Blazers spoil James’ debut with 128-119 win over the Lakers 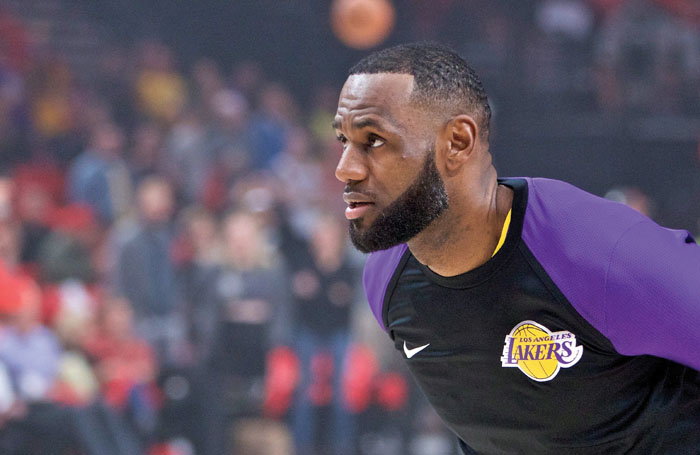 By ANNE M. PETERSON, AP Sports Writer
PORTLAND, Ore. (AP) — LeBron James opened with two thunderous dunks and had 26 points and 12 rebounds in his first game with the Los Angeles Lakers, but the Portland Trail Blazers prevailed 128-119 Thursday night in the season opener for both teams.
Damian Lillard had 28 points and Nik Stauskas came off the bench to score 24 for Portland, which won its 18th straight home opener to extend an NBA record.
It was the Blazers’ 16th straight victory over the Lakers.
The opening festivities were tempered by the death this week of Trail Blazers owner Paul Allen. A “Rip City” baseball cap rested in Allen’s courtside seat with a single rose.
The enigmatic co-founder of Microsoft died Monday in Seattle from complications of non-Hodgkin’s lymphoma. He was 65. There was moment of silence before the game and tributes to Allen throughout the night.
On the court, the focus was all on James. His monster dunks to start stunned the Moda Center crowd while Nike co-founder Phil Knight looked on from courtside seats.
James signed a four-year, $153 million deal with the Lakers as a free agent in the offseason after winning three NBA championship rings and taking his team — Miami and Cleveland — to the NBA Finals for each of the last eight seasons.
The four-time league MVP joined a revamped group that includes veterans Rajon Rondo, JaVale McGee, Lance Stephenson and Michael Beasley, as well as a young core of Brandon Ingram, Lonzo Ball, Kyle Kuzma, Josh Hart and rookie Moe Wagner.
While the Lakers made big changes in the offseason, the Trail Blazers returned all five starters from a team that finished third in the Western Conference last season — including the nucleus of Lillard, CJ McCollum and Jusuf Nurkic.
James’ putback gave Los Angeles an early 25-15 lead. He played just under nine minutes in the opening quarter and led all scorers with 13 points.
Portland closed the gap and pulled in front 46-40 on Stauskas’ 3-pointer. Stauskas, who signed with the Blazers as a free agent this past summer, led all Blazers with 16 points in the opening half. The Blazers pushed the lead to 11 points at but led just 65-63 at the break.
James had 18 points but collected a third foul with 6:04 left in the half.
Kuzma’s dunk got the Lakers within 79-78 with just more than four minutes left in the third quarter. Hart’s 3-pointer — the Lakers’ first of the game — put Los Angeles up 85-83. The lead was short-lived, but Portland had just a 93-91 advantage going into the final quarter.
Stauskas hit a 3-pointer that put Portland up 107-100 with 7:22 left. After it fell, he turned to the crowd and pounded his chest. McCollum’s 3-pointer with 5:01 left put Portland up 114-104.
Caldwell-Pope’s 3-pointer with 30.7 seconds left got the Lakers within 124-118, but Stauskas made a pair of free throws and Los Angeles couldn’t catch up.
TIP INS
Lakers: Lakers coach Luke Walton said that Ball would continue to be on a playing-time restriction after having an offseason procedure on his knee. Ball played 20 minutes and scored seven points.
Trail Blazers: With Maurice Harkless dealing with a knee injury that bothered him in the preseason, Blazers coach Terry Stotts started Jake Layman against the Lakers.
HONORING ALLEN
On the edge of the Blazers court was painted PGA with a Rose, and the Blazers had similar patches on their jerseys to honor Allen. Stotts talked before the game about all the people Allen had touched. “Everybody talks about his philanthropy throughout the years, and what he’s done. When people started writing about it, and listing all the things and all his accomplishments and the impact on millions and millions of people, and the environment, the earth and everything — it’s hard to put into context, the magnitude,” the coach said.
ALL EYES ON US
With James joining the team, the Lakers are certainly dealing with greater scrutiny with a huge media contingent on hand for his debut.
“We’ve talk about it, not to let it be a distraction. We’re not going to let it influence what we’re trying to do on this team,” Walton said. “In fact, we’re trying to use it as something to grow a bond in our group. Our theme is to truly believe in the idea that it’s just us, just us that are in here working, just us that are getting better.”
UP NEXT
James will make his Lakers home debut against the Houston Rockets on Saturday.
The Blazers host the Spurs on Saturday.
___
More AP NBA: https://apnews.com/NBA and https://twitter.com/AP_Sports