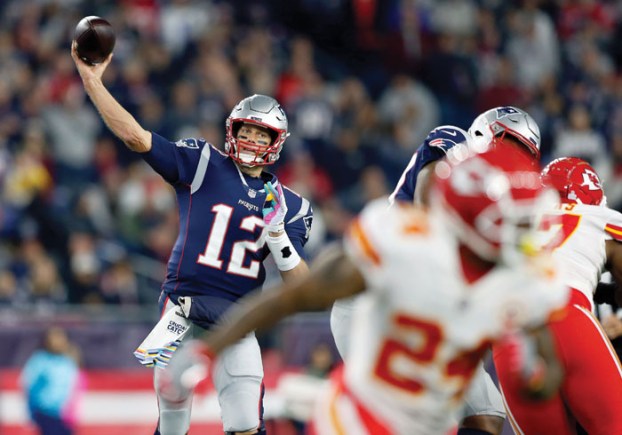 ICYMI in NFL Week 6: Mark your calendar for Brady-Mahomes II

Anyone who missed the Game of the Season — Tom Brady and the New England Patriots 43, Pat Mahomes and the Kansas City Chiefs 40 — can take solace in knowing there very well could be a rematch a little more than three months away.

And no one, except for players on other AFC teams, would be disappointed if Jan. 20 brings the world Patriots vs. Chiefs II, with a conference title and Super Bowl berth at stake.

“I’m sure,” Patriots linebacker Dont’a Hightower said about Mahomes, “we’ll probably see him down the road.”

Brady’s take on the KC QB who gave coach Bill Belichick’s defense all it could handle?

That’s an apt description of the whole contest Sunday night.

“It was a spectacle, that’s for sure,” Patriots receiver Josh Gordon said.

Just the sort of thing the NFL wants nowadays.

All attention on the passers and their targets.

Brady was 24 for 35 for 340 yards, one TD pass, one TD run, and a 39-yard completion to tight end Rob Gronkowski, whose 500th catch in the league set up Stephen Gostkowski’s go-ahead field goal on the final play. That came after Mahomes — 23 for 36 for 352 yards, four touchdown passes, a pair of picks — found Tyreek Hill for a tying 75-yard score.

The Patriots (4-2 and winners of three in a row) kept responding to every score Mahomes generated down the stretch.

The teams combined for 30 points in the fourth quarter alone.

It was back-and-forth. It was electrifying. It was memorable.

It was the 200th career regular-season victory for the 41-year-old Brady, a record for a starting quarterback.

It was the first career loss as an NFL starter for the 23-year-old Mahomes, who suddenly has become a bona fide star.

“He’s young,” said Hightower, who had an early interception, “but he definitely doesn’t show it.”

In case you missed it, here are other top topics after the NFL season’s sixth Sunday:

BACK TO THE BOOTH?

Jon Gruden’s return to the sideline from the TV booth continues to be an unmitigated disaster — on the field and off. His Oakland Raiders dropped to 1-5 by putting up little resistance in a 27-3 loss to the Seattle Seahawks. No one in the 32-team NFL has a worse record than the Raiders, whose only victory came against the Cleveland Browns. And no one has a worse point differential than Oakland, which has been outscored by 66 points after merely six games. There’s more, too. Gruden has been blasted for trading away elite linebacker Khalil Mack and had to answer questions after Sunday’s setback about a report that receiver Amari Cooper is available now.

Never a good thing when a QB’s completion count is exceeded by the number of times he’s sacked, but that’s exactly what happened to Marcus Mariota in the Tennessee Titans’ 21-0 loss to Terrell Suggs and the Baltimore Ravens. Suggs had one of Baltimore’s 11 sacks, one shy of the NFL record. Mariota went 10 for 15 for 117 yards. “I can do a better job of stepping up in the pocket,” Mariota said. “I put our guys in a bad spot, trying to run around too much.”

That was the familiar chant heard at Washington’s home stadium as its 23-17 victory over Cam Newton and the Carolina Panthers wound down. The Redskins (3-2) host the NFC East rival Cowboys (3-3) next week, and the matchup becomes a lot more intriguing thanks to what happened Sunday. Coaches Jay Gruden and Jason Garrett both were heavily criticized recently. Washington’s defense and Dallas’ offense were coming off problematic performances. And those units were both what generated victories, including Dak Prescott’s two-TD-pass, 82-yard-rushing showing as the Cowboys beat the Jacksonville Jaguars 40-7.

CATCH AS CATCH CAN

No NFL team wanted Adam Thielen coming out of college. And no NFL player ever started a season quite the way the Vikings’ undrafted receiver has this one. With 11 catches for 123 yards and a score in Minnesota’s 27-17 win against the Arizona Cardinals, Thielen raised his total to 58 catches, a league record through a half-dozen games. He’s also the first player in 57 years with at least 100 receiving yards in each of his club’s first six games.

By Mike London mike.london@salisburypost.com MOUNT ULLA — It was 6:39 p.m. when Cox Mill senior Jaelyn Leak finished off a... read more