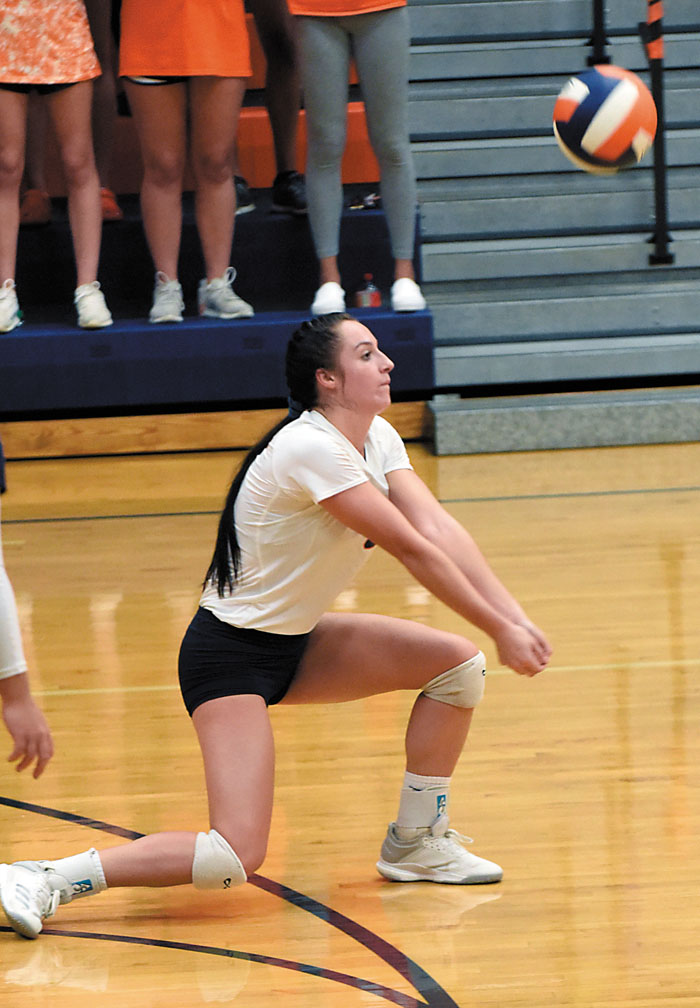 “Disappointing because we’ve just had some of our best practices of the year and we’d really prepared,” West coach Jan Dowling said. “But this is the second time we’ve come to Carson’s gym this year and not taken care of the ball. You’ve got to want it, and we didn’t want it as much as South Iredell did.”

Carson and West Rowan shared the regular-season title. The tournament is a tiebreaker for determining playoff seeding.

This was the third time West Rowan and South Iredell have played five sets.  South Iredell beat West in Troutman on Sept. 24 and pushed the Falcons to the limit in Mount Ulla on Oct. 2.

“This was the kind of match we’ve had all year in our league,” said South Iredell coach Megan Skouby. “The NPC is a great league with great players, and you have to show up and play your best to have a chance. We feel like we’re a very good fourth-place team, but we had a few injuries and when you let a game slip away from you in this league you can drop two spots overnight.”

The Vikings came out with more fire, jumped all over West, 13-3, and easily took the first set. Emily Long and Marissa Meyerhofer piled up kills.

That was a wakeup call for the Falcons (17-4). KK Dowling got energized in the second set, Hannah Pratt did some outstanding digging, and the Falcons were able to pull it out. Dowling smashed key kills to tie the set at 22-all and to put West ahead, 24-22.

But South Iredell wasn’t going away. Malina Harris contributed a momentum-shifting block in the third set and Meyerhofer finished it with a dink over the outstretched arms of Kelcie Love and Ava Link.

Backs to the wall, West responded and pulled out the fourth set. Dowling had the kill that ended it.

In the fifth set to 15, West scored six straight to go from down 5-2 to up 8-5. Back-to-back blocks by Link and Love fueled that surge. When Link got a kill for an 11-8 lead and Dowling soared for a stuff block, West was up 12-8, and it looked like the Falcons would survive.

West was still ahead at 13-10, but a kill by Savannah Harris and an ace by Malina Harris turned the tide. South Iredell scored the last five points of the set — and the match. Meyerhofer went high and blocked Dowling for match point.

“Down like we were in the fifth set, we showed a lot of heart and grit to come back,” Skouby said. “I couldn’t ask for more effort than our girls gave.”

Tori Hester had 23 kills and nine digs for the Falcons. Dowling had 15 kills and 11 digs. Pratt had 15 digs. Link had 26 assists and 11 digs. Allison Ennis made some great digs and contributed 18 assists.

“We didn’t have a good day, but you have to credit South Iredell,” Hester said. “They were really good and they wanted it.”

West should  get a solid seed and should be at home for the first round of the playoffs on Tuesday. That’s important because the Falcons are 11-0 at home.

The key to Carson’s sweep was holding off a terrific comeback by North Iredell (11-7) in the first set.

The Cougars (23-3), who had been swept by North Iredell on Sept. 27,  rolled to 10-point leads early, but North Iredell settled in and slowly fought back. The Raiders had gotten all the way back to 22-20 and momentum was swinging fast, when senior Nancy Gamewell came through with a big block for the Cougars.

“We had rough stretches, but we just tried to focus and push through,” Gamewell said. “We work on blocking a lot, and it paid off with a point when we really needed it.”

Jaden Vaughn followed with a kill, and Carson hung on.

In the second set, Carson took a 7-2 lead, but again the Raiders rallied behind the athletic trio of Mackie Allen, Karli Grey and Mayson James.

With the Cougars down 22-21 and fighting to stay afloat, Gamewell delivered another game-changing block. Alayna Slusser punched a kill for a 23-22 lead, and Weast ended the set with two booming serves.

“We knew how good North Iredell is,” Weast said. “We had good energy and we played very hard. We knew if we didn’t play hard, we wouldn’t win.”

The third set wasn’t easy, but compared to the first two it was a breeze for the Cougars. Weast was outstanding.

“It was one of those days where we started sets strong and finished them strong, but we weren’t very good in the middle,” Carson coach Kelan Rogers said. “We did enough to beat a very good team. We made mistakes, but we had a very good passing day. We had five or six girls passing well and when you’ve got that, you’ll get your share of kills.”

Weast had 16 kills and 11 digs. Gamewell had five blocks and four kills. Grace Thomas had 31 assists. Katie Blackwell had two aces and 15 digs. Kary Hales had 26 serve-receives and 15 digs. Vaughn had 10 kills, and Slusser had three.

Carson will take on South Iredell at 10 a.m. on Saturday in the Carson gym. Carson has won nine in a row and hasn’t lost in October.