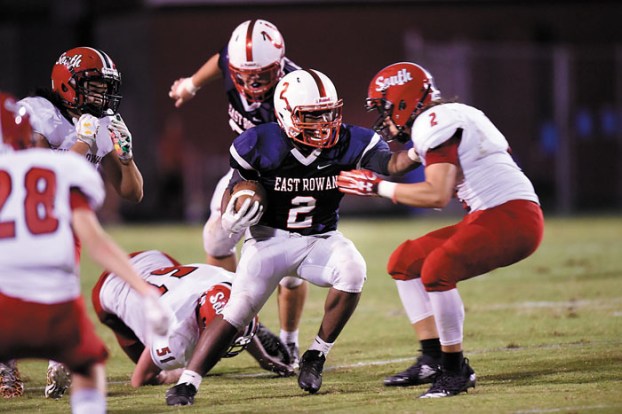 Wayne Hinshaw file photo/for the Salisbury Post ... East Rowan running back Sammy Pinckney (2) picks up yardage against South Rowan on Aug. 24, as the Raiders’ Christian Reynolds (2), right, comes in for the tackle. Pinckney rushed for 149 yards and two TDs Monday night against Carson.

GRANITE QUARRY — It’s never a bad thing to be mentioned in a conversation that includes Walter Payton, Jim Brown and Adrian Peterson.

Those are the names dropped by East Rowan football coach John Fitz while discussing surprise-package running back Sammy Pinckney, the sophomore who bumped and bruised his way for 149 yards and two touchdowns in Monday’s 28-21 win at Carson.

“I’m talking about style, not talent,” Fitz clarified. “He’s very tough between the tackles. He doesn’t dance around a lot. He just hits the hole and makes a cut. That’s how the best backs have always worked.”

It’s how Pinckney has operated this season — quietly, straight-forward with precision. At 5-foot-6 and 170 pounds, he’s a fight-for-everything rusher on pace to surpass 1,000 yards.

“That part surprises me,” said Pinckney. “I didn’t think I’d be close to a thousand yards. At the start of the year I was thinking 600, tops. It would be nice to get there, but my focus is on getting better as a player and helping the team win games.”

Clearly Pinckney prefers being a contributor to being a star, despite posting impossible-to-ignore numbers. Sledding behind an inspired offensive line, he’s rushed for 857 yards in seven games for the Mustangs (4-4, 1-1 NPC) and scored six touchdowns.

“He’s just tireless,” said teammate Christian Bennett, East’s third-leading rusher. “But he’s a different kind of kid, a unique kid who does things his own way. Everybody has their own style. His is different.”

Against Carson, Pinckney was more of a ricochet runner, turning foiled stuffs up the middle into seven-yard sling-shot gains along the edges. It helped produce his third straight 100-yard effort and fourth of the season.

“I’m just doing what the coaches tell me to do,” he said. “In practice they tell us to find as many holes as possible. I’m not trying to be like any other running backs. I’m just trying to be my own person — and whatever comes out on the football field comes out.”

Pinckney scored a pair of first-quarter touchdowns on Monday. The first came on a 4-yard burst off left tackle and the second on a 6-yard slice to the right side that gave East a 12-7 lead. Yet he spent most of the night colliding with defenders on short runs, shouldering contact on each of his 28 carries.

“Here’s the thing about him,” quarterback Logan Forbis said. “He just likes to run the ball and doesn’t care about getting hit. He’s got great vision, knows where the holes are and where his line is going to block.”

Pinckney’s most-prolific outing came in an Oct. 5 loss at West Rowan, where he zigged and zagged and pressed forward for a 228 yards on 41 carries, both career highs. “And I really wanted more,” he said at the time. “I’m not trying to be greedy. I just wanted the ball in my hands.”

Those words were spoken with honest-to-goodness passion, something he wears for all to see. Pinckney’s aw-shucks demeanor belies his driven, game-day intensity. Much of it stems from being promoted after playing in just one junior varsity game in 2017.

“I had an interception and scored a touchdown, I think on the second play of the game,” he recalled. “Moving up to varsity as a freshman was a learning process. The tackling is totally different. Bigger dudes, faster, better technique. They know how to tackle a running back.”

Fitz, of course, has enjoyed his watching Pinckney’s sudden maturation and development.

“Usually 15-year old kids don’t figure it out as fast as he has,” the coach said. “But Sammy understands the work ethic it takes to do this successfully. He’s very consistent and his practice tempo has increased. He knows he has to practice as close as he can to game speed. That’s what’s going to make him better.”

And perhaps, years from now, included in someone else’s conversation about great running backs.