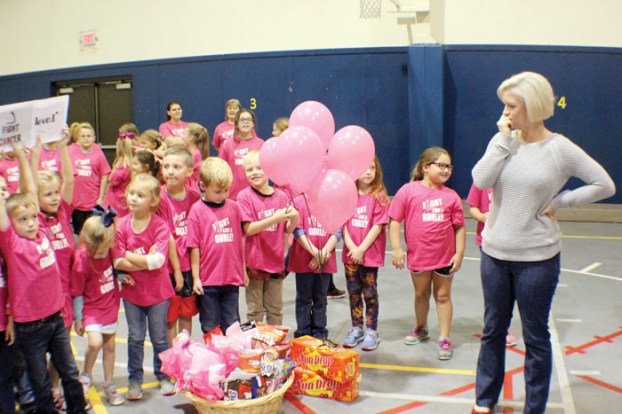 Grace Academy kindergarten teacher Chandi Gurley was surprised by students/staff on Wednesday who were all wearing pink T-shirts that said Fight Like a Gurley. Gurley, 37, was diagnosed with cancer earlier this year. She ended radiation treatment this week. Submitted photo

ROCKWELL — Grace Academy kindergarten teacher Chandi Gurley thought she was going to a meeting to discuss a new student Wednesday morning. Then she was met with a sea of pink T-shirts worn by students and faculty with a message about exactly what she’s been doing for the past six weeks: “Fight Like a Gurley”

The 37-year-old has been undergoing radiation treatment for breast cancer. She has a genetic mutation that makes her more susceptible to breast and ovarian cancer.

Gurley just wrapped up six weeks of radiation treatment on Tuesday. So as a surprise, the teachers and staff members at the school wore shirts with the Fight Like a Gurley slogan, which is a play on the popular breast-cancer support shirts that say “Fight Like a Girl.”

Meredith Teeter, whose son Hunter is in fourth grade at Grace Academy, came up with the idea to celebrate Gurley upon completion of radiation treatment. Hobby Lobby and Granite Knitwear made it possible to obtain pink T-shirts for 55 students and about 30 teachers and staff members, said school Director Frank File.

“She wanted to make sure the first week of school was ‘normal,’ and she delayed treatment,” File said.

The school staff kept the plan quiet and filed everyone into the gym to surprise Gurley.

“She had no idea. It all worked out,” File said.

Gurley, who is in her second year of teaching at Grace Academy, did not miss a day of school while undergoing treatment.

Gurley had a relative who was diagnosed with cancer after undergoing genetics tests, so she got tested as well. After learning of her genetic predisposition to ovarian and breast cancer, Gurley decided to do a self-exam and discovered a lump. She made a doctor’s appointment the next day.

During that appointment, Gurley had a mammogram and MRI that confirmed cancer.

Gurley had a lumpectomy to remove the tumor followed by six weeks of radiation treatment five days a week. On Tuesday, she completed her final treatment. She’ll return to the doctor in November for a lab check-up and possibly remain on medications for a little longer.

“It’s so overwhelming,” Gurley said of her Wednesday surprise.

Most women 40 and older are urged to have regular screenings and yearly mammograms, but Gurley urges those around her and beyond to first check themselves, then get checked by a doctor. She said it is worth the cost to have genetic testing, which led to her confirmed diagnosis.

“That’s been the biggest blessing. If you can make one more person get checked, their odds are better for a cure,” she said.

Gurley describes herself as someone who doesn’t want the spotlight on herself. But she feels as though she’s been able to educate others and hopes that if going through her diagnosis and treatment can save someone else, that is worth shining a light on herself.

No one else in Gurley’s immediate family had ever had cancer. But because she has the genetic mutation, her daughter Kylee, 13, will get tested when she’s 18. If her sons have daughters, they will also be tested.

Not only did Grace Academy have T-shirts printed, but the school gave her a gift basket. The staff also worked with Gurley so she could leave work early to have the radiation treatment. The school rearranged her class to cover all her lessons. Students would go outdoors for recess at the end of the day with another teacher or volunteer while Gurley had treatments in Concord.

Her daughter’s school, Rockwell Christian, had a surprise volleyball tournament they called “Dig Pink” in her honor.

She said the parents of Grace Academy have been patient and understanding.

“I’ve been blessed with a good school,” Gurley said.

Her church family at Grace Baptist in China Grove brought her dinner so she didn’t have to worry about cooking for her family. The radiation made her extremely tired. Most days, she would leave school, have treatment, pick up her children from school, make sure they were OK at home and take a nap.

“I really couldn’t have asked for anything better. It was beyond what I would’ve expected,” she said.

Made in America: Oglethorpe, with help from his friends, has become a true toy soldier