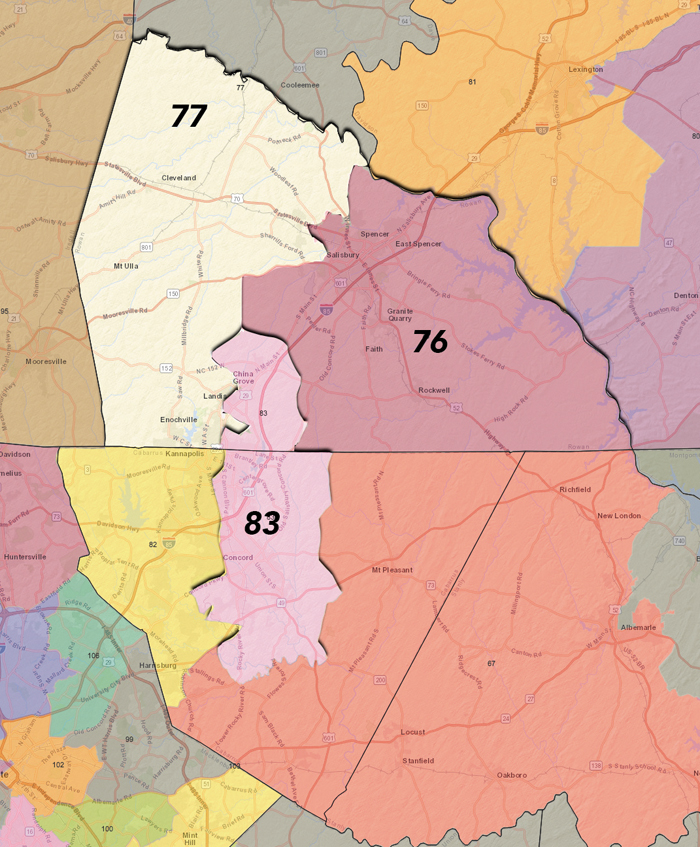 Screenshot of Rowan redistricting for the North Carolina House of Representatives.

New Jersey has so many turnpikes — so the story goes — that when two people from the state meet for the first time, they don’t talk about the cities they’re from. Instead, they ask each other, “What exit?”

Rowan County has so many legislative district lines running through it that residents planning to vote this fall can’t debate candidates with each other until they answer the basic question: What district?

Legislative district boundaries have been drawn and redrawn so often that it’s easy to get confused. The more lawmakers, political parties and the courts wrestle over redistricting, the harder it gets to keep track. This undermines our democracy. People tend to avoid what they don’t understand.

If you’re wondering why your ballot has the name of a Mocksville representative on it for the first time this year, or you want to know what happened to the state senator who disappeared from your ballot — well, it’s a long story.  Here’s a brief rundown, as we understand it:

• State Senate: Right now, Rowan is represented in the state Senate by Dan Barrett of Davie County and Tom McInnis of Rockingham, in districts 34 and 25, respectively. That ends very soon. Effective with this election, Rowan will be wholly contained in a completely different Senate district — 33 — along with all of Stanly County. The candidates for this seat are Republican Carl Ford of China Grove and Democrat Arin Wilhelm of Granite Quarry. Regardless of who wins, we’ll have a senator with a Rowan address for the first time in more than a decade.

McInnis is seeking re-election in the 25th, but the new district will include Anson, Richmond, Moore and Scotland counties now — and not any part of Rowan. Barrett lost his primary bid to represent the 31st district.

• State House: For several years, Rowan has been represented by Ford (now a Senate candidate) in the 76th state House District, and Harry Warren in the 77th. Henceforth, though, Rowan will be split into three House districts.

77th: Most of Warren’s old district will be paired with Davie County, and the election there is between veteran Republican legislator Julia Howard of Mocksville and Democrat Bonnie Clark of Harmony. Howard, first elected in 1988, has been representing the 79th District, which had Davie and part of Forsyth.

83rd: A slice of southern Rowan will be part of the 83rd district, now represented by Larry Pittman of Cabarrus County. A Republican, he faces Democrat Gail Young of Concord in the election.

So it goes with our delegates to the General Assembly. The Post will publish more stories about the candidates and their stands in the days to come. The stories will be repackaged into a Voters Guide to be included in the paper on Sunday, Nov. 4.