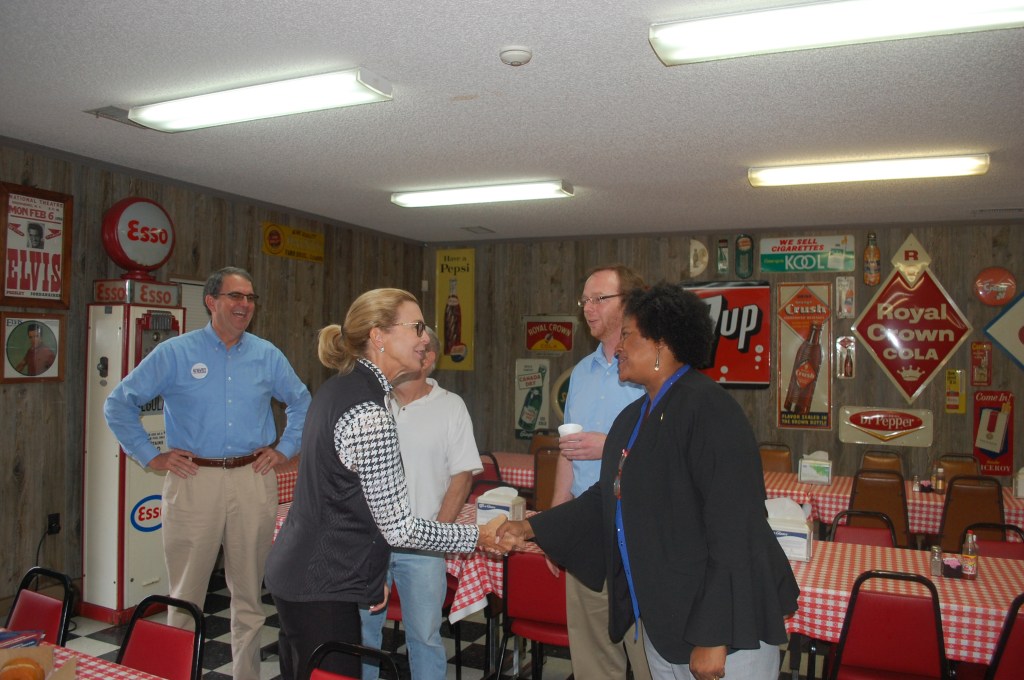 CHINA GROVE — Frank McNeill, the Democratic candidate for U.S. House in District 8, made a campaign stop at Gary’s BBQ on the first day of early voting Wednesday.

McNeill, who is running against Republican incumbent Richard Hudson, spoke about his platform of lowering health care costs, improving public education, tackling the opioid epidemic and helping veterans. He said he wants to take his experience of working together to Washington.

“The thing you learn when you’re mayor is you work with folks to get things accomplished,” McNeill said. “You actually get something done. If there is a pothole, you’ve got to fix it. If you need to expand a water line, you get it expanded.”

McNeill, a former mayor at Aberdeen in Moore County, said working in business and local government has prepared him to be a congressman.

“We need to have folks in Washington that are going to work together to get things done for us, the citizens, in particular our district,” McNeill said. “I can do that. I’ve proven that in the past, both in business and government elected office. I look forward to doing that as our congressman.”

He said he would approach the position with something he thinks is needed: civility.

“I’m used to working with people, treating folks with respect. And if you and I disagree, that’s fine. But I don’t call you a name or tell you how awful a person you are,” McNeill said. “We need folks in D.C. that can act in a civil manner with each other — decency, kindness, hard work. Those are the things we need our elected officials to do. I can do that.”

He said he knows going against a incumbent is a challenge and he and his team have concentrated on a grassroots approach by knocking on doors, handing out literature, making phone calls and being out in the community to meet voters.

“Congress itself has a maybe 15 percent approval rating, and yet 95 percent of the incumbents get re-elected,” McNeill said. “It just doesn’t make sense. And so I think people think, ‘Well, Congress in itself is terrible, but my representative, they’re the only good one there.’ I think more than really liking their incumbent is the fact that they have so much money and recognition. It’s a tall hill to climb.”

McNeill spoke about the possible blue wave for Democrats and its impact on him.

“The blue wave isn’t going to just happen,” he said. “It’s going to take people knocking on doors, making phone calls, talking to their neighbors and family. It takes an energy to create a wave, but I think that’s happening. It’s a lot of excitement out there in particular amongst the volunteers and the people I’ve been talking with. I think they’re ready for some new faces in Washington. That is the single biggest issue we hear from people, is just the dissatisfaction with the tenor in D.C., the way that the government is not working together.”

He said until the Nov. 6 election, his team has one main goal: “to encourage the Democratic voters to get out and vote.”

Legislative candidates meet in forum on eve of early…