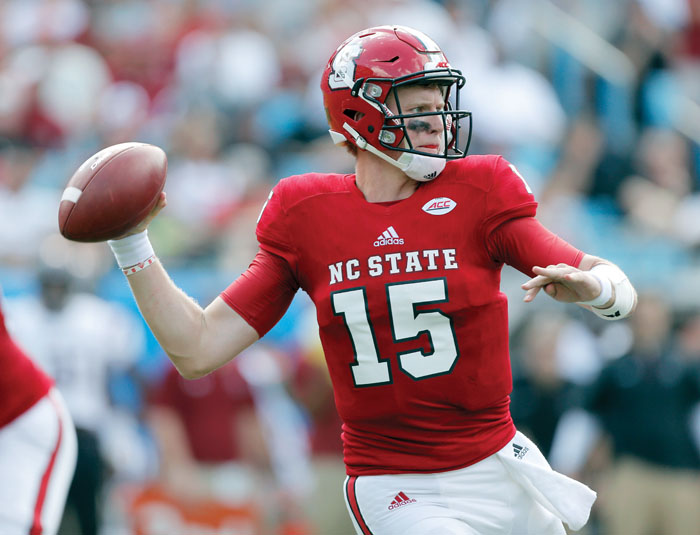 FILE - In this Sept. 2, 2017, file photo, North Carolina State's Ryan Finley (15) looks for an open receiver against South Carolina during the first half of an NCAA college football game in Charlotte, N.C. Coach Dino Babers has led Syracuse to a surprising 4-2 record midway through the season, while Clemson and North Carolina State, led by quarterback Ryan Finley, are undefeated entering a big showdown this week. All drew attention in midseason voting by AP writers covering the 14 ACC teams. (AP Photo/Bob Leverone, File)

ATLANTA (AP) — This has not been a run-of-the-mill first half of the season for the Atlantic Coast Conference.

Sure, No. 3 Clemson looks as strong as ever, but who saw a change coming at quarterback while the Tigers were undefeated? That’s only one of the ACC’s surprises that set the pace for some unlikely highlights and low points midway through the season.

Meanwhile, Louisville and Wake Forest are still looking for their first conference wins, Florida State and Georgia Tech are at or near the bottom of their respective divisions, and Syracuse is more competitive than most experts predicted.

Clemson, North Carolina State and Syracuse were among the teams drawing attention in midseason voting by Associated Press writers who cover the 14 ACC schools in 10 states.

The results in several categories:

The Tigers are winning as expected, but Swinney has earned his pay. He has managed to keep Clemson players focused through the drama of quarterback Kelly Bryant’s transfer before facing Syracuse and the switch to Lawrence . The ability to win during that transition shows Swinney’s program is built on a solid foundation.

OFFENSIVE PLAYER OF THE YEAR

Finley has thrown for 324.2 yards per game to easily lead the league. He has four 300-yard games with 10 TD passes and only three interceptions. And he has a bright future on Sundays, according to Swinney.

“He is a legit pro,” Swinney said. “I don’t know when he’s going to be drafted, but it’s going to be early. He is a very good football player. We’ve had the chance to see him, obviously, the last couple of years, growing into his role. He has complete ownership of what they do. … He is a very gifted thrower, very accurate. And he has great command of everything they’re doing.”

DEFENSIVE PLAYER OF THE YEAR

Burns, a junior, has seven sacks to rank second in the league and is tied for the lead with three forced fumbles. He already is projected by some as a possible top 10 pick in the 2019 NFL draft.

FRESHMAN OF THE YEAR

Hartman was supposed to fill in while starter Kendall Hinton served a three-game suspension. Hartman has played well enough, ranking fourth in the league with his average of 209.8 yards passing, to keep the job as Hinton has been used at receiver.

Perkins is tied for second in the ACC with 11 touchdown passes. The dual-threat quarterback has passed for 1,217 yards and rushed for 402 yards and three scores.

“He’s an X-factor,” said Duke coach David Cutcliffe. “I’ve seen him leap players while running the ball. Literally over their heads. A guy from Louisville tried to tackle him and he literally hurdles his head and keeps running. He may be the fastest player on his team. He’s big. He’s strong.”

Syracuse (4-2, 1-2 ACC) has played beyond expectations and with a little luck could be undefeated. It followed a 27-23 loss at Clemson with an overtime loss to Pittsburgh.

Akers, a preseason all-ACC pick, is averaging only 60 yards a game, ranking 16th in the conference. He has yet to rush for more than 82 yards in a game.

A drop-off might have been understandable after losing 2016 Heisman Trophy winner Lamar Jackson. This has been more than just an off year. Coach Bobby Petrino’s team has hit bottom. Louisville is 0-4 in ACC games, including a 66-31 home loss to Georgia Tech.