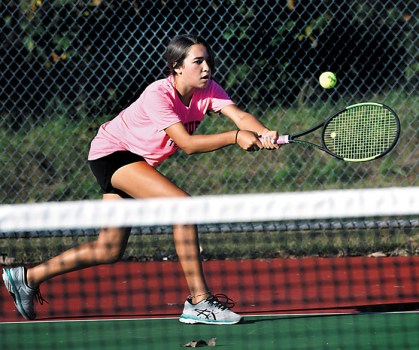 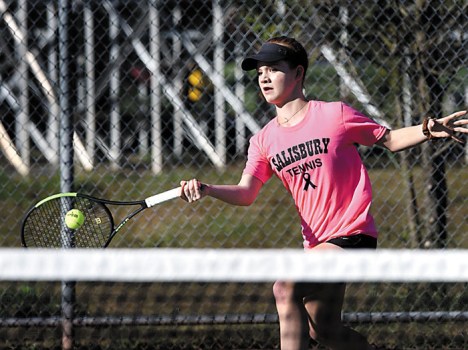 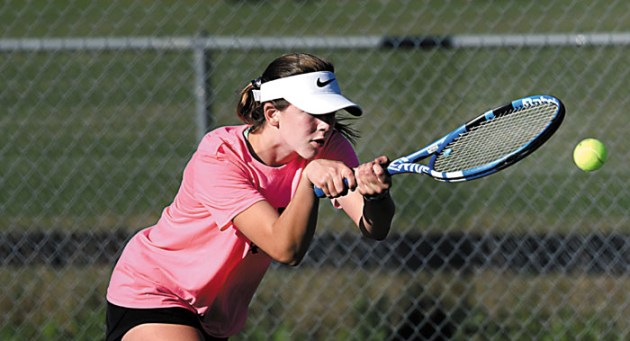 SALISBURY — Nobody knows where or when Salisbury’s encore run in the 2A state tennis playoffs will end, but we do know how it began.

“It’s a good win … I’m happy with it,” coach Milton Griffith said, after the Hornets (19-1) improved to 6-0 in October and earned a second-round match with East Montgomery next Tuesday at home. “I wasn’t happy with some of the play, but we’re dealing with a young team here. So while nothing really surprised me, it means we still have a lot of work to do — and a lot to learn.”

The triumph wasn’t secured until the second-doubles team of Skye Mowery and Margaret Thurman prevailed, 10-5, against Sommer Stephens and Area Leslie in a 10-point pro set, ending a match that took more than three hours to complete.

“We knew the situation,” said Mowery, a senior who also beat Leslie at fourth singles. “We knew it was 4-4 and coming down to us. That just seemed to make us more determined, more motivated.”

Thurman, one of four freshman among Salisbury’s top six, was admittedly rattled in her mistake-filled 6-2, 6-1 loss to Atkins junior Yinka Mason at No. 2 singles. She felt decidedly better after the clinching match.

“Just knowing Skye was there, that helped me,” Thurman said. “Having someone else on the court makes you more comfortable.”

Mowery and Thurman won the last three games in their doubles victory, including the clincher with Thurman serving. Her final smash was returned out-of-bounds by Stephens, setting off a boisterous celebration.

“I was hoping we could pull off the upset,” said Atkins coach Keith Mason, moments after his team finished with an 11-3 record. “But it’s our first time in the dual team states. We had a game plan and we had a chance, but we let it slip away.”

Atkins earned victories at first, second and third singles. Salisbury won at fourth, fifth and sixth, meaning this win-or-go-home match would be decided in doubles.

“I thought we could go 4-2 in singles,” Griffith said. “When it went 3-3, I was thinking it easily could go either way. It was scary.”

Salisbury’s win at third-doubles, the first to finish, lifted some of Griffith’s anxiety. Freshmen Sophie Chmiel and Sutton Webb teamed for an untroubled 10-1 nod over Camara Monea and Simran Vadgama. Next off the court was the first-doubles match, where Atkins lefty Diana Alexandrov coupled with Yinka Mason for a 10-3 win against Meredith Burton and Abby Campion.

“There’s a lot of pressure because they won the state last year,” said Chmiel, who bested Monea, 6-2, 6-1, at fifth singles. “You want to uphold that record. But I think we all came in prepared today, all 14 on the team were ready for the competition.”

Mowery, the team’s lone upperclassman, rallied from a 4-5 deficit to win the second set of her match with Leslie. “I was just trying to stay calm and get back into it,” she explained. “I started to place it a little better and tried to get under it a little more. That gave me more topspin, which made the ball kick up and gave her less reaction time.”

Singles-round losers for Salisbury included Burton — who was stopped 6-2, 6-0 by unbeaten senior Alexandrov at No. 1 — as well as Thurman and Abby Campion, who fell 7-5, 6-2 at No. 3. “I’m kind of disappointed,” she said after losing to Stephens. “It wasn’t my best day. That’s not an excuse, just the truth.”

The whole truth wasn’t revealed until the final match, a well-played set that featured Thurman’s precise serves and Mowery’s power shots that found the corners.

“This was one of our hardest matches,” Thurman concluded. “The rest are just going to be harder.”

NOTES: Atkins, a No. 2 seed out of the Western Piedmont Conference, had won its previous six matches. … Each of Salisbury’s singles players played up a slot because sophomore Emma Nianouris, it’s top singles player, has been sidelined with an illness the past month. Griffith expects her back for Round 2. …Mowery and Thurman won the CCC doubles championship last week. …The individual regional tournament is scheduled Friday at SHS.