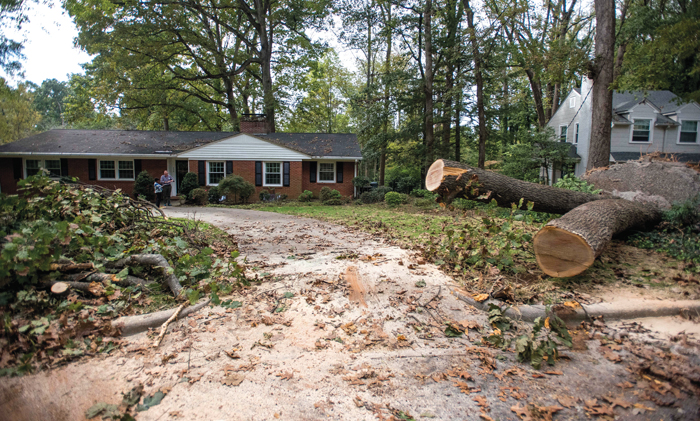 Daryl Bruner's home on West Colonial Drive in Salisbury was the last home in the Milford Hills neighborhood to have power restored five days after the winds from Hurricane Michael brought down a large oak tree in front of the house. Jon C. Lakey/Salisbury Post

SALISBURY — Daryl Bruner had the hardest time trying to get power restored to his West Colonial Street home. He and his husband, Phillip Burgess, lost electricity last Thursday during the storm associated with the remnants of Hurricane Michael.

The Milford Hills neighborhood was one of the last areas in Rowan County with a large number of residents still without power this week. Bruner’s power finally was restored about 2:40 p.m. Tuesday, but it wasn’t without him jumping through some hoops.

Bruner, who works at Catawba College, spent much of his fall break trying to get someone to talk to him about tree removal and power restoration. He, like many in Rowan County, did the only thing he knew to find out when electricity would be restored: He called the utility company. 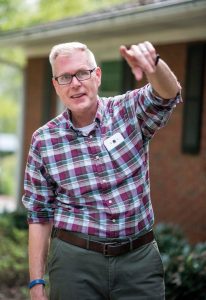 Bruner contacted Duke Energy and left his address on the automated customer service number. He also spoke with subcontractors at his home who were unable to restore power because they didn’t have the right equipment. He said he was promised that power would be restored along with the rest of his neighborhood by Monday night.

The power failure was caused about 2:30 p.m. Thursday when an oak tree was uprooted and fell onto utility lines between Bruner’s house and a neighbor’s. His home is toward the end of West Colonial Street close to Spring Street, where it dead ends.

“I kept checking. We were getting pushed down the list,” Bruner said.

He said he thinks the reason was that the utility line fed an area with fewer houses than in other areas of the county. Each time a work truck drove down his street, Bruner thought he would soon have lights. But each time, he was told the crew didn’t have the right equipment or didn’t have the right wire until the final truck left late Monday.

“It was kinda like a bad movie. We had three or four Duke people show up. They said they didn’t have the right equipment. They had to replace the cable line. One guy brought a line, and two hours later another person installed it,” Bruner said.

Bruner does have a gas-powered water heater, and he was able to keep food in a mini-refrigerator at his office at Catawba and heat food in a microwave.

Ironically, the tree that fell was tagged to be removed this summer by Duke Energy. Bruner said at some point, he noticed the tag had been removed and was told the tree was stabilized enough that it wouldn’t be a problem.

He also said he was not aware he had to have an electrician replace a damaged electric meter before the utility could attach wires to it.

Bruner said he would have preferred to talk to someone at Duke in person so that his problem could have been solved sooner.

A Duke Energy spokeswoman said customers who want to speak with someone can contact customer service at 800-777-9898. To report a power failure or other electrical problem, customers can call 800-Power-On and leave their address.

“If the meter box is pulled away from your business, house or mobile home service pole and you have no power, the homeowner/business owner is responsible for contacting an electrician to reattach the meter box and/or provide a permanent fix,” Miles said.

In some instances, an electrical inspection may be required by the county before Duke Energy can reconnect electricity.

Linda McElroy, communications director for the city of Salisbury, said city crews cleared what debris they could this weekend, but given the power line problems it would’ve been unsafe for them to work around downed power lines.