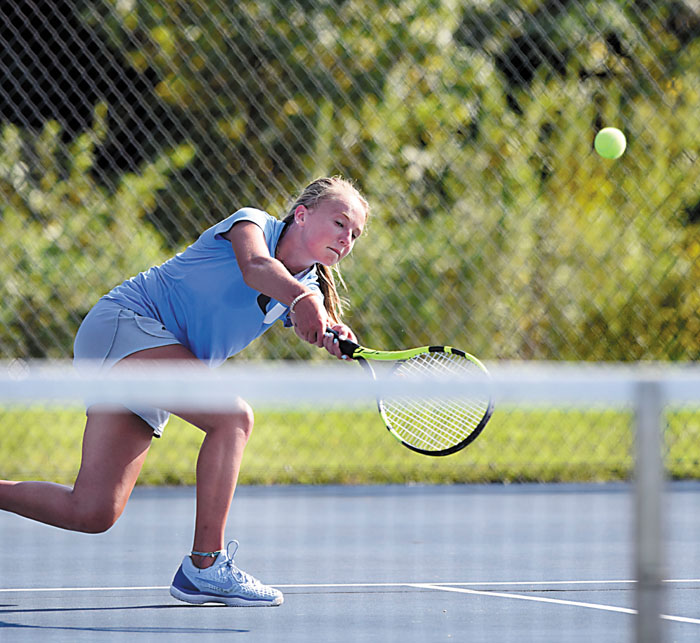 MOUNT ULLA — It was 6:39 p.m. when Cox Mill senior Jaelyn Leak finished off a marathon victory at No. 6 singles on Wednesday evening and ended West Rowan’s historic girls tennis season.

West sophomore Gracie Wise was giving up experience, foot speed and reach to Leak, but she fought as long as possible before losing 3-6, 7-5, (10-7). Wise was an injury replacement at midseason for junior Kelsie Crider, who broke a foot, and her teammates appreciated her effort. They’d gathered, sitting near the fence, to cheer on Wise, after their own matches were in the books.

North Piedmont Conference champion West (15-2) didn’t make it to doubles, losing to the Chargers, 5-1, in the opening round of the 3A dual team state playoffs.

“Cox Mill is really good and we knew they would be,” West coach John Brown said. “They could play for a while.”

Despite the sudden departure from the postseason, there were few long faces and fewer tears from the Falcons.

As soon as the brackets were released on Monday, West parents, players and Brown knew this would be an uphill struggle. The draw hadn’t been friendly. While it was officially the No. 2 seed from the South Piedmont Conference, Cox Mill is one of the better 3A squads. The Chargers actually had shared the SPC regular season and conference tournament championships with Concord before becoming a No. 2 by virtue of losing a coin flip.

“Our girls really aren’t that upset right now,” Brown said. “It’s upsetting when you don’t play well, but that wasn’t the case today. We played about as well as we could play.”

Brown says he’s coached five or six playoff teams, counting girls and boys tennis at West. All have been vanquished in the first round. Almost all of those teams got a miserable draw, but that’s something you can’t control.

“The best draw we ever got was when the boys were a wild card and went to Forestview and lost 5-4,” Brown said.

West’s No. 1 player, senior Payton Holt, is the strongest Rowan player and came in 16-0, but Cox Mill sophomore Hannah Jiang beat her 6-3, 6-2. Jiang, who combines precision with power, was a state semifinalist as a freshman.

“Hannah and Payton, that was a high school tennis match played at a very high level,” Cox Mill coach Adam Henry said. “That was a good tuneup for both of them with the 3A individual regionals coming up this weekend in Concord. Neither of those girls sees many matches like that in the regular season, but that’s the kind of competition they’ll see in the regional.”

Holt won the opening game in the first set, fell behind 4-1, scrapped back to 4-3, but then lost steam.

“In the second set, I got up 2-0 and should have made it 3-0, but that’s when I kind of lost control of it,” Holt said. “It’s the first time I’d ever played Hannah, although  I had played against her older sister (two-time 3A state runner-up Sarah Jiang).”

At No. 2, Cox Mill got a brisk win from Valentina Morales, who had played against Holt as the No. 1 for the Chargers two years ago. She handled Madison Smith 6-0, 6-2.

“I thought the matches at 4,5 and 6 would be tight today, but I  felt comfortable about us winning at 1,2 and 3,” Henry said. “I thought West’s girl winning at No. 3 was a major upset. She did a great job of dissecting the game, figuring out what was working and staying with it.”

That girl was freshman Lacy Waggoner, who grabbed the Falcons’ lone victory. Waggoner won a back-and-forth first set, 7-5,  then dominated the second set against Taylor Speicher, 6-1. Coach Brown had pointed out to Waggoner that Speicher employed a strong Western forehand grip and liked to strike the ball at shoulder height.

“That meant I needed to keep the ball low whenever I could,” Waggoner said. “I started winning points and she started getting mad and frustrated.”

All the matches at the lower seeds were competitive, but the Chargers (13-4) won them all. West’s Skylar Jahnke (pronounced Yonkee) lost 6-1, 6-4 to Kelly Campo. West’s Mira White, all arms and legs and goofy  socks, played another lengthy, hustling  match and was up for a while before falling 6-4, 6-3 to lefty Reilly Poe. West’s last chance to force doubles was Wise, on the court nearest the highway, but then that hope drifted away as an autumn wind blew in.

Henry sounded almost reluctant that his team didn’t get in some doubles practice.

“More tennis is always better than less,” he said.

While Holt will move on to the loaded 3A Midwest Regional, the rest of the Falcons called it a year.

It was quite a season, highlighted by the first conference championship in the sport in school history.

“Really proud of these girls,” Brown said. “I think South Iredell probably was a little better than us, but we beat them twice. That’s a great season.”