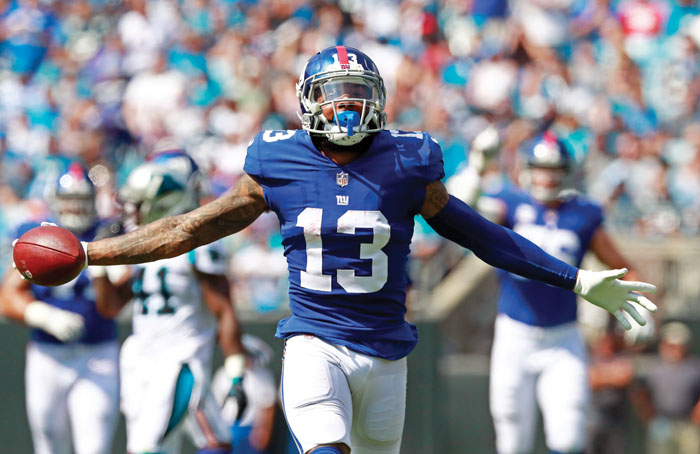 FILE- In this Sunday, Oct. 7, 2018, file photo, New York Giants' Odell Beckham (13) celebrates a catch against the Carolina Panthers in the first half of an NFL football game in Charlotte, N.C. The co-owner of the New York Giants is embarrassed by the team’s second straight 1-5 start and he wants star receiver Odell Beckham Jr. to make his highlights on the field instead of getting recognition from off-the-field comments. (AP Photo/Jason E. Miczek, File)

NEW YORK (AP) — The co-owner of the New York Giants is embarrassed by the team’s second straight 1-5 start and he wants star receiver Odell Beckham Jr. to make his highlights on the field instead of getting recognition from off-the-field comments.
Speaking before the fall meeting of the NFL owners Tuesday, John Mara was clearly miffed by the disappointments of a season he had hoped would make fans forget the 3-13 campaign a year ago that led to the firings of coach Ben McAdoo and general manager Jerry Reese.
New general manager Dave Gettleman and coach Pat Shurmur turned over more than half the roster, spent almost $80 million rebuilding the offense line, made Beckham the highest-paid receiver in the league with a $95 million deal and had high hopes heading into the season.
It hasn’t worked out and the biggest disappointment came Thursday when the struggling Super Bowl champion Philadelphia Eagles came to MetLife Stadium and embarrassed the Giants.
What made the loss even more disappointing was the Giants felt they were close to turning things around.
“I’m sick about it, particularly the way we’ve disappointed our fans,” Mara said. “To start out like this is very disappointing. I don’t think you ever expect to go 1-5 … two years in a row. I’m still embarrassed being 1-5. I can’t stand up here and make any excuses about that. We suffer as much as our fans, maybe more.”
Beckham had been on his best behavior this season, but the losing seemed to catch up to him in recent weeks. He did an interview on ESPN more than a week ago where he complained that Eli Manning was not throwing the ball down the field. He also questioned the heart of his teammates.
That did not sit well with Mara, who had spoken to Beckham about getting his act together in the offseason.
“I think he needs to do a little more playing and a little less talking,” Mara said. “I wish he would create the headlines by his play on the field, as opposed to what he says and does off the field.”
Beckham leads the Giants with 45 catches for 506 yards, but he only has one touchdown catch.
While the 37-year-old Manning has gotten most of the blame for the woes of the offense, Mara said a lot of players have to share the blame. He added that it would be up to Shurmur to decide if a change was to be made.
Mara believes Gettleman and Shurmur will turn things around, and he defended their choice of running back Saquon Barkley with the second pick overall in the draft.
“We went with the best player in the draft,” Mara said. “I still believe he’s the best player in the draft. I’m thrilled with what he’s accomplished so far, and I think the sky’s the limit for him.”
Barkley has rushed for 438 yards and four touchdowns and caught 40 passes for 373 yards and two TDs.
The choice has been criticized by some because the Jets took quarterback Sam Darnold with the third pick and they are 3-3.
___
More AP NFL: https://apnews.com/tag/NFL and https://twitter.com/AP_NFL