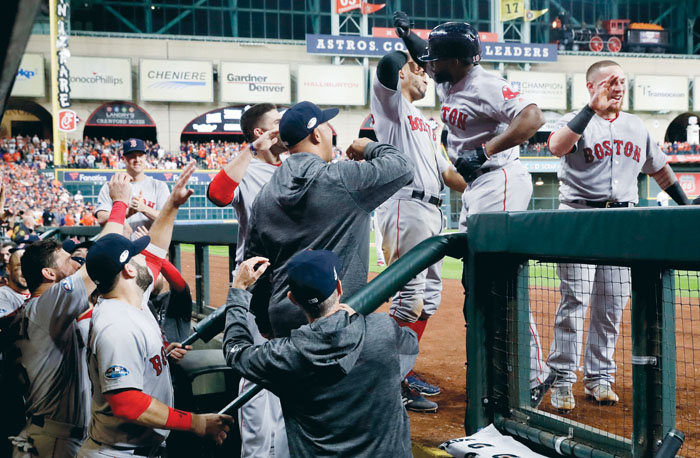 Boston Red Sox's Jackie Bradley Jr. celebrates in the dugout after his grand slam against the Houston Astros during the eighth inning in Game 3 of a baseball American League Championship Series on Tuesday, Oct. 16, 2018, in Houston. (AP Photo/David J. Phillip)

HOUSTON (AP) — Jackie Bradley Jr. didn’t let his demeanor change this season, even as fans begged Boston to trade him during a miserable first-half slump.

Stayed steady after the biggest swing of his career, too.

Bradley belted a grand slam for his second big hit in the AL Championship Series, helping the Red Sox beat the Houston Astros 8-2 on Tuesday for a 2-1 series lead. His low-key personality was on display as he rounded the bases without the hint of a smile. He greeted his screaming, excited teammates at home plate with one small jump and a few high fives.

“One of my coaches back in the day … said: ‘No one should ever know whether you’re winning or losing. Kind of keep the same temperament. That way, it will allow you to put some perspective into things,’” Bradley said. “And I kind of took that to heart.”

Bradley’s slam backed a solid start by Nathan Eovaldi, who hushed Houston a day after some social media smack talk from Alex Bregman.

“We can play at any park,” Eovaldi said. “The first game is always the biggest one of any series when you go on the road.”

Steve Pearce hit a tiebreaking homer for the Red Sox off Joe Smith in the sixth, a drive that sailed just inside the foul pole in left field for a 3-2 lead.

Bradley’s slam capped a five-run burst in the eighth against Roberto Osuna. The Astros closer got two outs but allowed two singles and plunked consecutive batters to force in a run. Bradley then crushed a 1-1 fastball into the right field seats to send Houston fans streaming toward the exits.

Osuna was acquired from Toronto this season while serving a 75-game ban under Major League Baseball’s domestic violence policy. He had a 1.99 ERA over 23 games for Houston in the regular season after he returned.

With his childhood hero and fellow Alvin, Texas, native Nolan Ryan sitting behind the plate, Eovaldi turned in another solid start. He allowed six hits and two runs with four strikeouts in six innings for the win in the second playoff start of his career.

“For him, I know it’s a special one,” Boston manager Alex Cora said.

Bregman had shared a video Monday on Instagram of Houston hitting back-to-back-to-back home runs off Eovaldi in his previous outing against the Astros in June. Eovaldi downplayed the post when asked about it Monday.

Bregman did much of the damage against Eovaldi, getting two hits, an RBI and a walk in three plate appearances. Bregman has reached base safely in 20 of 28 plate appearances this postseason.

“Eovaldi did a great job,” Bregman said. “He had really five pitches working for him. He’s tough. We knew that coming into the game.”

Bradley hit a three-run double during Boston’s Game 2 victory, giving him three RBIs in consecutive games for the first time in his career. Moments after his slam, fans at TD Garden in Boston began chanting “JBJ!” during the Celtics season opener against the Philadelphia 76ers.

Bradley had caught the ire of many Red Sox fans while batting .210 during the first half of the season.

“It’s a credit to him, because at this level, when you’re hitting .180 after two months or I think it was three months, it is hard,” Cora said. “And he kept showing up. He kept working. He kept working his craft. Now you see the results.”

Boston jumped on Dallas Keuchel for two runs in the first, but the Astros cut the lead to 2-1 in the bottom of the inning and tied it on an RBI double by Bregman in the fifth.

The Astros went 1 for 8 with runners in scoring position in the first home game of the series, which was played in front of a sellout crowd of 43,102 and included Astros Hall of Famer Jeff Bagwell and Houston Rockets stars James Harden, Chris Paul and Carmelo Anthony. Bregman’s double was the only extra-base hit for a team which entered the game having hit at least one homer in a record 14 straight playoff games.

Jose Altuve, at designated hitter on Tuesday because of a bruised knee, walked with two outs in the fifth and scored from first on the double by Bregman, which bounced past third baseman Rafael Devers and into the corner of left field to tie it at 2-2. Altuve also bunted for a single in the seventh.

Pearce nearly delivered an extra-base hit with two on in the third, but 5-foot-6 left fielder Tony Kemp jumped at the wall and came up with Pearce’s towering fly.

“That’s a completely different inning if he hits that ball a foot further or if Tony can’t get up on the wall and make that catch,” Houston manager AJ Hinch said.

Replays showed the ball may have clanked off the wall just before falling into Kemp’s mitt, but umpires upheld the decision when Boston challenged.

“It did hit the wall, but it was actually in my glove at the time,” Kemp said.

Morton will make his 2018 postseason debut. Morton, who spent time on the disabled list late in the season with shoulder discomfort, hasn’t pitched since Houston’s regular-season finale on Sept. 30. Porcello was scheduled to start Tuesday but was pushed back a game after he pitched in relief in Game 2.