What’s for dinner? How about a skillet pie with sweet potatoes? 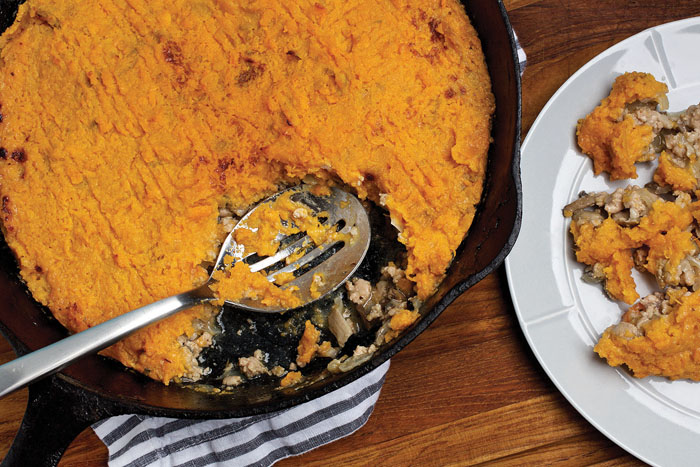 ith a layer of savory, seasoned chopped meat tucked beneath a creamy blanket, my healthful dish this week is like a shepherd’s pie — but one with the distinctive taste and look of autumn.

That fall-harvest vibe hits you as soon as you see the orange mashed sweet potatoes that crown this pie. And it is pushed further in that direction once you dig in and taste the thyme-flecked ground turkey beneath it.

Besides its distinctive flavor profile, this recipe has a lot to offer healthwise. It takes advantage of sweet potatoes’ inherent moist creaminess, so minimal butter is used in mashing them. And along with the bottom layer being lean poultry, it also has a bonus of meaty mushrooms in the mix. To minimize the dishes that need washing at the end — and add to the dish’s homey, rustic vibe — the layers are baked in the same skillet used to cook the turkey mixture.

I like to wrap a towel around the handle and set the skillet on a pad in the center of the table so everyone can help themselves.

Position oven racks in the upper and lower thirds of the oven, then preheat the oven to 350 degrees.

Place the sweet potatoes in a pot with enough water to cover them by about 2 inches. Bring to a boil over high heat, then reduce the heat to medium-low; cook for about 8 minutes, until the potatoes are fork tender. Drain the potatoes, then return them to the pot. Add the milk and 1 tablespoon of the butter; mash until smooth and creamy. Season with 1/2 teaspoon of the salt.

Heat the oil over medium heat in a 10-inch ovenproof skillet, such as a cast-iron skillet. Add the onion and carrot; cook for about 2 minutes, until they have softened a bit. Then add the mushrooms and cook for about 6 minutes, until they have released their moisture and it has evaporated. Add the thyme and turkey to the skillet and cook until the meat is no longer pink, breaking it up into small pieces with a spoon as it cooks.

Sprinkle the flour over the mixture and stir to incorporate, then add the broth, Worcestershire sauce, the remaining 1/4 teaspoon of salt and the pepper. Once the mixture begins to bubble at the edges, remove it from the heat.

Spread the mashed sweet potatoes evenly on top of the turkey mixture; dot the top with the remaining tablespoon of butter. Bake (upper rack) for about 15 minutes, until heated through.

Increase the oven temperature to broil; once the broiler element is fully heated, broil for 3 to 4 minutes so the top browns in spots.

Let the skillet pie rest for 5 minutes before serving.