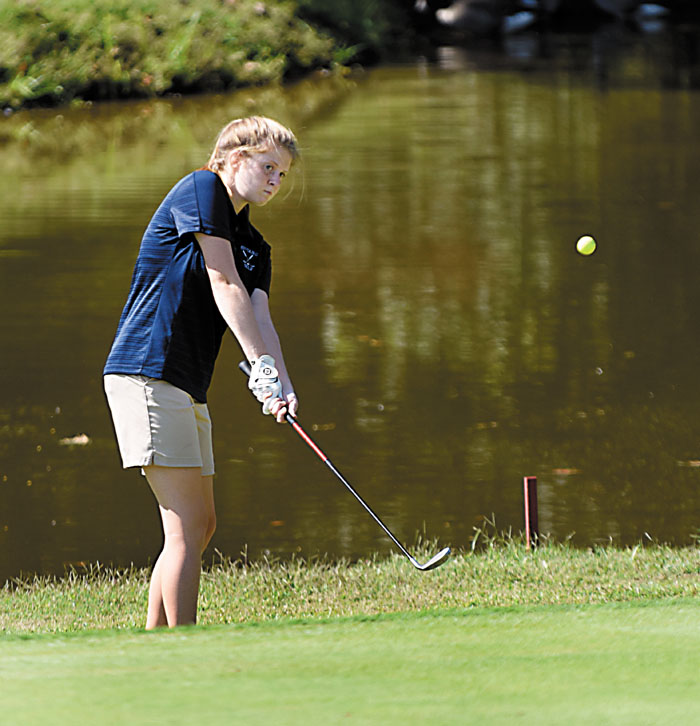 “They played smart, strategic golf,” East head coach Rhett Teems said. “They were steady. They avoided trouble on a course where there’s a lot of potential trouble. There’s lots of water and a lot of fairways are lined with woods.”

Competing as individuals, Carson’s Sophia Brown shot 92, while Kaiya Addison shot 98. Brown was one of 17 individual qualifiers to advance to the state event.

Northwood’s Katharina Floyd, who tied for second in the state meet in 2017, shot 71 for individual honors.

Teems said the Greensboro National course was in surprisingly good condition after the hurricanes. He commended those who worked to get the course in shape.

The front nine is easier than the back. There also was a considerable amount of wind to deal with when the Mustangs reached the back nine.

Corriher’s putter was cold early, but she got that under control.

It was fairways and greens for Fraley, who sailed along with very few issues.

“This was probably the most complete 18 holes I’ve ever seen Carmen play,” Teems said.

East was able to qualify Corriher and Fraley for the state tournament as individuals last year, but the Mustangs didn’t make it as a team.

This time Fesperman gave them the third score they needed.

“On the back nine here, you have to hit it really straight or you want to hit a fade (left to right),” Teems explained. “Hailey’s tendency is to hit a draw (right to left), and she was finding some trouble. She had a few rough holes on the back nine, but she hung in there and played steady. She gave us a good team score.”

It’s been a banner year for the Mustangs, the North Piedmont Conference and Rowan County champs, and now it continues.

The 3A championships are next Monday and Tuesday.