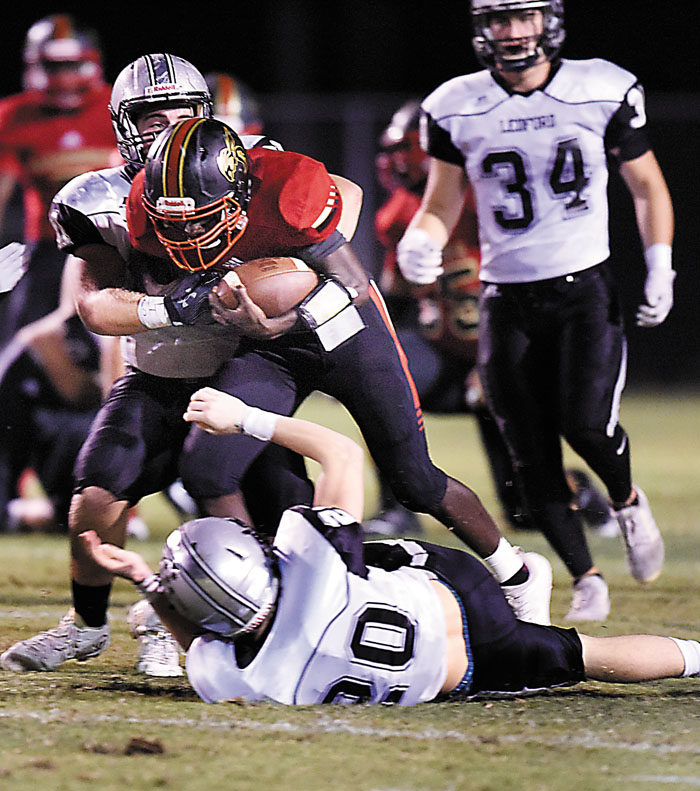 SALISBURY — Even as Ledford went into victory formation, a homecoming crowd at Ludwig Stadium roared, applauding the efforts of the home team.

“I’m thrilled to get out of here with a win on the road and on their homecoming,” Ledford head coach Chris Adams said. “Salisbury is a really good football team, they had a great plan defensively, and this was a really tough, rugged football game. This was a very hard one to play in a week when we’re going to be playing twice. We’ve got bumps and we’ve got bruises, and we’ve only got three days to rehab.”

Salisbury was one false-start penalty in the fourth quarter from making things really interesting. Down 11-3, the Hornets had the ball at the Ledford 1-foot line when that false-start flag pushed them back back to the 5. Next came an errant snap, and Ledford came up with the recovery after a rolling dogpile.

Robert Little, a lethal inside linebacker who was called upon to shoulder most of the rushing load, and Coleman Reich, a laser beam in the Ledford secondary who is headed to UNC, made key plays for the winners, and the Panthers’ physical foot soldiers won the majority of the fierce battles in the trenches against a young Salisbury squad.

“I think we took a good step because we had a realistic chance to win against one of the better 2A teams in the state,” Salisbury head coach Brian Hinson. “I’m really proud of my kids and the progress we’re making, but we’ve still got another step to take. Somehow, someway, we’ve got to beat one of the really good teams and win a game like this.”

Both teams are better without the ball than with it. Ledford’s defense is spectacular. When Salisbury sprinter Tyrone Johnson reeled in a touchdown pass with 44 seconds left it was the first touchdown scored against Ledford in six CCC ballgames.

“Our guys are going to be pretty upset about that one,” Adams said. “They hadn’t given up a touchdown in a long time.”

On the other hand, Ledford’s offense is n0-frills, workmanlike. Lots of downhill running. Passes are rare. It’s good strategy. The philosophy is simply to minimize mistakes and let the defense win the game.

“We play the clock game,” Adams said. “We have to make some first downs and keep our defense fresh. We did a good job tonight of winning time of possession, of controlling the ball.”

There was only one serious drive in the first half. That was Ledford’s second possession. Starting on their 38, the Panthers bulled forward 5, 6, 7 yards at a time, with Little carrying stacks of bodies. It was like watching a runaway freight train smash through a pile of logs on the track.

“They ran power and they ran counters and they got pretty physical with us,” Salisbury linebacker Blaine Shellhorn said. “We were in our base defense, for the most part, but we were trying to stack the right side. We got a lot of stops tonight, but on that second series, they just ran over us.”

The Hornets tried to make a stand with their backs to the goal, but on fourth-and-goal from the 3, Little crashed into the end zone. The Panthers gave it to Little again for a 2-point conversion, there was no stopping him, and it was 8-0.

“We have to keep Little fresh for defense, but there are situations on offense where we’ll use him,” Adams said. “That was one of those situations.”

Salisbury had just three first downs in the first half and completed only one pass, but that single completion — Mike McLean to Raheim Walker for 23 yards — was important. A few plays later, Walker took a pitch for 6 yards, a penalty was tacked on for a face mask grab, and the Hornets were suddenly on the Ledford 7 with first-and-goal. But two runs hit a brick wall, a third-down toss fell incomplete, and Jack Fisher was called on for a 23-yard field goal. He made it, and the Hornets trailed at the break, 8-3.

“We just missed opportunities that we can’t afford to miss in a game like this,” Hinson said. “Their defensive line was creating havoc, and we just weren’t running the ball as efficiently as we needed to.”

Neither defense would budge in a ferocious third quarter. Late in the quarter, Salisbury elected to play field position and punted on fourth-and-short. Fisher, who had helped Salisbury beat Ledford in soccer earlier in the evening, crushed the punt, and it soared almost 50 yards in the air. Reich, chasing after it like a center fielder, made the catch over his shoulder, wheeled and tore down the Ledford sideline, picking up blocks, and fighting his the way to the Salisbury 46.

“He brought it back to where we’d kicked it from,” Hinson said. “Great punt, and it turns into a huge play for them.”

Not long after that, Reich was streaking for another major gain on a jet sweep. That set up Alex Mendoza’s field goal as the fourth quarter got under way, and the Panthers led 11-3.

Ledford was determined to avoid putting the ball in the hands of Salisbury kick returners Johnson and Cameron Gill, but Patrick Taylor took a short kickoff after the field goal, broke out of a pack and hauled the ball to the Ledford 30.

McLean scrambled for 14 yards down the SHS sideline, his best run of the night, and Ledford was flagged for unsportsmanlike conduct to put the Hornets on the doorstep. A touchdown and a 2-point conversion would have deadlocked the game, but with the Hornets at the 1-foot line, they had that false-start penalty. Next came the wayward snap, and it was Ledford’s ball.

“I think that false start happened because we haven’t been able to practice since Wednesday,” Shellhorn said. “We hadn’t had the reps, and it’s unfortunate that it happened. That took something out of us, and when we went back out there on defense we weren’t quite the same.”

Ledford punched away, straight ahead, the clock ticking. The chains moved, and they moved again. Salisbury, which got a lot of terrific defensive plays from Shellhorn, Jalon Walker, Jabril Norman and Jadarius Wood, tried to make its stand at its 35-yard line. It was fourth-and-2 for Ledford with 4:40 remaining. Everyone in the stadium knew Little would get the ball on that critical snap, but he still broke through the left side. plowing for 12 yards to the SHS 23.

With just 1:23 remaining, Little charged into the end zone to complete the smash-mouth drive. The PAT put the Panthers ahead, 18-3.

Salisbury didn’t give up. McLean found Johnson streaking through space in the middle of the field, and the Rowan County dash champion won’t lose many footraces. Fisher’s PAT with 44 seconds remaining made it 18-10.

Salisbury’s onside kick attempt failed. Ledford took a knee, sighed with relief, and the cheers for the Hornets swelled louder than they had all night.

“We needed a game like this, we really did,” Adams said. “Those blowouts we’ve been having might be fun, but they’re not reality. Tonight, this was reality. We had to get key stops, we had to execute for key first downs, we had to face adversity and we had to send our hands team on the field for an onside kick.  Those are not things we’ve had to do in a long time, but I thought my guys responded really well to the challenge.”