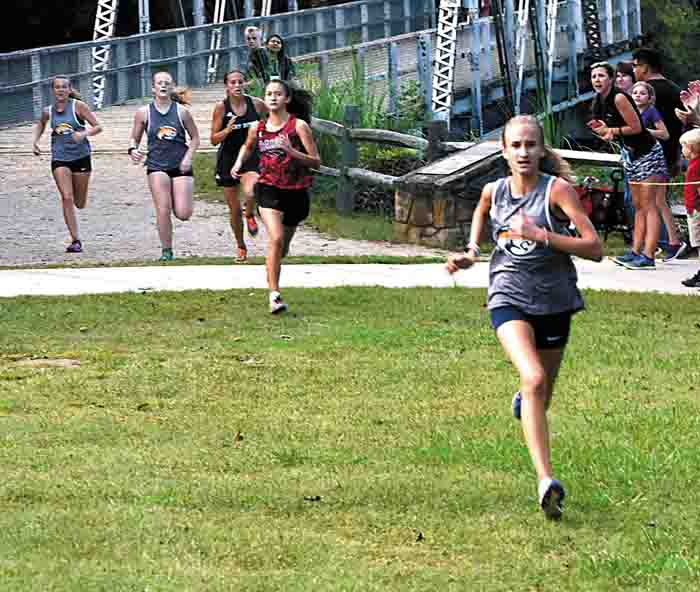 Carly Green from Carson in foreground, with Megan Deal and Lani Isley in the very back, with Megyn Spicer. File photo by Wayne Hinshaw, for the Salisbury Post

But then a small sea of gray jerseys appeared on the iconic bridge that signals the home stretch. Carson’s Carly Green, Lani Isley and Megan Deal were running together, stride for stride and almost side by side, and they were 11th, 12th and 13th. They put Carson’s girls over the top and the Cougars won the North Piedmont Conference cross country championship on Tuesday evening.

“Those three girls wanted to win very badly, and they stayed together in a pack all the way,” said junior Taylor Conrad, who paced Carson and Rowan runners with a fourth-place individual finish. “They’re the reason we won.”

Carson freshman Abby Lee, super early this season, remains sidelined with medical issues, but Conrad (21:35) vocally steered her teammates to victory. She was making her own comeback at Dan Nicholas Park after collapsing immediately after the Rowan County Championships from exhaustion and dehydration. She was thrilled to finish this race feeling fit and strong. Then she cheered on her teammates.

“Taylor Conrad has always been a great motivator and a great leader for this program,” Carson coach Les-Lee Ihme said. “She was always able to be that second runner for us when we had Taylor Wiggins and then when we had Abby Lee. So she was feeling a lot of pressure and was putting a lot on her shoulders at the county meet, knowing she had to be our lead runner. I told her today there was no pressure and not to worry about winning this race or finishing second. We just needed her to be somewhere in the top five, and her teammates would do the rest.”

“Our whole team was energized today,” Barrera said. “We’ve been through a lot this year, but we’ve stayed strong through all of it.”

The victory ended a string of near misses for Carson in conference championship meets. The Cougars have been contenders since 2014, but they finished second in South Piedmont Conference meets to Northwest Cabarrus in 2014 and 2015. Even with Wiggins and Conrad finishing 1-2 individually in 2016, the Cougars finished third as a team in the SPC behind Hickory Ridge and Northwest Cabarrus. Last fall, with Wiggins injured, Conrad led the Cougars to a second-place NPC finish behind South Iredell.

“We’ve been close so many times in the last five years, so it’s nice to win a conference championship,” Ihme said. “I’ve always thought it’s even harder to win the conference than to win the county.”

Ihme has built a deep program.  A lot of Cougars, including Barrera, Green and Deal starting running cross country mostly to hang out with their friends, just to be part of a team.

“I don’t know if they even dreamed about being in our top five when they were starting out, but they’ve put in so much work and they’ve improved their times tremendously,” Ihme said. “Those girls just keep running year-round — cross country, indoor track and outdoor track, and that’s what has gotten them to where they are now. Megan Deal has improved her cross country times by 10 minutes.”

The girl everyone was chasing was Strange, a junior who is so fast that she trains with North Iredell’s top two male runners.

She’s tiny at 95 pounds, but powerful. She’s actually gained 15 pounds with the aid of a nutritionist since last year.

“I’d run this course twice before, but it was very hot both times,” Strange said. “Today, it really felt good out there and I was able to run a good time.”

She’s run a PR of 18:23 on the fast McAlpine course in Charlotte and has broken 18 minutes in a 5K indoors.

“Now we can think about the regional and doing our best there,” Conrad said. “This gives us a lot of confidence.”