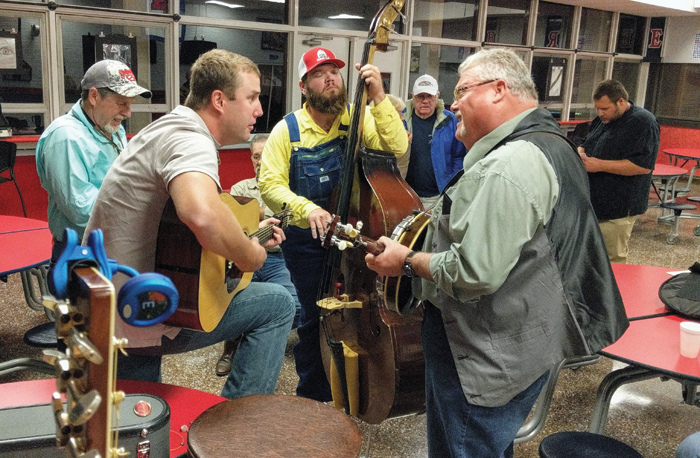 The drama started when the storm knocked out power for thousands of Duke Energy customers in Rowan County, including the site of the convention, East Rowan High School.

Using generator-powered lights, Granite Quarry Civitan Club members worked through Friday evening to prepare food and decorations. They continued working Saturday, with the hope that utility crews would be able to get the power back on at the high school by midmorning. Principal Tonya German worked out a backup plan to move the show to Carson High School if necessary.

Utility crews from Arc America Utilities that had been homeward bound to Indiana detoured back to North Carolina to repair power failures brought on by the remnants of Hurricane Michael. The crews worked on the lines leading to East Rowan High School and neighboring Duke Power customers.

The Civitan Club had a 5 p.m. Saturday deadline set by the school system. If power wasn’t restored by then, the Fiddlers Convention would have to be canceled.

A critical issue early on was the pre-sold barbecue plates. The club had sold more than 600 tickets for the meals. Another 100 plus plates were expected to be sold during the evening in addition to hamburgers and hot dogs.

Nazareth Child and Family Connection opened its kitchen to the club to allow to-go plates to be assembled there. The plates were packed in large coolers and taken to the school. Club members worked throughout the day to accommodate convention-goers and ticket holders as they began to arrive for the fundraiser.

The convention brought musicians and fans from all over North Carolina and South Carolina, east Kentucky, east Tennessee and Virginia. Musicians gathered in the school lobby and hallways. Jam sessions by musicians of all ages kept things lively throughout the afternoon and evening.

One Civitan member said the musicians seemed to be happy just gathering and playing tunes together. The jam in the lobby continued throughout the night with musicians filtering in and out.

With the 5 p.m. deadline nearing, the club had more than 60 entries registered for individual and band competition in youth and adult categories. With minutes to spare as the deadline approached, the lights came on, and the school erupted in cheers and clapping.

The competition began with a 90-minute delay in the start time. The youth competition ended with all performers back on stage for three rousing instrumentals followed by the announcement of the winners.

Adult individual and adult band competition followed. At a midway break in the adult competition, the Civitan Club honored Pammy Davis Lassiter for her dedication, preservation and promotion of bluegrass and traditional music.

Despite a loss in food sales and paid admission tickets, the Granite Quarry Civitan Club said it appreciates all who helped by giving their time and talents to the fundraiser.

Winners in the youth competition were:

• The Don and Margaret Livengood Award for the Most Outstanding Youth Performer was awarded to Jake Goforth.

• The Winner of the Ralph Pennington Memorial Master Fiddler Award was Carrie Webster.