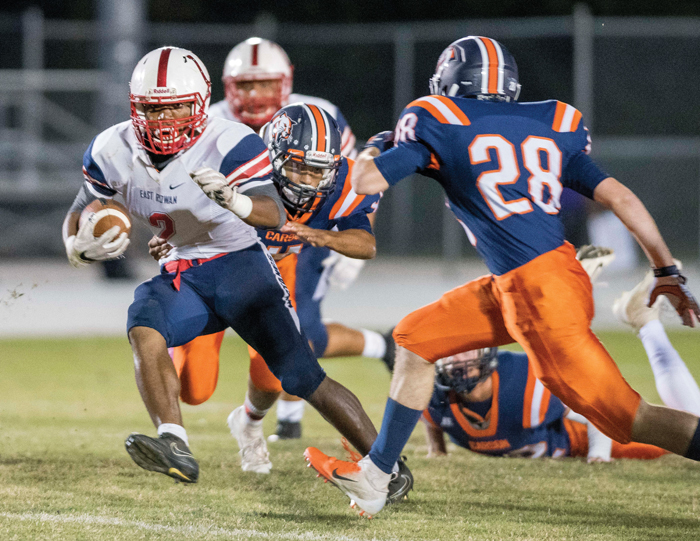 CHINA GROVE — All of a sudden, East Rowan’s cards may be worth keeping.

The Mustangs, winless since Aug. 31, broke a four-game losing streak and climbed back into the NPC race Monday night with an exciting 28-21 victory at Carson.

“We’ve worked really hard to put ourselves in a position to win at the end of a game like this,” winning coach John Fitz exhaled after East (4-4, 1-1) survived an edge-of-your-seat finish. “We finally pulled it off. It’s been a while since we won one, but this right here makes it all worth it.”

In a game that saw three lead changes, the outcome wasn’t sealed until East senior Gabe Hinceman batted down a fourth-and-goal pass by Carson quarterback Justin Smith on the night’s final play.

“This is really an opener for us,” said Hinceman, a 6-foot-3 safety and part of a defense that limited Carson (3-5, 1-1) to 110 yards and two first downs in the opening half. “We hadn’t beaten Carson in so long. We needed this one.”

It was East’s first win against Carson since 2012 and curbed a five-game skid against the Cougars. The Mustangs’ offensive line threw a block party — and the guest list included running backs Sam Pinckney and Sam Wall, quarterback Logan Forbis and Hinceman, a space-hunting receiver who caught three passes for 61 yards.

“You put in a lot of hard work on the offensive line,” senior center Hunter Eagle said. “But you do it because the team relies on you. When you have to drive 80 or 90 yards downfield to score the winning touchdown, that’s the reward.”

East used Forbis’ marksmanship, Pinckney’s elusive dances into the secondary and Wall’s power plunges through the trenches to build a 20-7 halftime lead. But second-half TDs by Carson’s Michael Gonsalves and quarterback Justin Smith pushed the hosts ahead 21-20 with 7:09 remaining.

“We may have been down, but we weren’t going to stop,” Forbis said after passing for 147 yards and a second-quarter touchdown. “We knew we had to get the ball in the end zone. We’re a team that wants to compete, that welcomes a challenge.”

“We couldn’t get the ball enough in the first half,” he said. “They kept it. They had some good, long drives and ate up the clock. We had that one long scoring play early (Hunter Courtney’s 64-yard touchdown romp), but from that point on we were unable to get first downs and had to put our defense back out there.”

Carson’s defense forced three turnovers but ceded 393 total yards. East’s game-winning drive began at its own 9-yard line with 2:48 to play. On first down, Forbis completed a 9-yard sideline pass to Wall. On second down, Pinckney (28 carries/149 yards/2 TDs) found a seam and busted a 14-yard run. A face-mask penalty against Carson — one of four 15-yard infractions called against the Cougars — advanced the 47.

“We were executing, getting everything right,” said Eagle, who joined forces with Josh Somoa, Dylan Courtney, Jacob Daubenmire and Dylan Goodnight on East’s beefy OL. “Once we set that tone, it was game-on.”

It was Wall (87 yards rushing/41 receiving) who made ripped off back-to-back runs to put East in scoring position. A Mustang purebred, the senior gained 28 yards on a pitchout and 20 on a handoff, advancing the ball to the Carson five. On first-and-goal, Christian Bennett burrowed into the end zone with 1:30 remaining.

“The running game really picked up in the second half,” said Forbis. “Those guys on the line, they weren’t going to lay down for anybody. They made all the blocks.”

It set the stage for Carson’s final rally — a near-miss of a drive that reached the Carson 3-yard line. Smith, who hadn’t completed a pass all night, hit three in succession — finding Courtney, Al Jackson and C.P. Pyle with accurate throws in the game’s final minute. But on second-and-goal, running back Jerry Cipres was dropped for a 3-yard loss by dirt-eating defender Bennett. On third down from the six, Smith’s pass into the end zone deflected off Cipres’ fingers and fell to the ground.

“Then on fourth-and-6,” Smith reported, “I knew the situation and needed to make a play.”

The final seven seconds ticked away as Smith was pressured out of the pocket, rolled out to his left and fired a pass intended for Gonsalves. It never got there.”

“I saw (Gonsalves) line up, bouncing on his feet, like he was waiting for something,” Hinceman concluded. “He popped off the line and Justin rolled out toward me. Knowing the situation, I just wanted to bat the pass down. I wasn’t going for a home run.”

And with it, he gave East something more important than a hard-fought conference win — hope.

“East Rowan is on an uphill climb — and that’s a good thing,” Eagle said afterward. “As a team, we’re almost there.”

NOTES: Courtney led Carson with 117 yards rushing. Gonsalves added 87. … Pinckney scored his fifth and sixth touchdowns in the first half. He enjoyed his fourth 100-yard game — and third in a row. … East hosts South Iredell on Friday while Carson travels to Statesville.