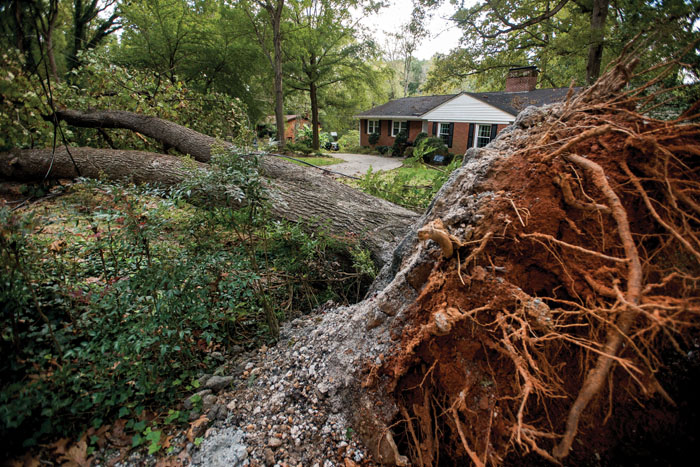 SALISBURY — Karen Carmichael had to get creative when leaving her West Colonial Drive home after a tree fell in her Milford Hills neighborhood. She couldn’t drive onto the street so she parked a few houses away and cut through her neighbor’s yard.

Two trees on her street tore down utility lines — one in front of a neighbor’s house in the 200 block and another at the end of the 100 block. The Carmichaels lost power about 2:30 p.m. Thursday as the remnants of Hurricane Michael passed through Rowan County.

“These are some really old trees,” she said, standing near limbs from a downed one.

She got a generator from her daughter-in-law’s father, who is an electrician. He had a large generator that he trucked in from Spring Road. The road dead-ends at Jake Alexander Boulevard across the street from the National Guard Armory.

Carmichael said the electrician drove his truck over the curb and toward her home on West Colonial Drive on Friday afternoon. He later bought another generator for a neighbor. The generator has been powering her whole house, but she did have to get rid of everything in the refrigerator.

The family grilled on Friday when the food began to thaw. On another night — Carmichael’s wedding anniversary — they went to a friend’s home for dinner.

“We have just been so fortunate. When you look at pictures of eastern North Carolina and the Florida Panhandle, we are just so fortunate to not be worse off,” Carmichael said.

She said all the talk from weather forecasters about the possible damage from Hurricane Florence and then not really being affected sort of made her family relax when it came to Hurricane Michael.

“We prepared for it,” she said of Hurricane Florence, “but thought (Hurricane Michael) would move past.”

She said the power failures and downed trees seemed bad but it is nothing compared to what others endured in Mexico Beach and other parts of Florida.

Her husband, who works at Lee Street theatre, wasn’t able to drive to work one day so he rode his bicycle.

About 10 utility trucks lined different sections of West Colonial Drive to restore power. Many of the crews came from York County and Fort Mill in South Carolina.

Early Monday, there were 76 residents still without power in the Milford Hills neighborhood.

According to Duke Energy spokeswoman Meghan Miles, crews have restored power to more than 1 million customers since the storm.

Miles said at the peak, 554,000 customers were without power.

Crews who worked throughout the Carolinas started with transmission equipment, Miles said, because that ultimately serves the local lines that you see along neighborhood streets.

About 10,000 crews were brought into the Carolinas from utility companies as far away as Texas, Indiana, New York, Ohio and other states to help restore power through a mutual-aid agreement with Duke Energy.

Luther Cranfield and his sister, Mildred Burkhart, were “luckier” than most of their neighbors. The siblings, who live on Milford Drive, already had a generator. Cranfield requires round-the-clock oxygen, and they bought the generator “just in case” some time ago, Burkhart said.

The two lost power Thursday and hooked up the generator, mostly to power Cranfield’s oxygen tank. They also powered two lamps and a television, but the generator didn’t help them save their food.

“We lost everything in the refrigerator,” Cranfield said.

The siblings were without power to the fridge for the first two days. The cause of the downed power lines was a tree that was ripped from its roots on West Colonial, around the corner.

“It’s out on both sides,” Burkhart said, pointing up and down her street.

She spent early Monday afternoon raking leaves while her brother sat on the porch.

Cranfield said the generator lasts only about eight hours before it would need to be refueled. They went to the store Monday morning to buy fuel.

The two said they have been eating out since Thursday, mostly breakfast and dinner with sandwiches in between.

“We can’t cook nothing,” Burkhart said.

She said if they didn’t have a generator, her brother would have had to go to the hospital.

Cranfield has lived in his home for 42 years. When his wife died about 10 years ago, Burkhart moved in to help take care of him. He’s had power outages during storms but estimates this is the longest he’s been without electricity.

Some customers are signed up for Medical Alert, a Duke Energy program for customers with special needs.

“The program does not mean electric service won’t be interrupted or they will be first to be restored, but we notified these customers in advance of the storm so they could make special preparations in case they experience an extended power outage,” Miles said.

Customers who have no power can call 1-800-Power-On or register to receive notifications by text message by texting REG to 57801. Residents who register can text the word OUT to 57801 to receive updates on power restoration.

Miles said Duke Energy is especially grateful to customers for their patience after enduring two major storms in the last month.