Ruth Bader Ginsburg can learn something from Brett Kavanaugh 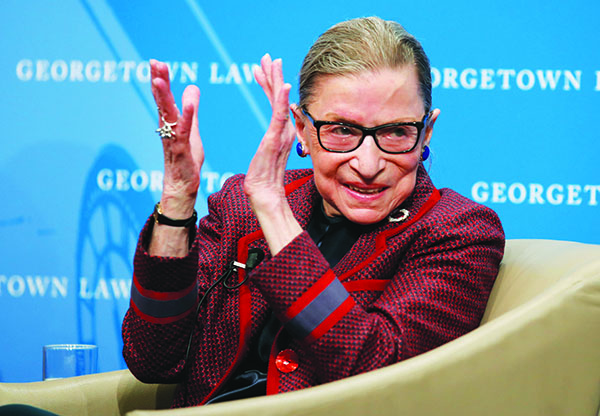 Supreme Court Justice Ruth Bader Ginsburg applauds after a performance in her honor after she spoke about her life and work during a discussion at Georgetown Law School in Washington on Friday, April 6, 2018. (AP Photo/Alex Brandon)

What does Justice Brett Kavanaugh, the newly confirmed originalist on the Supreme Court, have in common with Justice Ruth Bader Ginsburg, the iconic feminist? Each has a troubling inconsistency between his or her words and deeds when it comes to race.

He’s the conservative who survived a bruising confirmation process despite sexual assault allegations against him to cement the court’s turn to the right; she’s the judicial face of resistance. But there’s at least one area in which they both starkly depart from their jurisprudence: how they hire law clerks. Kavanaugh’s legal views on affirmative action don’t reflect his diverse hiring practices, and Ginsburg’s progressive jurisprudence on racial justice doesn’t show up in her own chambers.

Supreme Court clerks have substantial duties, including researching legal precedent, preparing for oral argument and even writing first drafts of opinions. After their one-year terms, the clerks are pursued for law school professorships and wooed by law firms who offer signing bonuses as high as $350,000. And so in making their hiring decisions, Kavanaugh and Ginsburg signal how they mold the most elite cadre of young lawyers in the United States.

Kavanaugh has engaged in one of the most diverse hiring practices of any federal appellate judge. Of his 48 law clerks, a little more than 25 percent have been nonwhite. And as a justice, he has already hired one African-American clerk. She is one of only three blacks clerking on the Supreme Court this year – two of whom previously clerked for Kavanaugh on the Court of Appeals.

Explaining his selection of law clerks whom other judges overlook, Kavanaugh said: “What it takes is not accepting the same old answer, oh, there’s a disparity. Well, why and then do something about it.” As part of that effort, Kavanaugh frequently speaks to black law student organizations to encourage clerkship applications.

Ginsburg, on the other hand, has hired only one African-American law clerk in her 25 years on the Supreme Court. This is an improvement from her 13-year tenure on the U.S. Court of Appeals for the District of Columbia Circuit, when Ginsburg never had any black clerks. When this issue was raised during her Supreme Court confirmation hearings in 1993, Ginsburg said: “If you confirm me for this job, my attractiveness to black candidates is going to improve.” This remains a promise unfulfilled.

Accounting the hiring of all racial minorities since 2005 – including Asian Americans, Native Americans and Latinos – only 12 percent of Ginsburg clerks were nonwhite. That ranks her much closer to the conservative justices than the progressives with whom she frequently sides with in cases.

This stands in stark contrast to the records for both Ginsburg and Kavanaugh. Ginsburg has been a certain vote to uphold affirmative action programs and other efforts to remedy the effects of race discrimination. When Ginsburg was sworn in to the Supreme Court, she said: “A system of justice will be the richer for diversity of background and experience. It will be poorer, in terms of appreciating what is at stake and the impact of its judgments, if all of its members are cast from the same mold.”

Kavanaugh, however, has opposed “special legislation” to remedy racial disparities and stated in 1999 that he expects the Supreme Court to someday say that “we are all one race in the eyes of government.” As a staffer at the George W. Bush White House, he helped craft the administration’s opposition to the University of Michigan affirmative action plan.

Let me caution against any false equivalence. Ginsburg has done and will continue to do more to bring about equal justice under the law than Kavanaugh. If Kavanaugh votes the way most legal observers expect, affirmative action will effectively end and the Voting Rights Act, widely recognized as the most successful civil rights bill ever, will be further gutted.

Ginsburg will forcefully push back against this retrenchment on racial justice, so in terms of who is the better judge for African-Americans, there is no contest; the high-five goes to the notorious RBG.

But Ginsburg represents a familiar person to people of color: someone who espouses a progressive politics committed to racial justice, but whose old-boy-and-girl networks are as segregated as a senior staff meeting of the Trump administration.

So which white allies can African-Americans really count on? I’m not sure it’s either Ginsburg or Kavanaugh. For both, on some level, African-Americans are expendable. This is one of the tragic themes of U.S. history, and, as Justice Kavanaugh takes the bench, this theme will be reflected in two places: in the civil rights decisions of the new conservative majority and in Ginsburg’s law clerk offices.

If there is limited cause for hope, it’s that lifetime tenure provides federal judges with an opportunity to evolve. I hope Kavanaugh learns, from all those minority clerks he hired, the value of affirmative action. And I hope Ginsburg serves for 10 more years, and that each of those years she hires clerks of color to remedy a substantial blemish on an otherwise remarkable career.

Butler is the Albert Brick professor in law at Georgetown University Law Center.