Production of ‘Charlotte’s Web’ brings arts and ag together 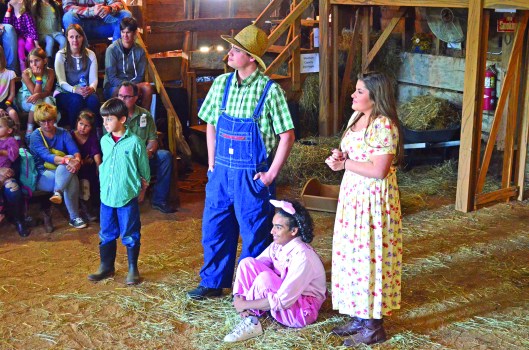 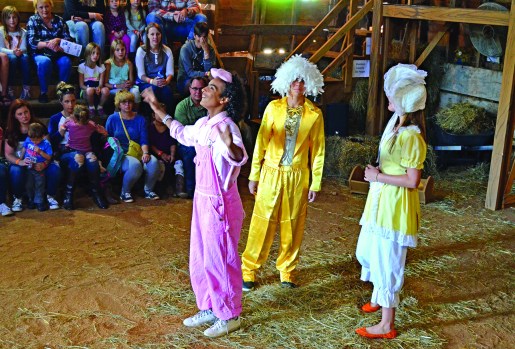 Len Clark/For the Salisbury Post Ali Khatib as Wilbur and Ally Cross and Cooper Fleeman as Goose and Gander in 'Charlotte's Web.' 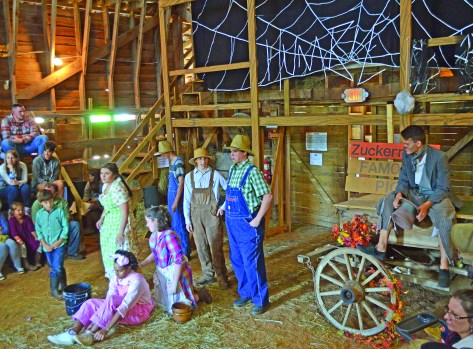 Len Clark/For the Salisbury Post The cast of 'Charlotte's Web' at Patterson Farm. 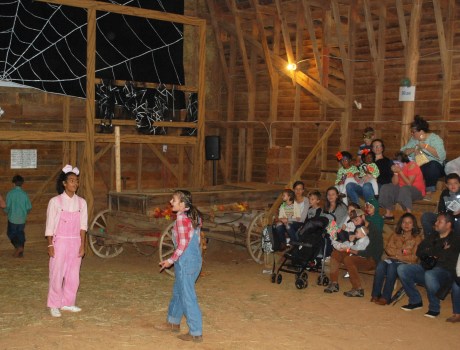 Wilbur, played by Ali Khatib, and Fern, played by Maggie Cross, speak to each other in the production of Charlotte's Web at Patterson Farm on Oct. 14.

MOUNT ULLA — The theater went to the farm for a production of “Charlotte’s Web” at Patterson Farm over the weekend.

In a barn, the Piedmont Players cast performed four shows of “Charlotte’s Web,” which the theater had staged three years ago at Norvell Theater in Salisbury. Director Reid Leonard contacted the cast members for a return engagement.

“Most of the cast were still in the area — one way or another,” Leonard said. “They guy who plays Zuckerman is a sophomore at Catawba, but he’s in the area. As much as the original group got back together as possible.”

Ali Khatib, who played Wilbur, said it was great to be on stage with his castmates again.

“It’s very nostalgic,” Khatib said. “You have all the same people back as well.”

Coming from a stage to the barn where the audience was on three sides was an adjustment, but several actors agreed it was great to be able to interact more with the audience.

“It’s a completely different experience in this setting,” Khatib said. “It’s usually very one-sided in a sense, where we’re just talking to the audience, whereas now we’re interacting with them.”

Audience members could hear the sounds of the farm as they watched “Charlotte’s Web.”

“It’s a fun experience to be able to come out to a live setting where it would typically happen and do a play,” said Hayden Palmer, who played Templeton. “It makes it more realistic for the audience.”

Leonard said this was the first play the Piedmont Players has done at Patterson Farm. The Rowan County Tourism Development Authority approached him about staging a production that incorporated both arts and agriculture.

“The tourism folks called about two years ago. So they had done the branding of Rowan County, and it was arts and agriculture,” Leonard said. “They wanted to figure out how to combine the two. ‘Could we do a pumpkin play?’ I went, ‘I don’t know a pumpkin play.’ Everyone likes pumpkin, Charlie Brown, but there’s not a play. Then all ofa sudden we realized, wait a minute, we’ve got ‘Charlotte’s Web.’ We could put it back together. It’s turned out to be fun.”

Palmer said it has been great getting the cast back together, since he hadn’t seen some of the actors since the last “Charlotte’s Web.”

“The bonds that you make in these shows are really incredible,” Palmer said.

Piedmont Players will next present “Magic Treehouse: Pirates Past Noon” on Nov. 9-10 and Nov. 16-17.