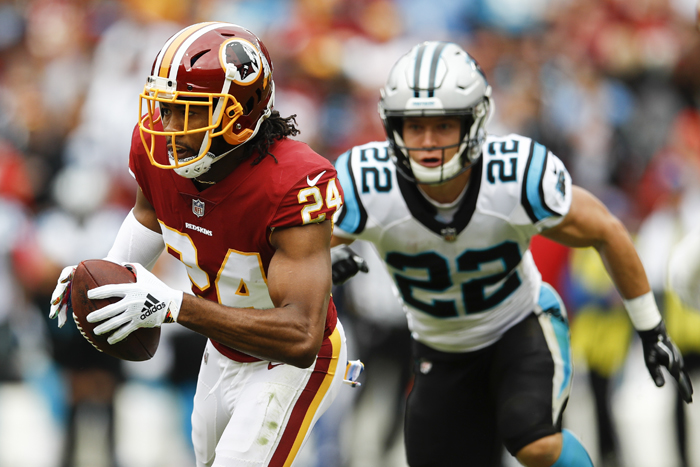 Washington Redskins cornerback Josh Norman (24) carries the ball after pulling in an interception as Carolina Panthers running back Christian McCaffrey (22) pursues him during the first half of an NFL football game, Sunday, Oct. 14, 2018, in Landover, Md. (AP Photo/Patrick Semansky)

LANDOVER, Md. (AP) — Following his prime-time benching and criticism from a former teammate, Josh Norman wanted to shut off his phone because the noise was getting so loud.
Then, he silenced it all.
Norman bounced back from one of the worst games of his career by intercepting Cam Newton and forcing a fumble in the Washington Redskins’ 23-17 victory over the Carolina Panthers on Sunday.
Longtime Redskins safety DeAngelo Hall said Norman had gone “Hollywood,” speculation swirled about his value to the Redskins and the flashy cornerback was on the defensive even when he wasn’t on the field.
“It was like I was playing cornerback against everybody,” said Norman, who had two game-altering plays and four tackles to put an embarrassing showing at New Orleans behind him. “I played within the defense and played within myself.”
Defensive teammates mobbed Norman after each of his forced turnovers. After a defensive unit dinner earlier in the week, Norman led the way for a group that made a crucial stop at its 16-yard line to hold on for the victory.
“He came out and performed as he should,” safety D.J. Swearinger said. “We needed that from him. He needed that for himself. And we needed to see that as a group.”
Norman ended his 19-game interception drought by catching a jump ball thrown by Newton on a third-and-long play early in the second quarter, his first pick since Dec. 24, 2016. Norman also popped the ball out of Panthers rookie receiver D.J. Moore’s hands in a showcase performance against the team that abruptly cut ties with him after his All-Pro 2015 season.
“It’s fitting that we break that little streak against them,” a smiling Norman said. “I guess we got a flair for the dramatic somehow.”
Newton threw for 275 yards and two touchdowns on 27 of 40 passing and rushed for 43 yards in a turnover-marred loss. He engineered a late drive that got the Panthers into the red zone before stalling out.
Carolina (3-2) was long before that doomed by turnovers, including Moore’s on a punt return that set up Alex Smith’s 22-yard TD pass to Vernon Davis.
“We kind of dug ourselves in a hole early,” Newton said. “We still found a way to put ourselves in a winning position, but we didn’t. We’ll get better from it.”
Adrian Peterson rushed for 97 yards on 17 carries and Smith connected on touchdown passes to Davis and Paul Richardson for the Redskins (3-2), who looked like an entirely different team than the one that got stomped 43-19 by New Orleans on Monday night — when coach Jay Gruden benched Norman in the second half.

BIG-GUY CATCHES
Offensive linemen saved their quarterbacks with some heads-up, sure-handed plays.
When the ball popped out of Newton’s hands late in the first quarter, Panthers left guard Greg Van Roten caught it and made up some ground — but got only a 7-yard loss as credit for his efforts.
Redskins left tackle Trent Williams caught the ball when Smith fumbled early in the fourth and rushed for 8 yards to help set up a field goal by Dustin Hopkins.
“When I caught it, I just tried to go north and get a couple yards,” Williams said. “Definitely didn’t want to fumble it.”

KICK OUT OF IT
After hitting a 63-yard winner last week, Carolina’s Graham Gano missed his first kick of any kind this season when he was wide left on the extra-point attempt following Newton’s TD pass to Devin Funchess. Gano, who played for the Redskins from 2009-11, entered 7 of 7 on field goals and 11 of 11 on extra points.
Hopkins connected on a 56-yard field goal that made it 20-6, the longest of his NFL career.

INJURIES
Panthers: DT Kyle Love was slow to get up after being injured midway through the fourth quarter. … TE Greg Olsen returned after missing three games with a broken right foot. … WR Damiere Byrd was out with an ankle injury, forcing Moore into return duties.
Redskins: RG Brandon Scherff tweaked his knee on a fourth-down play in the third quarter, but returned on the next drive. … RB Chris Thompson missed the game with rib and knee injuries, while WR Jamison Crowder sat out with an ankle injury.