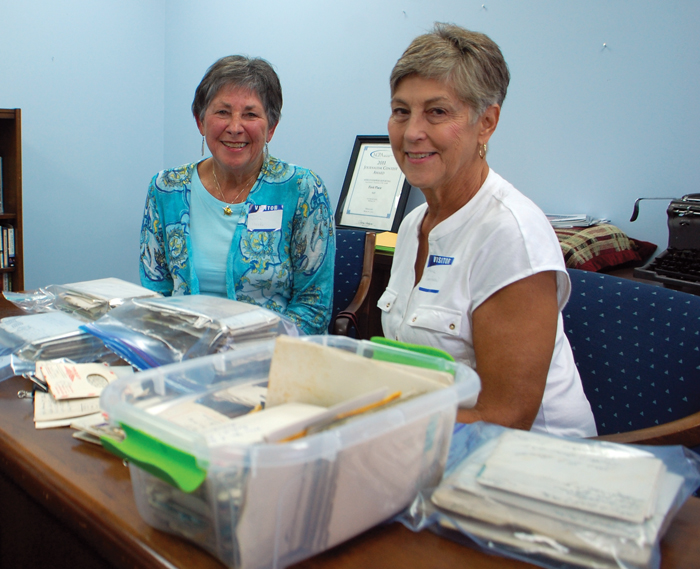 Photo by Mark Wineka/Salisbury Post Julia Meeks, left, and Anne Goodman sit among some of the letters their fathers and uncles sent home from World War II. Six brothers from Woodleaf, including their dads, were serving in the war at the same time.

WOODLEAF — The Bost brothers’ letters — now up to 75 years old — are a sentimental treasure to cousins Anne Goodman and Julia Meeks.

There are hundreds, and they have yet to read all of them. But when they do pause to look through these handwritten letters, tears often fill their eyes.

“Our dads did not talk about any of this,” Meeks says.

It’s not that the letters recount horrific World War II battle scenes or describe lonely nights in foxholes under a barrage of fire. The contents are more mundane than that, yet revealing to the women nonetheless.

They offer a glimpse into a different era and a family who sacrificed greatly during the war. Martin Luther Bost and his wife, Mary, saw six of their seven sons leave their Woodleaf farm to go to war.

Each of the boys wrote letters home, mainly to their mother, and it is these letters Goodman, Meeks and Julia’s sister, Freda, found in 2008 while cleaning out the old Bost farmhouse on Parks Road.

“They were homesick, definitely,” Goodman says of the overriding sentiment in the letters. “… These guys had never left the farm.”

All of the Bost brothers would return from the war alive, except James, who was killed in France on Aug. 27, 1944. He was in a tank that was blown up by enemy fire.

The other brothers were Fred (Julia’s dad); Jason; John and James (twins); Hobert; and Robert (Anne’s dad). Fred, James and Hobert served in the Army; John, the Navy; and Jason and Robert, the Army Air Corps.

A seventh brother, Richard, was able to stay home on the farm. The boys also had three sisters.

Anne, Julia and Freda opened a bedroom trunk and discovered the letters — the first time they had set eyes on them. Their Uncle Richard was the last Bost to live in the house before he went to a nursing home.

Anne, who lives in Salisbury, became executor after Richard’s death, and the cousins were clearing out the old farmhouse so the property could be sold.

The letters the brothers sent home generally asked a lot of questions. Had they heard from the other boys? How is the farm doing? What’s going on at church? How is Richard getting along, and how is everyone’s health?

The Bosts lived on a farm that raised mostly cotton. The boys also asked about the wheat and oats and whether peaches and grapes were still in season. They often mentioned how they missed attending Unity Presbyterian Church with the family.

Goodman and Meeks say the brothers were close. Besides writing their mother, they also wrote letters to each other. Several of the brothers already were married, so they were writing to wives, too.

Back when they all lived in the one-story, three-bedroom farmhouse, the seven boys slept in one room with wall-to-wall beds. And when they started going to school, they walked to a one-room schoolhouse.

They had a reputation for sticking together even then. “You did not mess with them,” Meeks says.

Their home had no indoor plumbing or electricity, even into the 1950s. The water came from a well, and Mary, who stood only about 5 feet tall, headed up all the cooking and washing.

In taking care of her large family, Mary slept in shifts, often getting up at midnight to mend clothes for a couple of hours before going back to bed.

She loaded the boys — and sometimes their wives — with fried chicken, rabbit and squirrel when they left home on trains, bound for some faraway military outpost.

One of the boys’ letters back home said, “The rabbit was good on the train. I think it was better than the chicken.”

Mary kept sending them food she had canned — even squirrel and sausage — when they were away. In one of his letters, John complained that vinegar in one of Mary’s pickle jars had spilled through his package and ruined the new underwear she also sent him.

Because he wasn’t married yet, Hobert seemed to write home most often. One of his letters wondered if the folks back home could sell his car.

The boys were constantly sending money home, or Mary was sending money to them. One of Jason’s letters thanked Mary for sending him and his wife, Margaret, $3 to buy groceries at Christmas.

Fred wrote home that he would die for one of Mary’s fruitcakes over the holidays.

John, who was more religiously inclined, stamped a scripture reading to the backs of his envelopes. Goodman says her dad, Robert, wrote that he sometimes thought about going AWOL, if it meant he could be home again.

One of his letters wished for the end of war and times when men could live like men again.

In a letter written from somewhere in the Pacific on July 30, 1944, Fred ended by saying, “Good luck to you all. May God bless you and keep you till we meet again.

“Chin up, Mama. What a happy day it will be when all of us boys come home again and can live in peace. Your loving son, Fred.”

In less than a month, James would be dead, however. An Army private, he had been sent overseas on June 6, 1944 (D-Day) and was stationed briefly in England before shipping to France.

His last letter home was dated Aug. 9, 1944. It mentioned that he had recently received a letter from Robert and wondered if his folks had heard from Fred.

James said he wanted to write all his brothers as soon as he could.

At first, James was listed missing in action, and the brothers’ letters home tried to reassure Mary. Robert wrote his mother in September 1944, “I feel as you do he’s still alive somewhere or the other.”

Several of the boys found out much later than their parents at home knew that James had been killed.

His remains were interred initially in France but later shipped home to be buried at Unity Presbyterian Church. His memorial service in Woodleaf wasn’t held until August 1945, almost a year after his death.

He left behind a young wife, Margaret, and a 2-year-old son, James Jr.

Julia Meeks was a war baby herself.

Her mother, Almeda, was pregnant with her when Fred Bost shipped out for the Pacific islands from the West Coast. Almeda took the long train ride from California to North Carolina by herself, standing much of the way because of how crowded the cars were.

Julia was 10 months old before her father first laid eyes on her. She says Fred brought home a magnificent Japanese sword from the war — something she still has — but again it wasn’t something he talked about.

She has no idea how he came to possess it.

Anne laughs, remembering how her father, when he returned from the war, would not allow his family to listen to Frank Sinatra records. He thought Sinatra had used his celebrity to avoid the war.

“My dad really had a thing against Frank Sinatra,” she says.

Anne reads from an Aug. 15, 1945, letter Jason Bost wrote when it was clear the fighting was done.

“Well, I guess you are just as happy as we are to hear that the war is over,” Jason wrote from an Army Air Forces base in Colorado. “It sure came a lot quicker than we all thought it would. The people around here have just about gone wild with their celebrations. I am just thankful that it is over.”

Most of the Bost brothers returned to Rowan County to live, work and raise families after the war. John had met a girl from New Jersey and moved there. All the brothers and their wives have died.

Almeda Bost (Fred’s wife and Julia’s mom) was the last surviving spouse. She passed away two years ago, and Julia said Almeda never wanted to see the letters Fred wrote home, saying, “I lived it. I don’t need to read that.”

The letters hold another bittersweet memory for Julia, who now lives in Simpsonville, South Carolina. Her sister, Freda, died of cancer just two years after they first found the letters.

Goodman still brings flowers to the Bost headstones at the Unity Presbyterian Church cemetery in Woodleaf. Her parents are buried there, along with her grandparents Martin and Mary Bost and all six of her Bost uncles, except Jason, who is interred at Rowan Memorial Park.

Not too far from the Bost graves, Unity Presbyterian Church also has a handsome war memorial dedicated to church members who fought in all the country’s conflicts back to the Civil War.

Under the World War II heading are the names of those Bost brothers who are buried in the cemetery.

Goodman remains in awe of the courage and sacrifice young men made for their country, including her dad and uncles.

“It was just so sad how hard these people had it,” she says. “But they really didn’t complain.”