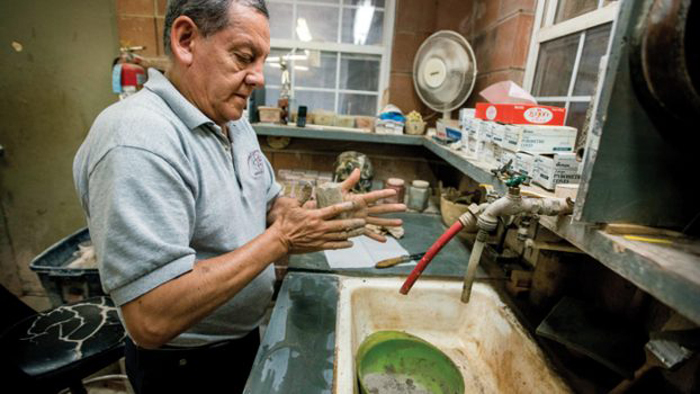 Fernando Gallardo, who works in the lab at Taylor Clay Products, has been with the company 27 years. Jon C. Lakey/Salisbury Post

1. The N.C. Department of Transportation approved $1 million for Mid-Carolina Regional Airport. What will those state and federal funds be used for?
A. Building a new terminal
B. Building two hangars
C. Resurfacing the taxiway
D. Installing fencing around the airport perimeter

2. Saturday’s West Fest at Cleveland Town Hall celebrated what?
A. West Rowan Elementary School, whose construction is nearing completion
B. The new home of the Cleveland Lions Club
C. The launch of a fundraising campaign for restoration of R.A. Clement School
D. Rowan Public Library’s plans for a new West Rowan Branch Library, to be located at Cleveland Elementary School

3. Ryan Turney, a Carson High School graduate and senior at the University of North Carolina at Wilmington, was studying abroad in Bangkok, Thailand, this fall when he died unexpectedly. What caused Ryan’s death?
A. Methanol poisoning
B. A spider bite
C. Malaria
D. Mercury poisoning

4. At a luncheon Wednesday, Meals on Wheels of Rowan honored some of its longtime volunteers, including some who have lived a long time. How many volunteers in their 90s are still delivering lunches?
A. Two
B. Four
C. 10
D. 12

5. Fernando Gallardo, who has worked for Taylor Clay Products for 27 years, came to the United States in 1989 and has been in Salisbury since 1990. Gallardo is a native of what country?
A. Guatemala
B. Venezuela
C. Peru
D. Chile

6. Jack Neubacher, who died at his home last Sunday, is remembered fondly by many as a charter member and longtime leader of what Rowan County organization?
A. Rowan Museum
B. Millbridge Ruritans
C. Salisbury Symphony
D. Experimental Aircraft Association chapter

7. The Rowan County Board of Commissioners waived solid-waste fees this weekend for what reason?
A. The annual “Fee-Free Day” in Rowan
B. To support Saturday’s High Rock Lake Clean Sweep
C. To encourage a fall cleanup throughout the county
D. To support Adopt-a-Highway teams who cleaned up litter on their designated streets Saturday

8. The Spencer Board of Aldermen has recessed until Nov. 13 a public hearing on a points-based ordinance designed to do what?
A. Have owners take better responsibility of their dogs
B. Hold landlords accountable for difficult tenants
C. Allow bigger fines for residents who regularly have on-street parking violations
D. Cut down on the times the town has to cut grass on overgrown lots

9. Carson and West Rowan high schools squared off against each other this past Tuesday in a league showdown for first place in what sport?
A. Women’s volleyball
B. Men’s soccer
C. Women’s cross country
D. Women’s tennis

10. Terry Oglethorpe and his wife, Mary, delivered something to Powles Staton Funeral Home Tuesday that the N.C. National Guard’s Family Readiness Program will distribute this Christmas. What did the Oglethorpes deliver?
A. U.S. flags
B. Diapers
C. Handmade toys
D. Cellphone cases