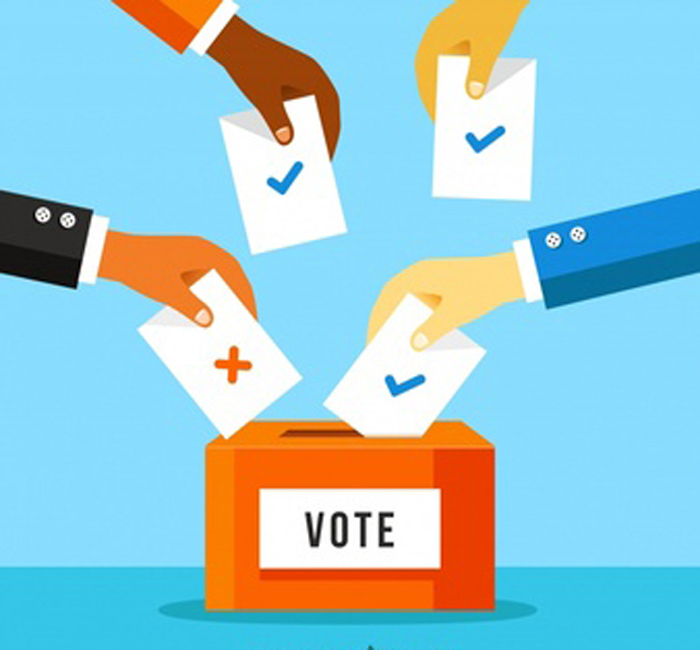 The Republican-dominated legislature put six proposed amendments to the state constitution on the ballot for voters to decide this November.

The Democrats’ response? “Nix all six.”

The amendments include the potential return of a voter ID requirement; provisions on victims’ rights and hunting and fishing regulations; a reduced cap on state income taxes; and changes to the state elections board and how judicial vacancies are filled.

Proponents of the amendments say they would protect and strengthen the rights of North Carolinians, some removing unnecessary partisanship. Opponents fault the amendments for the lack of a plan for how they’d be implemented, calling them a ploy to draw conservatives to the polls and protect the Republicans’ veto-proof legislative majority.

The two proposed amendments that have been most contentious pertain to judicial vacancies and the Board of Elections.

Called “Bipartisan Ethics and Elections Enforcement” and “Judicial Vacancy Sunshine,” the amendments have the potential to future limit the governor’s power. Each moves appointment authority from the governor and into the hands of the legislature.

Gov. Roy Cooper has repeatedly filed lawsuits against the legislature about the proposed changes, seeking to remove both from the November ballot because of what he says is misleading language.

The amendments — and arguments both for and against them – are as follows:

• Ballot text: “Constitutional amendment to establish an eight-member Bipartisan Board of Ethics and Elections Enforcement in the Constitution to administer ethics and elections law.”

• What it does: Currently, the nine-member Board of Elections and Ethics Enforcement is made up of four people from the governor’s party, four from the other major party and one who is a member of neither party. This new composition came in 2016, when legislators merged the elections board and ethics commission and increased the number of seats from five to eight.

The ninth “neither party” member was added after Cooper filed suit against the amendment.

If passed, the amendment would limit the board to eight members, with four selected by each major party in the General Assembly. Legislative leaders of the House and Senate, rather than the governor, would select board members, sending recommendations to the governor for final approval.

• What supporters say: On its website, the North Carolina Republican Party praises the provision that no more than four members of the board could be registered with the same political party. That would ensure that the board would “not (be) encumbered by partisan politics,” the website says.

“A bipartisan Board of Elections would be better, in my opinion, than one that decides issues on a partisan basis, as has occurred recently,” he said.

• What opponents say: Geoffrey Hoy, chairman of the Rowan County Democratic Party, said having a board with equal members would be a set-up for a standoff. Choosing members evenly from both sides, Hoy said, would almost guarantee a gridlock.

“The current board works perfectly fine, and that was a compromise,” he said.

Hoy faults this and the other proposed amendments for a lack of enabling legislation:

“It’s like writing a blank check,” he said, adding that would be unwise no matter which political power is in power.

• Ballot text: “Constitutional amendment to change the process for filling judicial vacancies that occur between judicial elections from a process in which the governor has sole appointment power to a process in which the people of the state nominate individuals to fill vacancies by way of a commission comprised of appointees made by the judicial, executive and legislative branches charged with making recommendations to the legislature as to which nominees are deemed qualified; then the segislature will recommend at least two nominees to the governor via legislative action not subject to gubernatorial veto; and the governor will appoint judges from among these nominees.”

• What it does: Currently, the offices of justice or judge are filled by appointment of the governor, other than District Court judge. Appointees hold their positions until the next general election more than 60 days after the vacancy occurs.

However, if a term expires on the first day of January after the next general election, the appointee fills the vacancy only for the unexpired term.

The amendment would create a “Nonpartisan Judicial Merit Commission” of no more than nine members appointed by the chief justice of the state Supreme Court, the governor and the General Assembly. The commission would evaluate nominees to fill vacancies “without regard to the nominee’s partisan affiliation.”

Nominees’  names would be forwarded to the legislature before reaching the governor, who would have 10 days to make a selection.

The amendment would allow the chief justice to make appointments if the General Assembly is not in session, if it fails to pick a nominee from the commission’s recommendation, or if the governor fails to appoint a recommended nominee.

District attorney vacancies would be filled by the governor, with appointees serving until the next legislative election more than 60 days after the vacancy occurs.

Don Vick, chairman of the Rowan County Republican Party, said the concept of a merit commission is better than having just one person decide on appointees.

“If, in fact, it’s truly made up of people who are impartial, I think it’s a great idea,” Vick said. “… I don’t care if it’s a Republican or a Democrat in power, they’re going to always lean toward their party.”

He said the government needs a system of checks and balances.

• What opponents say: One problem with the proposed amendment, Vick said, is that it is “virtually impossible to have someone who’s impartial one way or the other.”

He likened it to empaneling a jury, where choices are always swayed by attorneys’ desires to have people who will treat their clients fairly.

Hoy said the amendment would be a continuation of judiciary changes made by the current Republican supermajority that has “upset lawyers, upset judges and just made the whole legal process more uncertain.”

“The judicial system and the election of judges always has the risk of becoming too partisan,” Hoy said, referring to recent changes that added party affiliation to ballots in judicial races. “What they have done is guarantee that it will be too partisan.”