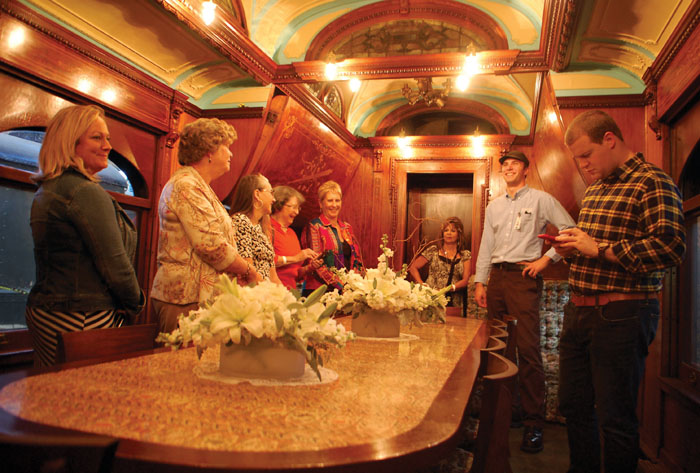 Mark Wineka/Salisbury Post Tour guide Tyler Trahan, second from right, describes some of the details inside the Loretto rail car's dining room, as part of a field trip for those who attended an OctoberTour luncheon Friday.

SPENCER — With the Doris’ many fine appointments, it’s difficult to sell the 1917 railcar short.

“This is a Cadillac,” tour guide Jim Morrison said of the Doris on Friday. “That’s a Rolls.”

With those words still hanging in the air, Morrison nodded toward the Loretto railcar parked beside it. Indeed, as nice as the Doris is, the Loretto’s luxuriousness can hardly be overstated.

And it’s the kind of private railcar you might expect for the president of U.S. Steel Corp., Charles Schwab (not the investment company Schwab).

Tours of the Doris and Loretto railcars at the N.C. Transportation Museum in Spencer served as extra dessert for people attending Friday’s OctoberTour luncheon at Salisbury Station.

Gary Freeze, well-known history professor at Catawba College, was the luncheon speaker, and his topic neatly meshed with the field trip his audience was later invited to take to the Transportation Museum.

Freeze titled his talk “Towns, Trains and Transition” and described the indelible mark left on Salisbury and Spencer by the Industrial Age and the railroad. It was a particularly fitting message given that many of the sites on this weekend’s OctoberTour were in Spencer, which was born as a railroad town.

Freeze credited John Henderson for persuading Southern Railroad to locate its major repair facility just north of Salisbury because it was the midway point between Washington, D.C., and Atlanta.

Spencer Shops, which is today the site of the Transportation Museum, became Rowan County’s largest employer for roughly half a century, and Spencer grew from it. The town owes its name to the Southern Railroad president at the time.

Freeze described how Salisbury and Rowan County made the transition from an agrarian economy to a more industrial one that would last almost a century.

From the time people began settling in Rowan County and Salisbury, they were mainly trying to take advantage of the rich soil, market their crops and worship in their faith.

Many immigrants found they could thrive in the back country, and it perpetuated a rich mosaic of communities, which eventually created a grain-based economy. But the intense farming of the land led to erosion of the rich black soil, Freeze said, and by 1835 people were fleeing an economically depressed Rowan County.

Grand ideas for canals on the Yadkin River did not work, Freeze said, because the Yadkin had two problems: It was full of rocks, and all the runoff from farming had filled it with silt.

In 1839, the decision was made to build identical cotton mills in Lexington, Salisbury and Concord. Salisbury’s would become the site of the Confederate Prison during the Civil War.

But Rowan’s initial foray into the cotton industry was struggling by 1850, and Salisbury soon tied its economic fortunes to the railroad. The town particularly benefited from having tracks, each with the same gauge or width, going in both north-south and westerly directions.

The railroad helped meld Rowan County’s agrarian side with the post-Civil War expansion, and a bigger industrial age was launched locally with the building of a new cotton mill in 1887.

Other factories followed, along with important wholesalers. The downtown area expanded, and Salisbury became a bigger marketing center for farmers.

By 1890, Salisbury was linked to a much bigger railroad network expanding up and down the East Coast and into the Midwest and beyond.

The development of Spencer Shops and its railroad town in the early 20th century symbolized the new age of steel for Salisbury and Rowan County.

Freeze said that while Salisbury wasn’t like Winston-Salem, whose economy centered on R.J. Reynolds, or Kannapolis, which had Cannon Mills, it did have the railroad.

And records show Salisbury — in this industrial age — had a sustained level of prosperity that was unequaled in other Piedmont towns, according to Freeze.

“Faulkner could never have come here and written a novel,” Freeze said, “because we were too complex.”

The private railcars luncheon-goers toured Friday represented, of course, an opulent side of industrialists who relied on the rails for business and recreational travel.

Built for $38,000, the Doris belonged to James Buchanan Duke of tobacco and power company fame. It was named for his daughter and only child, Doris.

“It’s a well-equipped piece of machinery,” Morrison said as visitors walked through. “Not a bad way to travel.”

After Duke, the Doris became property of the Western Railroad and two private owners before being donated to the museum. It has gone through  a couple of major, expensive upgrades, and is air-conditioned and still track-worthy.

The all-wood Loretto was built for $40,000 and is named for a Pennsylvania town where Schwab grew up. It eventually became the property of Lancaster & Chester Railway, which was owned by the Spring family of Spring Mills in South Carolina.

The Loretto was donated to the Transportation Museum in 1978.