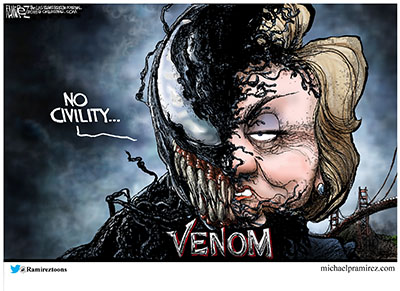 The consensus on civility emerging from Democratic Party leadership in the wake of Justice Brett Kavanaugh’s confirmation seems to be, if you can’t beat ’em join ’em. Hillary Clinton told CNN that it was impossible to be civil to Republicans until the Democrats win back Congress. And on Wednesday a tape surfaced of Eric Holder, the former attorney general, saying that instead of Michelle Obama’s “When they go low, we go high,” the Democratic plan should be “When they go low, we kick them.”

Will the Democrats do better in November’s midterm elections and beyond by adopting Trumpian tactics of incivility? And if they would do better by going full Donald Trump, would it be worth it?

The answer to the first, pragmatic question may well be yes. The 2016 presidential election has been interpreted as proof that the way to win elections in this closely divided political era is to energize the base, not to win over moderate swing voters. And right now, the Democratic base is feeling pretty angry.

Yet the assumption that anger will turn out decisive voters needs close examination. The last time the Democratic base — especially black voters — turned out in force was for Barack Obama. In 2008, Obama voters were motivated by hope, not anger against Republicans. In 2012, many blacks turned out again so that Obama’s accomplishment in getting elected president wouldn’t be repudiated. It’s not clear (yet) that anger and incivility would bring out those voters in 2018.

Then there’s the fact that emerging Democratic stars don’t sport angry personas. Beto O’Rourke, running for the U.S. Senate in Texas, has refused to run negative ads against the Republican Ted Cruz. O’Rourke may not win, but he’s much closer than anyone would have expected. He has motivated the base with heartfelt speeches that reflect emotion but not incivility.

The same is true of further left candidates like Alexandria Ocasio-Cortez in New York and Ayanna Pressley in Boston. Both women of color broke through and won their primaries for U.S. House seats by being engaging and passionate — but not uncivil.

Nevertheless, assume that Clinton and Holder have it right politically, and that the Democrats should name-call and catcall like Trump to find a path to victory. I still want to argue that they shouldn’t do it. Winning the House would be enough to block Trump from pursuing his legislative agenda, and winning the Senate would allow us not to spend the next two years obsessing over Justice Ruth Bader Ginsburg’s health. But even these gains aren’t worth the Democratic Party selling its soul and embracing incivility.

What’s so great about civility? Citizenship. The word “civility” derives from the Latin word for citizen.

Civility is the basic belief that the other side in the political debate is just as committed to good citizenship in the republic as you are. Civility leads to polite behavior because it starts with the good faith assumption that the other side is well-intentioned, even if its beliefs are wrong.

To be sure, a good faith assumption can be overcome by the facts. Self-conscious racists and white nationalists aren’t well-intentioned. And treating them with civility can be a moral error.

But when it comes to the great majority of Republicans, including many Trump supporters, Democrats would be making an error of major proportions if they adopted the belief that all such people are lacking the intention to make the republic the best it can be.

Ultimately, the final breakdown in the norms of civility is civil war — defined as the state in which citizens cease to share a common purpose, and become enemies. When civil war happens, republics die.

That’s why Democrats shouldn’t abandon civility just for some short-term gains. The game isn’t worth the candle. A republic in which everyone acts like Trump isn’t a republic worthy of the name. Rather, it’s a forum for rage and contestation just waiting for the next blowup.

Once a party has squandered civility, it’s very, very hard to get it back.

Historically, winning moderate swing voters has been the key to winning national elections. It’s how all presidents since Ronald Reagan won, until Trump. Trump may have upended our expectations and norms. But he probably hasn’t inaugurated a new law of politics.

When the time comes again to win elections the old-fashioned way, the Democrats will want to claim the mantle of civility. Respecting its norms now will keep that possibility alive.

Noah Feldman, a Bloomberg Opinion columnist, is a professor of law at Harvard University.