A healthy addiction: For artist Chuck Whitley, the drive to create offers healing 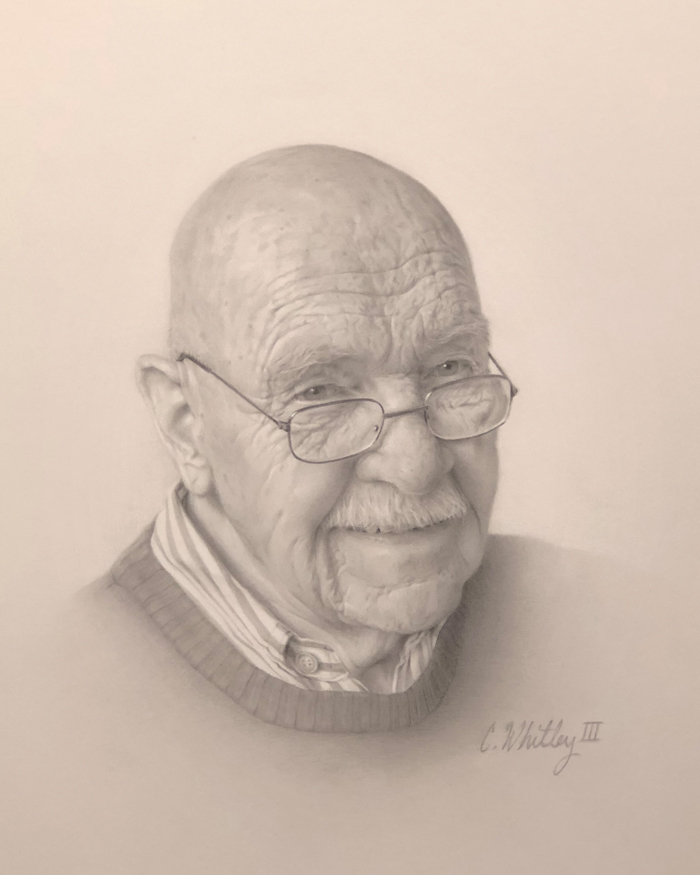 Whitley created this pencil drawing for the Faces of Trinity Living exhibit at Waterworks Visual Arts Center. A reception will be held Oct. 18 from 4-5:30. 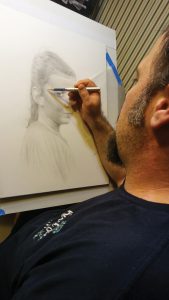 Chuck Whitley spends his evenings creating art. He might put in a few hours, or he might labor well past midnight. You could call it a passion, or you could call it a habit. Both would be correct.
Before art, drinking alcohol was Whitley’s habit, one that was negatively affecting his life. About five years ago, he decided he’d had enough – he didn’t want to live that way anymore.
In a dream, he saw a fork in the road. On the left side he saw himself in a cardboard box, holding a liquor bottle, with the last drop going down his throat. It was a vision of emptiness. On the right side was a contrasting scene of healing and wholeness, complete with “a good woman” and friends who had previously been lost to him because of his drinking.
He didn’t become sober right away, but he kept remembering the dream, he said, and finally, he told himself enough was enough.
Whitley went to rehab for 28 days – not very long to change a 20-year habit, but it worked. When he came out, “a lot of things changed in my brain,” he says. He was inspired to be creative again, and his previous love of drawing returned.
“I started getting the spark,” he says. He told himself that instead of drinking, he’d draw pictures.
“Art is a better addiction,” he says. “I think about doing artwork all the time, like I used to think about drinking.”
Of course Whitley can’t think about his art all the time. For the past 13 years he’s worked as a computer-aided design (CAD) engineer for a glass company. But when he’s not doing that or making music or spending time with his fiancée, Leslie Esquivel (who turned out to be the “good woman” in his vision), Whitley works on art commissions.
While Whitley may not be getting rich making portraits, the satisfactions are many, including becoming friends with his clients.
A few years back he painted a portrait for a woman of her son who had died. “She calls me from time to time to thank me and tell me how much she loves the painting,” says Whitley, who adds that they typically talk for at least an hour when she calls. “Hearing how happy my clients are is something you can’t put a price on.”
Whitley recently donated a piece of art for this year’s Faces of Trinity Living art exhibit, a beautiful pencil drawing of a participant named Charles.
“The piece he did of Charles is absolutely amazing,” said Patty Messick, a staff member at Trinity Living Center. “He puts love into his portraits; you can tell.”
This is the second time Whitley has donated a piece of art to the Faces exhibit, which used to be held annually but is now every other year. His last Faces contribution was a lovely painting of a participant named Pearlina. 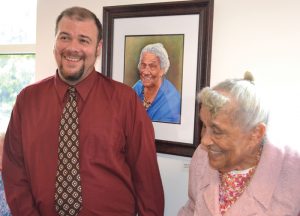 Whitley believes he was two years old when he started drawing, and he remembers his great grandmother telling him he could be a good artist. Art was always his favorite subject in school, and he learned how to paint at Salisbury High School from Frank Saunders. Through high school (he finished at North Rowan) he’d sell portraits to make money. He later studied art at Central Piedmont Community College but had to drop out to take care of his young son.
He considers himself largely self-taught, and when he’s not working on a commission piece, he strives to improve his technique.
His goal is to eventually create instructional videos, through YouTube or another platform.
Whitley’s other creative outlet is music. For six years he’s been in a band called Made of Monuments. He serves as bassist and, these days, the designated driver.
You can see Whitley’s portrait of Charles at the “Faces of Trinity Living” exhibit at Waterworks Visual Arts Center. The exhibit is open now, and a public reception will be held from 4-5:30 p.m. Thursday, Oct. 18. Whitley will be at the reception, as will many of the other artists who created portraits for the exhibit.

The 17 portraits in the “Faces” exhibit will remain on exhibit at Waterworks during regular gallery hours through Nov. 3 in the center’s second floor Delhaize Conference Room. Waterworks is located at 123 E. Liberty St. Hours are 10 a.m.-5 p.m. Monday-Friday and 10 a.m.-2 p.m. Saturday.

For more about the adult day services offered at Trinity Living Center, a program of Lutheran Services Carolinas, call 704-637-3940.

October is poppin’ out with popcorn delights