Livingstone falls again at home — this time to Shaw 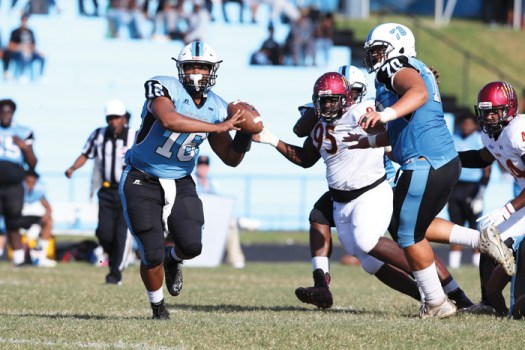 Livingstone QB Alexis Archie (16) rolls out of the pocket and completes a pass to put Livingstone on the 5 yard line during the game against Shaw. James Sipes for the Salisbury Post. Oct 13, 2018 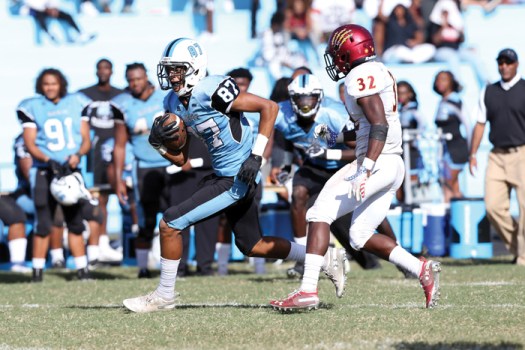 Cory Hall (87) for Livingstone picks up enough yardage on a pass for a first down with Shaw’s Eric Walker in pursuit. James Sipes for the Salisbury Post. Oct 13, 2018 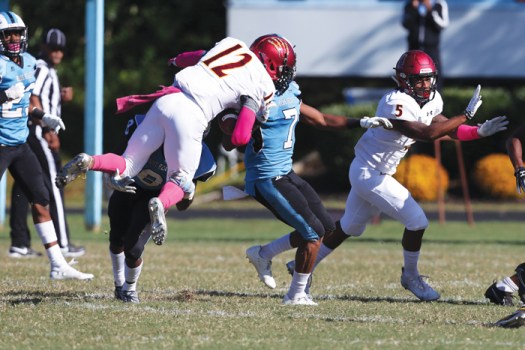 Shaw’s Daniel Bender (12) appeared headed for a touchdown before Livingstone’s Darrell Mathis (8) was able to bring him down. James Sipes for the Salisbury Post. Oct 13, 2018 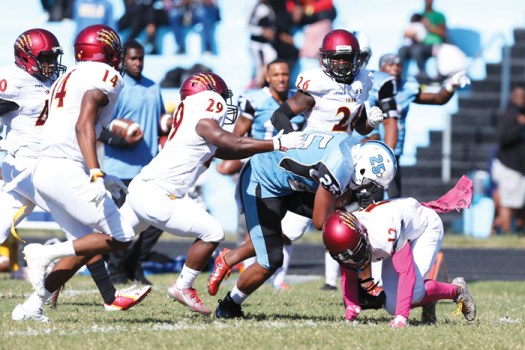 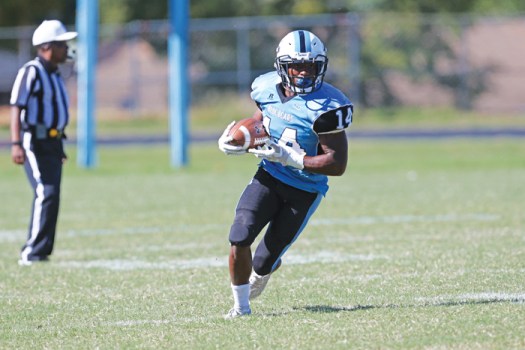 Running back Marcus Baisy, Jr (14) moves the Blue Bears out to the 49 yard line in the game against Shaw. James Sipes for the Salisbury Post. Oct 13, 2018 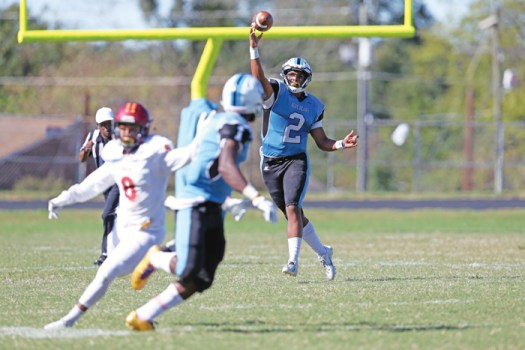 SALISBURY — Livingstone’s reeling football team needed a kick-start in the worst way — and nearly got it Saturday afternoon.

The Blue Bears racked up 437 total yards while their defense procured four turnovers and limited visiting Shaw to 22 yards rushing. But instead of being rewarded at Alumni Stadium, they absorbed a weighty, 37-28 CIAA defeat.

“I’m at a loss for words,” coach Daryl Williams said, moments after Livingstone (2-4, 1-3) dropped its third straight decision and descended into a tie for last place in the Southern Division standings. “Our record says we’re 2-4, but it doesn’t feel like that. We’re much better than that.”

Livingstone’s final home game produced yet another signature performance, with disappointment written all over it. The Blue Bears allowed a safety for the second consecutive game, missed both an extra-point attempt and a two-point conversion try and yielded four touchdowns in the second half. The luster from back-to-back shutouts posted in September hasn’t disappeared, but it’s certainly fading.

“We’ve got to stop playing Livingstone football and start playing for real,” defensive end Devonte Adams said after recording two sacks and recovering a fourth-quarter fumble. “We’ve got to be us.”

Winning coach Adrian Jones had kind words for the Blue Bears after Shaw (2-4, 1-2) passed for 323 yards and snapped a three-game losing streak.

“Well, they fought us to the end,” he said. “They have good coaches and good players, but I thought we stuck together a little better. We always play to win and we’ll take one any way we can get it.”

Shaw secured this one when freshman defensive back Jaleel Scroggins intercepted a pass by lefty Alexis Archie — the third Livingstone quarterback called to active duty — and returned it close to midfield with 1:25 to play. It nullified a nine-play charge that saw the Blue Bears reach the SU 2-yard line, thanks largely to Archie’s 29-yard completion to wideout DeAndre Vickers. Archie replaced injured reserve Xavier Longerbeam (right foot) in the waning moments. Longerbeam was subbing for injured starter Mile Hayes, the 18-year old who was helped off the field after passing for 234 yards and three touchdowns.

“(Hayes) just had to settle down,” said Vickers, one of 10 LC seniors recognized before kickoff. “He may have been nervous in our last game, but he was back today.”

Livingstone broke a 9-9 halftime tie early in the third quarter when he snagged an 11-yard TD pass from Hayes on the right side, capping an 85-yard drive that featured Bryan Digsby’s 25-yard pickup on a faked punt.

“We kind of had them where we wanted them,” said Vickers, who caught four balls for 61 yards and two touchdowns. “Third-and-10 from the 11, so we called a curl route. They played off-coverage and gave us exactly what we wanted.”

Shaw, fueled by senior quarterback Keon Marsh (26-for-36, 323 yards, 3 TDs), scored on consecutive possessions and went up, 23-16 with 5:33 remaining in the third period. On a third-and-7 call, Marsh connected with receiver Raymond Green, Jr. — who high-stepped past a defender on a 36-yard scoring play.

“We decided to pick up the tempo and start playing down hill,” Marsh said. “Running misdirections and lateral plays. For a while we kept them  in the game making little mistakes, but then we responded better. We’re hoping this is the one that starts the train.”

Livingstone squandered a chance to tie the score moments later, following a 14-yard Hayes-to-Vickers touchdown play, but Antoine Akunda’s PAT attempt knuckled low and wide-left. Shaw stretched its lead to 30-22 on a short TD pass as the quarter ticked to a close before the Blue Bears used Longerbeam’s 13-yard strike to Anthony Faraimo to close within two early in the final period. Given a second opportunity to knot the score, Longerbeam was pressured in the pocket and threw incomplete on a two-point conversion try.

It hurt even more after Shaw capitalized on a short field and surged ahead 37-28 with just 5:48 to play. Longerbeam’s galliant, late-game charge up the hill began to fizzle when he hurt his foot on a second-and-long scramble from the SU 35 – and burst when Archie was picked off.

“We know what we’re capable of,” defensive leader Armond Cox said after making 12 tackles. “But sometimes we overthink and get out of our game. And Shaw, like any good team, will make you pay for your mistakes.”

NOTES: Shaw running back Dorrel McClain finished with 151 all-purpose yards (95 receiving, 56 rushing) and scored three touchdowns. … Livingstone only possessed the ball for 1:16 in the first quarter, but finished on the plus side. … Hayes completed 20 of 31 passes, but none after a short gainer to sophomore Brandon Duncan on the final play of the third quarter. … LC closes its season with three road games, beginning next Saturday afternoon at Winston-Salem State.