Kershaw struggles as Dodgers lose to Brewers in NLCS opener 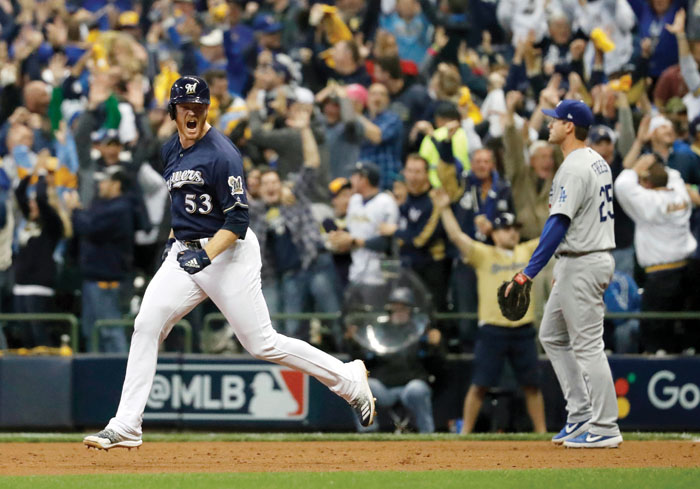 By JAY COHEN, AP Sports Writer
MILWAUKEE (AP) — Clayton Kershaw pounded his glove with his left hand and yelled “Let’s Go!” as he walked off the mound.
Pretty soon, he was gone.
Kershaw was hit hard in the shortest start of his spotty playoff career, and the sloppy Los Angeles Dodgers lost 6-5 to the Milwaukee Brewers in Game 1 of the NL Championship Series on Friday night.
Los Angeles committed four errors, including two by catcher Yasmani Grandal in Milwaukee’s two-run third. But another playoff flop for its ace left-hander might be its biggest concern as it tries to cool off streaking Milwaukee.
Game 2 is Saturday afternoon at Miller Park.
Kershaw holds the team records for playoff wins (eight), starts (21), innings (133) and strikeouts (144), but is just 8-8 with a 4.26 ERA in 26 career postseason appearances. The Dodgers dropped to 13-13 when the three-time NL Cy Young Award winner takes the mound in the playoffs.
The 30-year-old Kershaw quieted some of those October questions when the Dodgers won the NL pennant last year for the first time since 1988, going 3-0 with a 3.82 ERA in six appearances. He pitched six sparkling innings in the NLCS-clinching victory at Wrigley Field against the Cubs, and worked four scoreless innings in relief in Los Angeles’ Game 7 loss to Houston in the World Series.
After he was passed over for Los Angeles’ Game 1 start in the NL Division Series this year, the 2014 NL MVP responded with eight innings of two-hit ball in a 3-0 victory over Atlanta.
The victory against the Baby Braves was one of his best playoff performances. The loss against the Brewers was one of his worst.
The night started to get away from Kershaw and the Dodgers when Brandon Woodruff led off the third inning with a massive drive to right-center, becoming the third reliever in major league history to homer in a postseason game.
Kershaw glanced back with an incredulous look as Woodruff’s ball soared over the wall, tying it at 1 and sending a charge through the sellout crowd of 43,615.
A passed ball and an interference call on Grandal helped set up Hernan Perez’s sacrifice fly before Kershaw minimized the damage by striking out Mike Moustakas, stranding two runners in scoring position and leading to his emotional display as he headed toward the dugout.
Whatever he was trying to do, it didn’t work.
Los Angeles went down in order in the fourth and Milwaukee’s first three batters reached in the bottom half, chasing Kershaw and producing two more runs on Domingo Santana’s pinch-hit single. Santana swiped second and scored on Ryan Braun’s two-out single against Ryan Madson.
Braun’s clutch swing closed the book on Kershaw, who was charged with five runs, four earned, and six hits. He dropped to 2-5 with a 5.24 ERA in 11 career NLCS games.
Kershaw’s shortest playoff start before the loss to Milwaukee was four-plus innings in a 9-0 loss at St. Louis in Game 6 of the 2013 NLCS, ending Los Angeles’ season.
___
Jay Cohen can be reached at http://www.twitter.com/jcohenap
___
More AP MLB: https://apnews.com/tag/MLB and https://twitter.com/AP_Sports