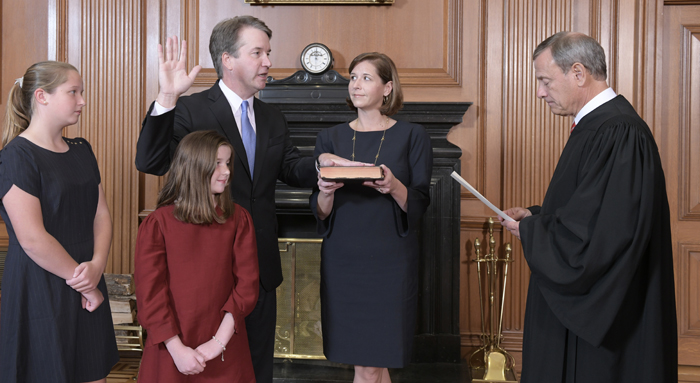 Chief Justice John Roberts, right, administers the oath to Judge Brett Kavanaugh in the Justices' Conference Room of the Supreme Court Building. Ashley Kavanaugh holds the Bible. In the foreground are their daughters, Margaret, left, and Liza. Fred Schilling/Collection of the Supreme Court of the United States via AP

At his White House swearing-in ceremony, Justice Brett Kavanaugh described a role for the Supreme Court that was often obscured during his rancorous confirmation process.

“It is not a partisan or political institution,” the new justice reminded the crowd of well-wishers. “The justices do not sit on opposite sides of the aisle. We do not caucus in separate rooms.”

But President Donald Trump took a very different tone, highlighting the partisan animosity Kavanaugh tried to put behind him and accusing Democrats of pursuing “a campaign of political and personal destruction based on lies and deception.”

Which spirit will govern the court that Kavanaugh now joins? Will it follow the ideal he espoused, remaining insulated from the political frays of the day? Or will it become the court Trump and his followers are praying for, committed to following a right-wing agenda on issues ranging from abortion and same-sex marriage to gun rights and affirmative action?

The person who will most influence the answer to that question is Chief Justice John Roberts. Yes, he belongs to a five-member conservative bloc all appointed by Republican presidents. But during his 13 years as chief, Roberts has occasionally strayed from ideological purity while demonstrating a deep concern for the reputation of the court.

And he now assumes extraordinary leverage, potentially serving as the crucial fifth vote on many close decisions while also choosing who writes the majority opinion in those cases. “The spotlight will shift to the chief justice, who will be viewed, rightly or wrongly, as the swing justice,” Thomas Dupree, a former top official in the Bush Justice Department, told Fox News. “In many ways, I think this would be a role the chief justice would welcome.”

Vikram Amar, dean of the University of Illinois law school, said of Justice Roberts in the Wall Street Journal: “He does have a sense of history and how the court will be judged. It may fall on Roberts to be even more of a self-conscious brake on the court than he was before.”

Many liberals remain deeply suspicious of Roberts, and for good reason. He’s written some deeply damaging opinions, starting with his evisceration of the Voting Rights Act, and he fiercely dissented from the court majority that legalized same-sex marriage.

“This is a dangerous, even scary, moment for the court,” thundered Washington Post columnist Ruth Marcus, “one in which Kavanaugh’s admonition against seeing the court in partisan terms seems laughably naive.”

But the “sense of history” Amar describes can change and shape a justice. And when Roberts provided the deciding vote to uphold most of the Affordable Care Act, conservatives led by Trump were apoplectic.

“Justice Roberts really let us down,” candidate Trump told a campaign rally in December 2015. “What he did with Obamacare was disgraceful.”

Moreover, Roberts (who received 78 Senate votes, including 22 from Democrats, in 2005) has regularly expressed dismay over the politicization of the court. “We don’t work as Democrats or Republicans, and I think it’s a very unfortunate perception that the public might get from the confirmation process,” he told a Boston audience in 2016.

Comments like that lead some legal scholars to hope the chief will act as a brake on fellow conservatives. Writing in the Washington Post, two law professors — Lawrence Baum of Ohio State and Neal Devins of William and Mary — noted that as chief, Roberts “has a special responsibility regarding the court as an institution.”

“Through his presiding role in the court’s conferences and his assignment of court opinions, he might redouble his efforts to find compromises that avoid party-line votes in cases,” they wrote. “And to the same end, he may consciously soften his own positions on some issues.”

Justice Elena Kagan, speaking recently at Princeton, pointed out that for the last 30 years — starting with Sandra Day O’Connor and continuing with Anthony Kennedy — the court has had a justice in “the center,” someone who didn’t act in a totally predictable way and often determined the outcome of closely argued cases.

Those swing justices played a very useful role, Kagan shrewdly observed, because they “enabled the court to look as though it was not owned by one side or another and was indeed impartial and neutral and fair.”

How does the chief justice want the Roberts Court to be remembered? As “owned by one side,” or as “impartial and neutral and fair”?

How he answers that question could have a profound impact on the nation’s law and politics for the next generation.