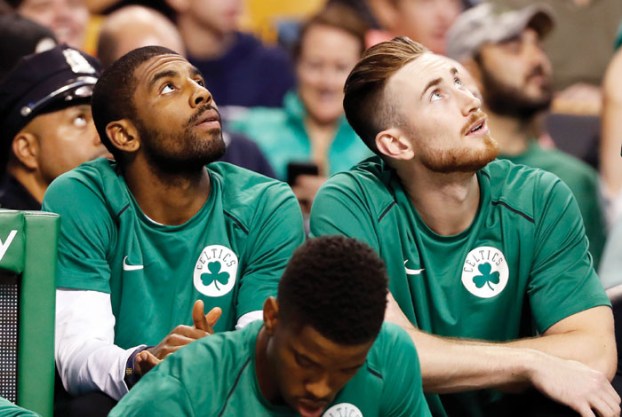 FILE - In this Oct. 9, 2017 file photo Boston Celtics' Kyrie Irving, left, and Gordon Hayward look on from the bench during the first quarter of a preseason NBA basketball game against the Philadelphia 76ers in Boston. Last season hopes were high for the Celtics in the preseason with a new-look roster that included Irving and Hayward. Five minutes into the season opener everything changed with Hayward’s gruesome leg injury. It happened again late in the season with Irving was lost to knee surgery. With both back and healthy, Boston is embracing being called the presumptive favorites in the Eastern Conference. (AP Photo/Winslow Townson, file)

With LeBron gone, Eastern Conference set for a new champ 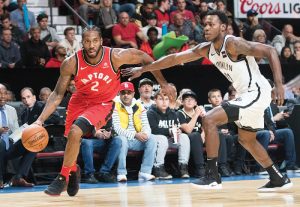 The roadblock has been removed. With LeBron James gone, the path to the NBA Finals from the Eastern Conference is open again.

Boston, Philadelphia, Toronto and more are hoping to win the race to it.

James ruled over the East for eight years, making four straight trips to the finals from Miami and then moving back to Cleveland in 2014 and getting there every year since.

From Boston to Indiana, up north in Toronto all the way down to Atlanta, teams would emerge with what they thought was a title contender only to see James send them home for the summer.

Now King James has abdicated his throne and moved to Los Angeles, and there should be rejoicing in the land he left behind.

“It’s a new lease on life in the Eastern Conference,” said Hall of Famer and TNT analyst Reggie Miller, who faced a similar situation when he played in the East during the era of Michael Jordan’s Bulls.

“It’s great that LeBron has taken his talents out West because it opens up the doors for not only a lot of these young players, but these organizations now. Fresh blood, something new to kind of see who can compete for that Eastern crown.”

The Celtics nearly won it last year, falling to the Cavaliers in Game 7 of the Eastern Conference finals. They were without the injured Kyrie Irving and Gordon Hayward, and now that the two stars are healthy and have rejoined Jayson Tatum, Jaylen Brown, Al Horford and the rest of a deep team that made a valiant run without them, Boston is probably the favorite in the East.

But there’s intrigue beyond that, which rarely existed during James’ reign. Philadelphia finished strong in its first season with Joel Embiid and Ben Simmons playing together, and now might get a full one with 2017 No. 1 pick Markelle Fultz joining them after his shoulder problems last season.

Toronto shook up a 59-win team by firing coach Dwane Casey and shipping DeMar DeRozan to San Antonio in the trade for Kawhi Leonard, and Indiana bolstered a team that took Cleveland to seven games in the first round.

Any of them have a chance to get to the place that James wouldn’t let them.

“An appearance in the finals is going to be sweet,” Embiid said.

A look at the East, in predicted order of finish:

1. Boston — Depth of talent is not only tops in the East, but comes closest in the NBA to rivaling Golden State’s.

2. Philadelphia — If either Simmons or Fultz develops a jump shot to open things up more for Embiid, look out.

3. Indiana — Victor Oladipo has emerged as an All-Star and the Pacers are balanced behind him.

4. Toronto — If Leonard is fully healthy and motivated, Raptors added a top-five player to a 59-win team.

5. Milwaukee — Giannis Antetokounmpo is going to make the Bucks fun to watch in their new arena.

6. Washington — John Wall and Bradley Beal will give the Wizards plenty on the perimeter, but they need Dwight Howard provide a boost on the interior.

8. Detroit — A full season with Andre Drummond and Blake Griffin together should be enough to get the Pistons back into the postseason.

9. Cleveland — Kevin Love and the remainder of the Cavaliers that James left behind should still be good enough to fight for a spot in the top eight.

10. Charlotte — The Hornets will host an All-Star Game in February. They’ll try to host playoff games in April.

11. Orlando — Steve Clifford is the latest coach to try to mix a collection of young players into one that can defend enough to be a decent team.

12. Brooklyn — Nets made a seven-win improvement last season even while being dismal at defending and rebounding. Do either better and they can take another leap.

14. Atlanta — Trae Young may be exciting to watch, but he won’t be able to stop another long season of losing in Atlanta.

15. Chicago — The Bulls of Tom Thibodeau were veterans who always defended hard. The Bulls of Fred Hoiberg have been none of the above.

CANADA’S CHANCE: The Raptors gambled on acquiring Leonard from San Antonio, and now Toronto has a year to show him it’s worth sticking around when he becomes a free agent next summer.

BEST MAN: A popular question after James left was who is the best player now in the East? Irving, Embiid, Antetokounmpo and Leonard are among those who can make compelling cases.

HOWARD’S HEALTH: Dwight Howard has sat out his first preseason with the Wizards because of a balky back, the kind of injury that can sometimes linger, and Washington needs a presence in the middle no matter how good its backcourt is.

OPENING NIGHT PREVIEW? Cleveland and Boston met in the opening game in the East last season and ended up squaring off in the conference finals. This time, it’s Boston and Philadelphia to open things in the East and they’ll be good candidates to close them.

By Tom Canavan AP Sports Writer EAST RUTHERFORD, N.J. (AP) — All the Philadelphia Eagles needed to get over their... read more