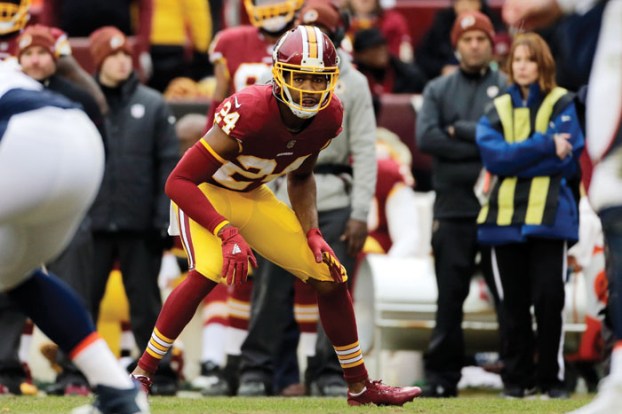 FILE - In this Dec. 24, 2017, file photo, Washington Redskins cornerback Josh Norman (24) looks across the line of scrimmage during an NFL football game against the Denver Broncos, in Landover, Md. What a week for Washington Redskins cornerback Josh Norman. A benching during a blowout. Criticism from a former teammate. Barbs from an opposing receiver. And what better way to cap it all off than a matchup Sunday against Cam Newton and the rest of the visiting Carolina Panthers, the club that abruptly parted with Norman two years ago. (AP Photo/Mark Tenally, File)

What a week for Josh Norman, taking on the Panthers 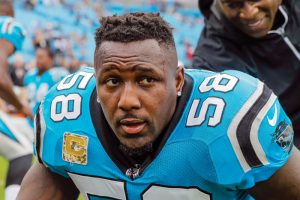 FILE- In this Nov. 5, 2017, file photo, Carolina Panthers’ Thomas Davis gets ready for the team’s NFL football game against the Atlanta Falcons in Charlotte, N.C. The Panthers, coming off a dramatic 33-31 win over the New York Giants, get a big boost on defense today as former All-Pro outside linebacker Thomas Davis will return from a four-game suspension for PEDs. (AP Photo/Bob Leverone, File)

There was a benching during a 24-point loss. Criticism from a former teammate. Biting Twitter barbs from an opposing receiver.

What better way to cap it all off than a matchup for his Redskins (2-2) on Sunday against Cam Newton and the visiting Carolina Panthers (3-1), the club that abruptly parted with Norman about 2½ years ago.

“Old friends. They’re coming to town, and I get to see them and go at each other. They know how I am. Trust me. I know how they are. So it’s going to be quite an exciting time,” Norman said. “I’m looking forward to them. I know (Newton’s) got something special cooked up for us.”

Norman was coming off an All-Pro season and a Super Bowl appearance when the Panthers put the franchise tag on him in March 2016, a move many figured was a precursor to a long-term deal. Fast-forward six weeks, though, and Carolina rescinded the tag offer, allowing Norman to become an unrestricted free agent.

Within a couple of days, he signed a $75 million, five-year contract with Washington. For whatever the reason — and there are various theories out there — things have not gone all that well for Norman, who turns 31 in December and is currently up to 19 games in a row without an interception.

The downswing culminated in Washington coach Jay Gruden’s decision to play a rookie instead of Norman coming out of halftime during a 43-19 loss at New Orleans on Monday night.

Then came all sorts of theories about what might be wrong with Norman, from his age (courtesy of Saints receiver Michael Thomas) to his interest in becoming a celebrity (brought up by ex-Redskins defensive back DeAngelo Hall) to the shift from Carolina’s zone coverage to Washington’s man-to-man principles (referenced by Panthers coach Ron Rivera).

Newton, a friend who participates in Norman’s charity volleyball tournament, maintains that QBs still need to be wary of the guy.

“He’s not a person who hesitates to take chances, and that’s his gift and his curse,” Newton said. “I still go into each and every game pointing out who the impact players are on every defense, and he’s definitely one of those players.”

Here are some things to know about the Panthers and Redskins:

A Redskins defense that had zero answers against Drew Brees now goes up against Newton, who is having a so-so season thus far but always comes up big against Washington. The 2015 NFL MVP is 4-0 against the Redskins, with nine TDs and zero INTs, a passer of rating of 115.4 and two rushing scores. “Cam is a beast, man. He can do it all. He can pass. He can run it. He’s an extra running back when he’s back there,” Redskins safety D.J. Swearinger said. “They’ve got a long list of good playmakers, man. So we’ve got our hands full.”

Defensive linemen Jonathan Allen and Daron Payne played together at Alabama, were first-round draft picks the past two years, and account for nearly half of Washington’s sacks this season. “They are two guys that I never have to worry about: ‘Hey, hustle. Hey, run to the ball.’ These guys are always playing hard, playing fast, playing physical,” Gruden said, “and you can build around those two cats for a long time.”

The Panthers are hoping to get back three-time Pro Bowl tight end Greg Olsen; he broke his right foot in Week 1. “The band is back,” Newton said with a big smile. The QB’s favorite target for quite some time, Olsen strung together a trio of 1,000-yard seasons before initially injuring his foot in 2017 and missing nine games. If some wonder whether Olsen might be rushing back, he said: “I wouldn’t put myself out there if I couldn’t help the team.”

Carolina is counting on linebacker Thomas Davis, who returns from a four-game suspension under the league’s policy on performance enhancers to give a big lift to a defense that struggled to pressure the quarterback last week. Davis is the team’s all-time leading tackler and joins Luke Kuechly to provide what Gruden called “the best linebacking duo in pro football, in my opinion.”