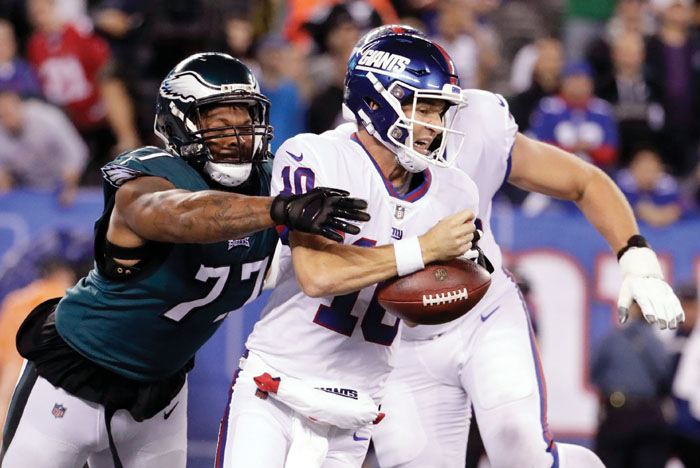 EAST RUTHERFORD, N.J. (AP) — All the Philadelphia Eagles needed to get over their Super Bowl hangover was a little more urgency, some big plays — and a timely game against the New York Giants.

Carson Wentz threw a season-high three touchdown passes and the Eagles got an early lift from their defense and special teams in beating the struggling Giants 34-13 on Thursday night, avoiding their first three-game losing streak since the 2016 season.

Wentz sandwiched touchdowns passes of 13 and 1 yard to Alshon Jeffery around a 10-yarder to tight end Zach Ertz to help the Eagles (3-3) build a 31-6 lead. They beat the Giants (1-5) for the fourth straight time and seventh in eight games.

Corey Clement scored on a 1-yard run and Jake Elliott added field goals of 33 and 30 yards for the defending Super Bowl champions.

Rookie halfback Saquon Barkley scored on a 50-yard run and rushed for 130 yards in one of the few bright spots for the Giants’ offense, which was booed repeatedly in losing at home for the third time. Aldrick Rosas had field goals of 33 and 21 yards.

This was seen as a must-win game for both teams in the weak and wide-open NFC East, and the Eagles went out and grabbed it.

They came into the game having scored seven points in the first quarter and they doubled that against New York.

Eli Manning was under pressure all game and finished 24 of 43 for 281 yards.

On the opening series, Kamu Gugier-Hill intercepted Manning’s pass that was tipped by fellow linebacker Jordan Hicks and he returned it to Giants 16. Three plays later, Wentz (26 of 36 for 278 yards and no interceptions) was forced out of the pocket and found Jeffery after getting all day to throw.

A 46-yard run by Barkley set up Rosas’ 33-yarder to cut the gap to 7-3, but the Eagles took control later in the quarter after DeAndre Carter returned a punt 23 yards to the New York 44. Passes of 17 to Jeffery and 14 to Clement set up Clement’s touchdown run.

A spectacular tackle-breaking run by Barkley on a 55-yard screen pass helped cut the lead to 14-6 in the second quarter but Wentz hit a wide-open Nelson Agholer on a third and 3 and connected with Ertz for a 21-6 lead on the next play.

Elliott made it 24-6 just before halftime and Philadelphia put the game out of reach with a 75-yard drive that ended with a short Jeffery TD catch.

The only thing meaningful after that was Barkley’s touchdown run.

BARKLEY GAINS: Barkley has gained at least 100 yards from scrimmage in each of his first six career games. He is one off the NFL rookie record set by Kansas City’s Kareem Hunt.

Home field hasn’t meant any advantage in recent years for the Browns, who entered this season with three wins in their last 27 home games at FirstEnergy Stadium, dubbed “The Factory of Sadness.”

Madness has been the norm so far this season.

The Browns (2-2-1) have played two overtime games already at home and rallied to win a nationally televised Thursday nighter to end their 19-game winless streak and breathe life into a fan base that couldn’t take much more misery.

Lifeless for years, the Dawg Pound is howling once more, and Browns coach Hue Jackson begged Cleveland fans to bring the noise for Sunday’s game against the Los Angeles Chargers (3-2).

“I want them to be as loud as they have ever been,” Jackson pleaded. “This week our players will need that. We need that assistance for them. They have been outstanding, but boy, we need a little bit more from them this week, too. “

Jackson’s hoping a roaring crowd will make things tougher on Chargers quarterback Philip Rivers, who is off to one of the best starts of his 15-year NFL career. Rivers has thrown 13 touchdown passes and two interceptions, and Jackson believes Cleveland’s crowd can be as disruptive as any of the Browns’ 11 defenders.

“He’s one of the best that have played the game,” Jackson said. “It does not look like he is slowing down at all. He is one of the top quarterbacks in this league, bar none. We need 12 people when they are on offense, and the 12th person is going to be our crowd.”

Rivers often resets his offense before the snap, changing the plays after taking a look at how the defense is aligned. The Browns experienced that last season in a 19-10 loss to the Chargers.

“It is a great, kind of an old-school NFL atmosphere,” he said.

But while the setting may feel dated, Rivers knows there’s nothing out of style about the Browns and their young defense, which is leading the league with 15 takeaways. After playing against the Browns last season, Rivers felt it was just a matter of time before they jelled.

“It did not feel like they were an 0-16 team or 0-14, whatever they were when we played them last year,” he said. “It was a good football team. They just did not find ways to win. I remember our guys walking away with a heck of a lot of respect for that defense.”

This time, the Chargers will also have to deal with a hungry Cleveland crowd that has watched rookie Baker Mayfield lead two wins already.

“We feed off of the crowd’s energy,” Mayfield said.

“We need to continue that, and this needs to be a place that people need to fear coming to play. It needs to be so loud that they can’t communicate, and it needs to be a harsh place for an offense to come in.”

In a season of balls going wide right, wide left and clanking off uprights around the NFL, the Chargers and Browns have had more than their share of kicking issues.

The Chargers have missed a league-leading four extra points, the Browns are tied for second with three. The teams are also near the bottom in field-goal accuracy: San Diego is 9 for 12, Cleveland 8 for 12.

Chargers coach Anthony Lynn gave kicker Caleb Sturgis a tepid vote of confidence by signing a new holder last week, but Sturgis has been slowed by a quad injury. The team signed Michael Badgley, a rookie from Miami who could kick against the Browns.

Meanwhile, Cleveland’s on its second kicker: Greg Joseph, who missed a field goal and PAT last week before knuckling through a 37-yard field goal to beat Baltimore in overtime.

Browns wide receiver Jarvis Landry didn’t set out to catch the most passes in league history over his first five seasons. But that’s what he did.

Landry surpassed Larry Fitzgerald (426) last week and enters Sunday’s game with 429 receptions. Landry said he idolized Fitzgerald and never considered the mark until he was well on his way.

“I broke the second-year mark, then the third, the fourth and now the fifth,” he said. “That is when it kind of hit me, and it has been like that ever since.”

The Browns will honor retired left tackle Joe Thomas , by adding 10,363 — the number of consecutive snaps he played over 11 seasons — into the team’s ring of honor.

“I will never forget walking on that field when he was down there and him not being able to get up, understanding that this might be it,” Jackson said. “To watch and look back on his career and see what he has done, man, that’s amazing to me. Nobody else has ever played that many consecutive snaps, and I do not know if anybody else will do that again for a long time.”

What a week for Josh Norman, taking on the…