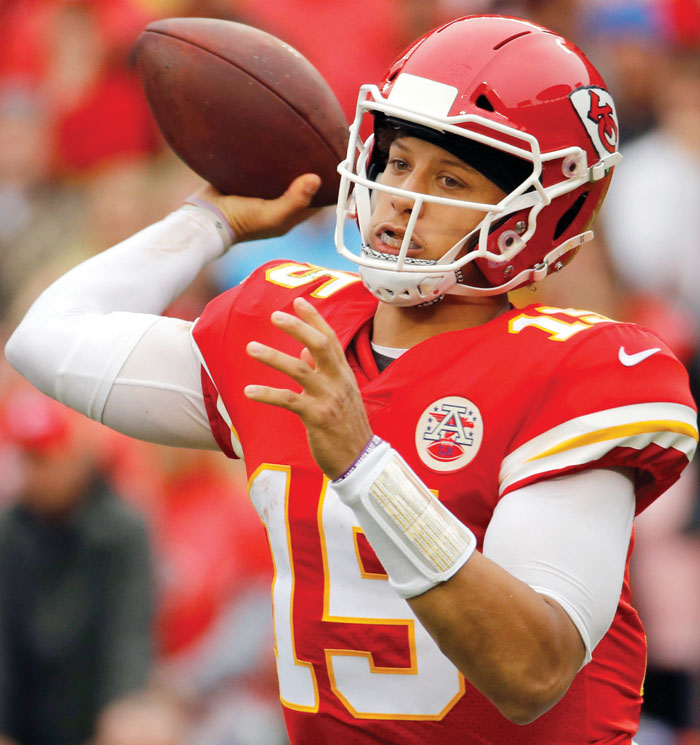 FILE - In this Oct. 7, 2018, file photo, Kansas City Chiefs quarterback Patrick Mahomes (15) throws a pass during the first half of an NFL football game against the Jacksonville Jaguars, in Kansas City, Mo. New England Patriots' Tom Brady, who will retire as possibly the best to ever play the position, faces Kansas City’s Patrick Mahomes, the most electrifying quarterback in the NFL this season, on Sunday. (AP Photo/Charlie Riedel, File)

At least old enough to remember a much different era for young NFL quarterbacks.

As a rookie in 2000, Brady remembers being nowhere near seeing the field as a starter.

“I was sitting in the stands, eating nachos before games. I wasn’t playing,” he joked this week.

Now he looks around at a league in which Mahomes is one of several young quarterbacks in their first or second year starting for teams. Brady also started his second season, but it was hardly the plan as he replaced an injured first stringer, Drew Bledsoe.

“Football was different then,” Brady said. “I think now in some ways pro football is more glorified college football…the transition is a more similar game than it used to be when I first started.”

It’s an atmosphere that has allowed Mahomes, who will be starting for Kansas City when the Chiefs (5-0) visit New England (3-2) on Sunday night, to emerge as the most electrifying quarterback in the NFL this season.

Mahomes leads the NFL with 14 touchdown passes through Week 5 and has won each of his first six NFL starts, dating back to his lone start last season. With a win against the Patriots, Mahomes would become the sixth quarterback since 1970 to win his first seven career starts.

While Mahomes said running the jet sweeps and run-pass option plays he did in college has helped with his transition, he also spent a fair amount of time studying Brady’s approach in New England.

“My coach in college was Kliff Kingsbury, and he actually was a backup for Brady at one point, and so he showed me things that he liked with Tom and his pocket movements and stuff he did within the pocket that I’ve tried to put in my game a little bit,” he said.

While Chiefs coach Andy Reid won’t disparage Smith, he acknowledges Mahomes brings a lot of intangible qualities to their offense. Reid also is cognizant that the season is still young.

The 23-year-old is not a rookie, but he basically is, Reid said.

“He’s going through an NFL season — his first one — and there are all kind of challenges that come with that, and no bigger one than this week,” Reid said.

Here are some things to watch for in Sunday night’s game:

Despite Kansas City’s unblemished record, the Patriots enter Sunday’s game as a three-point favorite. It’s for good reason. Since 2001, 41 times a team has visited Foxborough with a better record than the Patriots. In those games New England is 30-11.

Since starting the season 1-2, New England has outscored opponents 76-31 over its last two victories, at home vs. Miami and Indianapolis.

Brady has an NFL-record 199 career regular-season victories and can become the first quarterback in league history to reach 200 for his career. He enters this week tied with Colts kicker and former teammate Adam Vinatieri for the most career wins in the regular season and playoffs combined with 226.

The Chiefs’ maligned defense forced Jacksonville into five turnovers last week, not to mention showed a mean streak for the first time all season. Defensive tackle Chris Jones took it a bit too far, getting ejected for throwing an elbow at a Jaguars lineman after a play.

“I don’t even remember what happened,” Jones said with a wry smile. “But we’re not going to let anyone push us around.”

“Tanoh will have a chance to play,” Reid said, “but we just have to make sure we are OK in that spot just in case.”

The game features the two winningest active coaches in Bill Belichick (281) and Reid (199); Belichick is 5-2 lifetime against Reid. “I mentioned this before,” Reid said, “when you play good football teams, you love that challenge. You spend a lot of hours doing what we are doing. You love the challenge of it, and I think as players and coaches you cherish those things. It is a neat part of the business.”

What a relief: Dodgers next up for Brewers’ bullpen