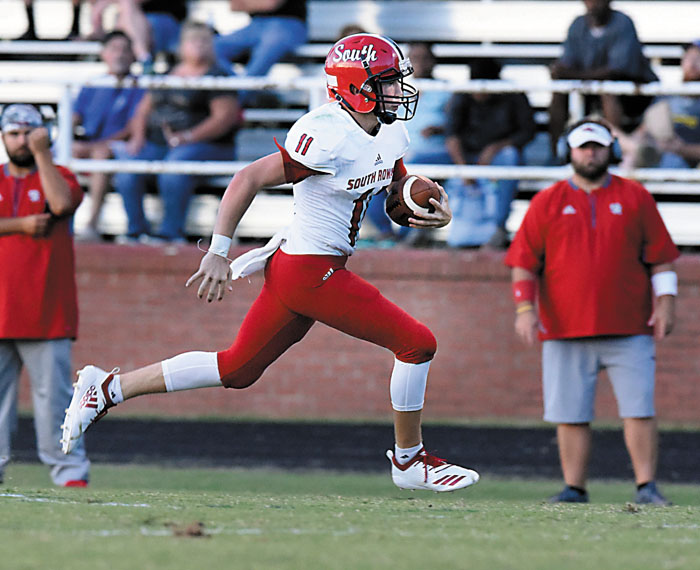 Thomasville beat the Raiders, 29-8, in a matchup of squads trying to break out of the middle of the pack in the Central Carolina Conference.

“Turnovers killed us,” South head coach Daniel Yow said. “Five of them in the second half.”

The first half went well for the Raiders (2-6, 2-4 CCC). South’s improving defense pitched a shutout the first two quarters and South got a 3-yard touchdown pass from Drew Huffman to Cameron Hurd in the opening seconds of the second quarter. Hurd ran for a 2-point conversion and an 8-0 lead at halftime.

Feronta Thomas scored on an 8-yard run for the Bulldogs, who were celebrating homecoming, with 2:51 left in the third quarter.  Landon Johnson’s 2-point conversion tied the game at 8-all.

Huffman was intercepted shortly after that touchdown by Jordan Williams. Then Javon Cunningham broke a 54-yard scoring run to give Thomasville (5-3, 3-3 CCC) its first lead at 15-8.

After South was stopped on a fourth-down gamble in its own territory, Williams caught a 19-yard TD pass to push Thomasville’s lead to 22-8.

Williams, who had a big night, had a pick-six to complete the scoring with about three minutes left.

Bryson Bebber had an interception for the Raiders.