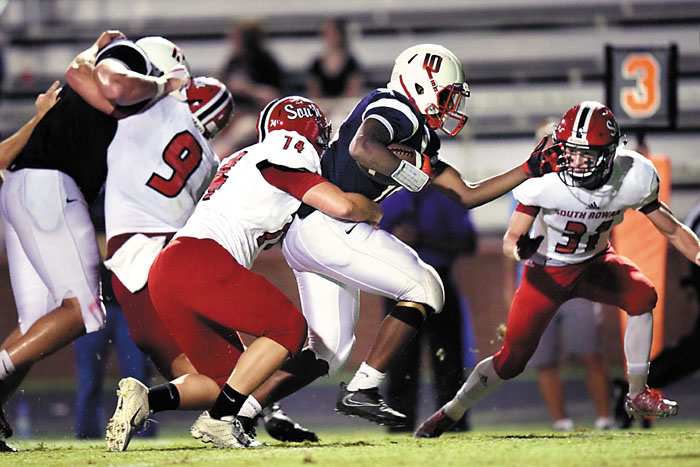 East's Isa'ah Cauthen 10 and South's 74. photo by Wayne Hinshaw, for the Salisbury Post

Another crazy, Hurricane-weather week, but with Salisbury-Rowan (and most other area school systems) operating on a two-hour delay today, most games should take place tonight as scheduled, albeit on soggy fields.

There were widespread power outages in Rowan on Thursday with trees down. There was some flooding and a number of roads were closed.

Temperatures are expected to dip into the 40s tonight, after being in the 80s last Friday, so take a jacket.

Kannapolis city schools are closed today. That was announced Thursday night. A decision on whether it’s safe for A.L. Brown to play its homecoming football game against Cox Mill will be made at some point today. Keep an eye on that.

Chatham County schools will be closed today, so the long trip by North Rowan’s football team  to Bear Creek to play Chatham Central has been postponed. The game will probably be played on Saturday. Keep an eye on that situation, as well.

In the latest MaxPreps rankings, none of the six Rowan schools are listed among the state’s top 100 teams, although West Rowan (No. 102) and North Rowan (No. 103) are knocking on the door for that modest achievement. It really is that close between West and North as far as who is the county’s best team. But West narrowly won the showdown between the two and is headed to yet another unofficial county championship —  assuming it can handle Carson on Oct. 26.

With four straight wins, Salisbury (No. 201) has been trying to make up for an 0-2 start that included a loss to a Carson team ranked 187th in the state by MaxPreps. The Hornets take on Ledford, ranked 98th, tonight.

The Carson-East Rowan game figures to be close and exciting. MaxPreps doesn’t see much difference between the two. After four straight losses, East is ranked No. 192.

Ranked No. 334, South Rowan will be an underdog on the road at Thomasville (No. 258). Thomasville is one of the improved teams in the state. Thomasville finished last season ranked 349th.

While Rowan football isn’t perceived as powerful on the state level, there have been terrific individual performances.

Leading candidates for offensive player of the year in the county at this point include North running back Malcolm Wilson, West receiver/returner Jalen Houston and West QB Payne Stolsworth.

North linemen Benjamin Caldwell has been an impact player on both sides of the ball, which is highly unusual. We may need a new award for him.

There are two really big games tonight in the North Piedmont Conference. The winner of South Iredell-West Rowan may be the team to beat in a league that looks really wide open. Everyone in that six-team league is a potential contender except North Iredell.

The other biggie is Ledford at Salisbury, with both teams unbeaten in the Central Carolina Conference, although it will be a surprise if the Hornets can do much against  Ledford’s overwhelming defense.

That Cox Mill-A.L. Brown South Piedmont Conference  game, if it gets played, also should be fun.

Cabarrus has five teams ranked in the top 58 in the state, with Northwest Cabarrus (No. 16) and Central Cabarrus (No. 18) both off to 7-0 starts. Hickory Ridge is No. 41, A.L. Brown is No. 50, and Cox Mill is ranked 58th.  Northwest’s Trojans and Central’s Vikings square off tonight. Maybe the winner will finally get ranked in the AP top 10 for 3A. The Post has been voting for both of them for a number of weeks.

The picks are 31-10 for the season. They were 4-2 last week, with the A.L. Brown-Central Cabarrus overtime game (that one did live up to the hype) see-sawing into the miss column. The picks also were way off, as usual, on Davie County, although Davie’s injury situation had something to do with a lopsided loss at R.J. Reynolds.

It’s a really pivotal road game for the Falcons (4-3, 1-0 NPC). If they win, they’re very much in the running for their first conference championship since 2011. West is 2-2 on the road. South Iredell (3-4, 1-0 NPC) is the defending champ in the NPC and edged Stateville last week. The Vikings are 1-2 at home.

South’s best win last season came, 29-25, against the Bulldogs and was fueled by a pick-six by safety Christian Reynolds, who dashed more than 100 yards.

Thomasville’s defense has toughened up a lot under a new coaching system. The Bulldogs lost to Salisbury, 10-7, and led most of that game.

Thomasville (4-3, 2-3 CCC) has the home field advantage.  South has a chance, but the Bulldogs have to be favored.

Both teams run the ball really well and both have strong offensive lines.

This one might go by in a hurry. Both teams are likely to throw fewer than 10 passes.

North has won all five meetings with Chatham Central, including a 49-6 pummeling last year.

Ledford (6-1, 5-0) is probably a top-10 2A team, although the Panthers aren’t in the state rankings. Their only loss was early in the season to undefeated Randleman. Ledford has shut out four straight opponents.

It’s homecoming for the Hornets (4-2, 4-0), who have improved on offense the last few weeks and boast a solid defense.

Off last week, Salisbury has had two weeks to prepare, and you never know. Maybe Gill takes an interception or a punt to the house.

Davie (3-4, 0-1 CPC) figures to play a lot better for homecoming than it did on the road last week, but it still looks like an uphill fight.

A.L. Brown is 4-0 at home and 0-3 on the road. It’s homecoming in Kannapolis, and the Wonders have to move past a draining overtime loss to Central Cabarrus.