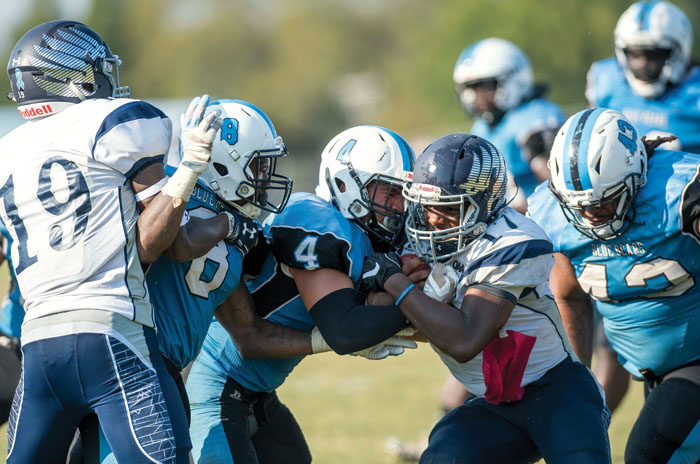 SALISBURY — The problem with having three home football games is that Senior Day can come early.

That’s the case for Livingstone as the Blue Bears host Shaw at Alumni Memorial Stadium. The 1 p.m. contest is Livingstone’s last home game this season.

The Blue Bears’ late-game collapse last Saturday against St. Augustine’s led to a 26-15 homecoming loss. Livingstone’s other home contest was a 30-0 win over Lincoln on Sept. 22.

A successful season for Coach Daryl Williams’ team is still there for the taking. At 2-3 overall and 1-2 in the CIAA, the Blue Bears have just one opponent left that currently has a winning record — Fayetteville State at 3-1. Shaw comes in this Saturday with a 1-4 mark, although the lone win was a convincing decision (27-9) over SAC opponent Mars Hill.

Shaw has a senior quarterback, Keon Marsh, who is completing 61 percent of his passes for 223 yards per game. He has thrown for six touchdowns but also has six interceptions. Marsh transferred to Shaw from Hampton, a Division I program.

Livingstone has decent defensive numbers, ranking second in the CIAA in yards allowed per game (309). The defensive effort only trails Elizabeth City State’s 302 yards per game. Shaw, this week’s opponent, ranks 10th in the CIAA, allowing 436 yards. However, to be fair, Shaw’s numbers include two games against Division I opponents — losses to Hampton (38-10) and Campbell (42-0).

One telling statistic for the Blue Bears: On 22 scoring opportunities inside the opponents’ red zone, Livingstone has scored just 10 touchdowns and three field goals. That’s coming away empty nine times (59 percent), only ahead of Lincoln in the CIAA.

“We’ve been trying to address that,” said Williams. “It’s a collective thing, not just one person or thing. I’ve got to call better plays, the offensive line has to block better, the receivers have to run better routes and the quarterback has to stay with the designed play.”

Livingstone’s true freshman quarterback, Miles Hayes, has played well in most games this season, although last week, he struggled enough in the first half that veteran QB Xavier Longerbeam provided some first-half relief.

Longerbeam, a junior, completed seven of 11 passes for 147 yards last Saturday against St. Augustine’s, including a 66-yard scoring toss to receiver Anthony Faraimo.

But Longerbeam was not available in the second half due to dehydration and cramps, according to Williams, and Hayes returned. The freshman passed for just 69 yards but he did rush for 45.

Williams said that Hayes will start against Shaw, but Longerbeam will be ready to go, if needed.

“Longerbeam  wants to be a coach someday and he has adjusted to his role,” added Williams. “He knows if things get shaky, he has to be ready to go. Miles was struggling last week and that’s why Xavier went in.

“Xavier is a great leader and great teammate,” continued Williams. “He is supporting Miles 100 percent.”

Hayes has thrown for an average of 172 yards per game (seventh-best in the CIAA), with seven TDs and six interceptions. Hayes’ one glaring weakness thus far is accuracy. He has completed just 71 of 146 passes (49 percent).

Meanwhile, the Blue Bears’ ground attack is averaging 135 yards each game, which sounds OK, but is well behind the league leaders. Justin Ruffin, of Salisbury, leads the running backs with 202 yards and two TDs in five games.

NOTE: Williams noted that while there are only three home games this season, the schedule flips and the Blue Bears will have at least six home games in 2019.