Students dive deep into the story of Alexander Hamilton 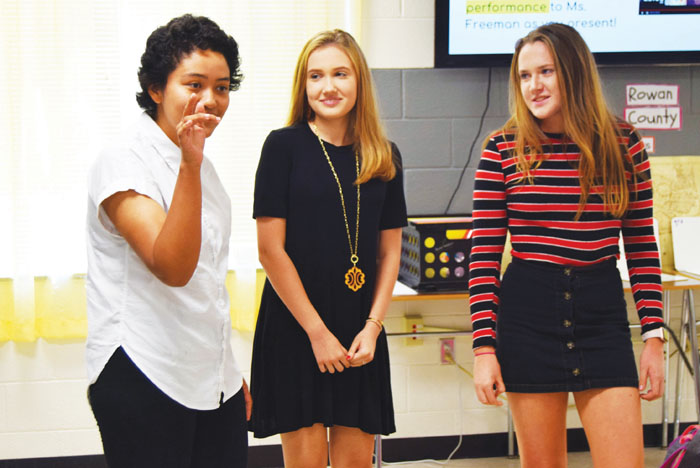 SPENCER — Tenth-graders at North Rowan High School are getting the opportunity of a lifetime: the chance to show their stuff on the big stage in front of a Broadway cast.

In November, members of Emily Freeman’s history class will travel to Charlotte to see the acclaimed musical “Hamilton.” After the show, students will present their own performance pieces about the founding fathers before the musical’s cast.

The experience is made possible thanks to the Gilder-Lehrman Institute of American History, which offers the opportunity to classes across the nation and works to foster an interest in Revolutionary War history.

In order to make it to the play, students have to use primary source documents to create a performance piece about a figure of the American Revolution.

That includes historical figures like George Washington; Hamilton’s wife, Elizabeth; female spies who helped the Revolutionary cause; or former slaves who fought for their country.

The focus, Freeman said, is “to bring the history — and specifically the story of Hamilton — to life.”

“The purpose is to get kids involved in history and to experience it and to connect to it,” she said.

Freeman said she learned of the opportunity while studying Hamilton during a summer fellowship with the Gilder-Lehrman Institute. She’d already been a fan of the musical but said she really loved the opportunity to delve further into the life of the “10-dollar founding father.”

When she learned of the opportunity for students, “I immediately latched onto it,” Freeman said.

Since the start of school, students have worked hard to examine primary-source documents provided by the institute and to craft a performance piece.

“It’s a really different approach to history that we don’t always get,” she said.

While performances have to fit into certain categories — monologues, scenes, raps, songs or poems — Freeman said she was careful to otherwise give students creative freedom.

“I wanted it to be something that they felt passionate about and something they enjoyed doing. … I really wanted them to kind of have fun with it,” she said.

As the performance date drew near, students worked hard to practice their pieces. Presentation day in Freeman’s classroom was filled with rap and rhyme as students set a beat and let loose.

“It’s a really different approach to history that we don’t always get,” Freeman said.

The opportunity is unique because many people never have the chance to see a live Broadway-level performance.

“I really don’t think this is something that kids will ever have that many opportunities to do,” she said.

The group will see “Hamilton” on Nov. 1, and excitement — among teachers, students and school staff — is mounting.

“We’re just really excited. I can’t wait for the kids to see it in person and really experience it,” Freeman said.