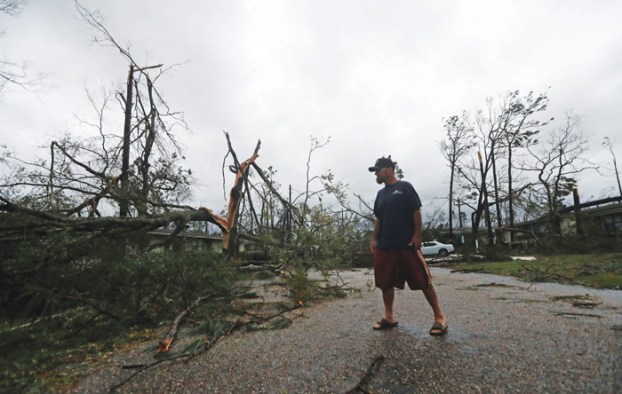 Phil Kirk didn’t know whether to be mad at his daughter or cry out to God for the safety of her family, who were in the path of Hurricane Michael as it rolled ashore in Florida on Wednesday.

Kirk, a Rowan County native and former state senator, had been worried for much of day until he got to speak with his daughter, Wendi Hamilton, by phone. She lives in Panama City Beach, Florida, with her husband, Jeremy, and two of their three children.

The family — which includes Zane, a high school junior; Bree, a senior; and Madison, who attends Meredith College in Raleigh — decided to stay as the hurricane wreaked havoc.

“They got through the worst part and lost power. The wind is still blowing at 100 mph,” Kirk said.

He said the eye of the storm passed over his daughter’s home, but that didn’t mean he was less worried.

“To be completely honest, I’ve alternated from being upset for them not leaving and crying that they would be safe,” Kirk said.

He’s been glued to the television around the clock but says his daughter told him it’s not as bad as forecasters are saying on the news.

Kirk said he told his daughter that he could see for himself how bad it is.

“It is scary watching TV now as roofs are flying off and trees are falling in Panama City Beach now. It appears that the wind is still blowing at approximately 150 mph,” he said.

“It’s been very difficult,” he said of not knowing, “but there’s not a lot you can do but pray.”

He could only speculate why they stayed — to protect their family-owned business, Crystal Coast Mirror Maze in the downtown area. It’s about a block from the Gulf of Mexico.

Kirk said their homebuilder promised that their house was built to withstand hurricane-force winds.

Kirk is less optimistic, he said, because the area has never had winds this strong. Weather experts are calling Hurricane Michael the strongest hurricane to hit the continental U.S. in 14 years.

He said his daughter and son-in-law told him they feared it would be more dangerous to travel on the roads than it would be to stay home.

“I disagreed. I think when told to evacuate, you should,” he said.

Kirk’s daughter, who was born in Salisbury, and her family have lived in Florida for 20 years.

He was able to reach his daughter Wednesday afternoon by phone despite her not having power. She told Kirk that they lost some siding on the house but it had been improperly installed. A camera facing the door of their business shows it did not sustain any damage.

Kirk’s son-in-law, Jeremy, has a friend who is a Florida police officer who said everything looks fine in the area where their business is located.

Kirk said it’s “not over yet, but it could have been much, much worse.”