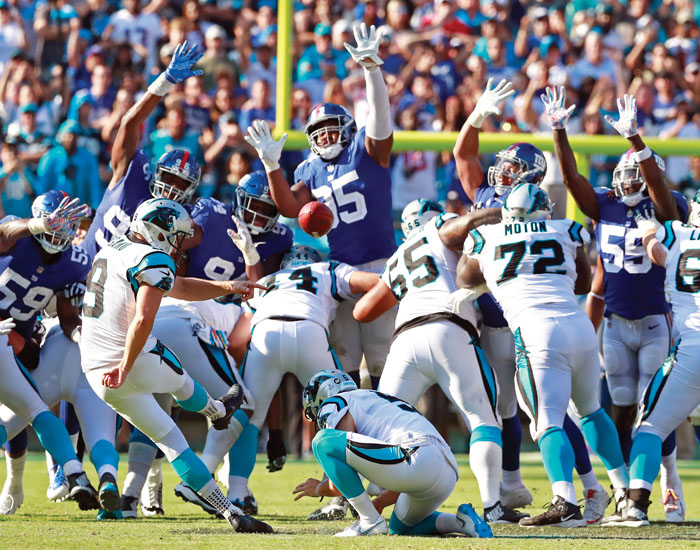 CHARLOTTE (AP) — When Graham Gano got home with the football he kicked 63 yards to give the Carolina Panthers a dramatic win over the New York Giants, he knew exactly where he was going to put it.

Gano took the ball into his office and placed and placed it neatly on a kicking tee — one autographed by Tom Dempsey.

It seemed only fitting, Gano said.

It was Dempsey, after all, who was the only kicker in league history to boot a game-winning 63-yard field goal prior to Gano’s heroics last Sunday that gave Carolina a 33-31 victory. Dempsey’s kick came on Nov. 8, 1970, helping the Saints beat the Lions 19-17 — 17 years before Gano was born. Matt Prater holds the NFL record for the longest field goal of 64 yards, but it wasn’t a game-winner.

Gano said that while he’s never met Dempsey, now 71, he’s always admired his accomplishment from afar. He has watched the historic kick on You Tube several times and even stood at the site of Dempsey’s kick at Tulane University, which is no longer used for football but now a common area for students.

He kept the tee in his office as inspiration.

“I would look at that tee sometimes and be like, man, that would be awesome to have that opportunity to do that,” said Gano, a converted soccer player who didn’t start playing football until his freshman year of high school. “So to have that chance on Sunday, it was like everything came full circle.”

Gano received the plastic orange tee as a Christmas gift from his wife’s uncle back when he was a kicker at Florida State. It came with a certificate of authenticity and a picture of Dempsey signing it.

“Hey, I thought it was the coolest thing ever,” Gano said with a wide smile. “To a lot of people it might not be all that to them, but to me it was really, really cool.”

When Gano ran on to the field with 6 seconds left, he said had no idea exactly how long the kick was from.

He said he was too busy doing what he normally does before every kick — lining it up and making sure he had good footing, all before the play clock expired. He didn’t find out it was a 63-yarder until after the ball arched over the crossbar — with a few yards to spare — to give Carolina the lead with 1 second remaining and was mobbed at midfield by teammates .

Gano said he was never nervous, either.

He’d made longer kicks — his longest being 75 yards — in practice.

On Wednesday, coach Ron Rivera and quarterback Cam Newton wore t-shirts to their news conference that read “Gano lo Gano.” It was a tip of the cap to the Panthers’ Spanish broadcast crew and the words they used to describe Gano’s winning kick on Sunday. The verb “ganar” means “to win” in Spanish, and when conjugated the meaning translates to “Gano to win!”

“A great quarterback is only as good as his kicker,” Newton said.

Gano is on quite a run for the Panthers.

Gano said the memories he will always have in celebrating with his teammates after the win are something he will cherish forever, even more so than the game ball.

He joked that he’s not sure how long the ball will actually stay in his office.

“My kids will probably take it down and throw it around and kick it,” he said with a laugh. “But that won’t bother me one bit.”

New York Yankees in danger of a decade without…