‘No one does it like Livingstone:’ Livingstone’s homecoming rivals other colleges 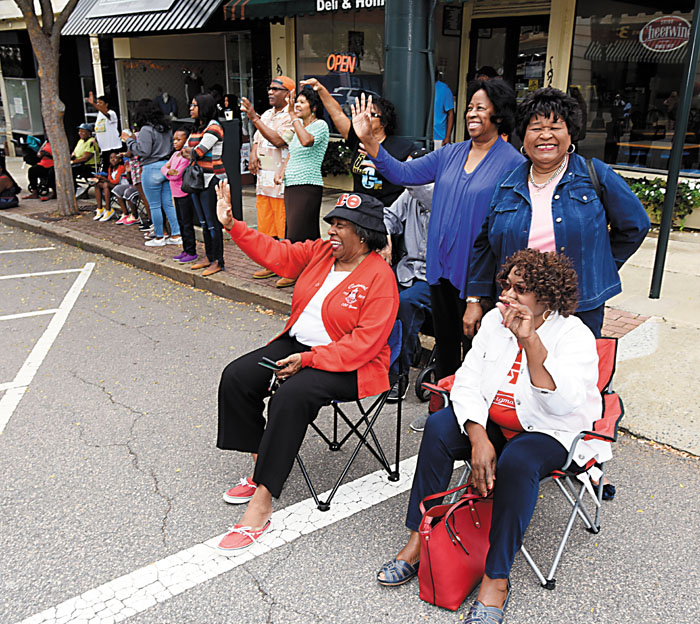 This group of 1970 graduates get together every year for homecoming at the Livingstone Homecoming Parade. Wayne Hinshaw/ for the Salisbury Post

SALISBURY — Livingstone College boasted 18 student activities and 19 alumni events for its 2018 homecoming under the theme “We Are Friends, We Are Family, We Are Livingstone.”

There was something for everybody, from gospel concerts and bonfires to bowling, basketball, kickball, and fashion and step shows.

Homecoming activities began Sept. 30 with a gospel concert and ended Oct. 7 with the Gospel Jazz Brunch.

“We started and ended on a spiritual note with so many fun and memorable events in between,” said college President Jimmy R. Jenkins, who thanked the homecoming committee for exceeding expectations.

The homecoming committee, led by Orlando Lewis, vice president of student affairs, and student activities director Anthony Brown, introduced new activities this year. Among them were a silent headphone party at the newly renovated pavilion, where participants wore headphones to hear music from two radio stations. Jenkins even donned a pair during his stop there.

Capitalizing off the trend of paint parties, Livingstone hosted Trap ‘n’ Paint, where students could grab a brush and paint the school’s mascot while listening to Southern hip-hop beats.

The tried-and-true activities remaining popular this year included the Stone Awards; Showtime at Varick; a fashion show that featured two student designers, among others; and the Greek step show, which was sold out.

Valworth Jones, a senior, and Lino Cartel, a former student and videographer, rocked the runway with clothes from their collection at Varick Auditorim that featured an LED wall backdrop.

Coronation was held Wednesday when Trent Gymnasium was transformed into “A Royal Night in Harlem.” The venue featured a jazz band and renaissance theme throughout complete with dancers provided by Triple Threat Dance Team.

Hunt is a senior biology major with a 3.5 GPA. She is a member of the Livingstone Concert Choir and Alpha Kappa Alpha sorority, for which she is Alpha Xi chapter president. After college, she plans to attend Meharry Medical School to become a pediatric oncologist. Her platform is :Diary of a M.A.D. (Making a Difference) Black Woman.” She said she believes she can make a difference by embracing and motivating students through interpersonal relationships.

Ransom is a senior liberal arts major with concentrations in English and theater. He is captain of the Blue Bears football team and a wide receiver. He is a member of the Student Athlete Advisory Committee and is vice basileus for Lambda Psi Chapter of Omega Psi Phi. His platform is “Be the Change.” He said he believes he can teach students to become change agents by encouraging them to understand in their hearts that they are kings and queens and can be the change they wish to see at Livingstone and in society.

He plans to pursue his master’s degree in mass communications and broadcasting and become a sports analyst.

“Livingstone’s homecoming has vast activities from beginning to end,” Lewis said. “When you take a look at our peer institutions, they do not have the number of activities that we provide for our students to enjoy and get the feel and fabric of our homecoming. We can just feel all of the electricity and the synchronicity of everyone working together.”

“Our small LC campus is a vibrant source of profound love, inspiration, encouragement and memories beyond what any words from Webster could adequately explain,” wrote Curtis Gatewood of Burlington, Class of 1982, in a Facebook post. “For now, I will have to settle for words like ‘love,’ ‘refreshing,’ ‘fun,’ ‘uplifting’ and ‘soul-stirring.’ Yes, we are family!”

“No one does it like Livingstone,” said Dexter Scott of Earthquake Productions of Durham, who does the staging for Livingstone’s homecoming. He said he has worked with several historically black colleges and Livingstone has more activities than any other them.