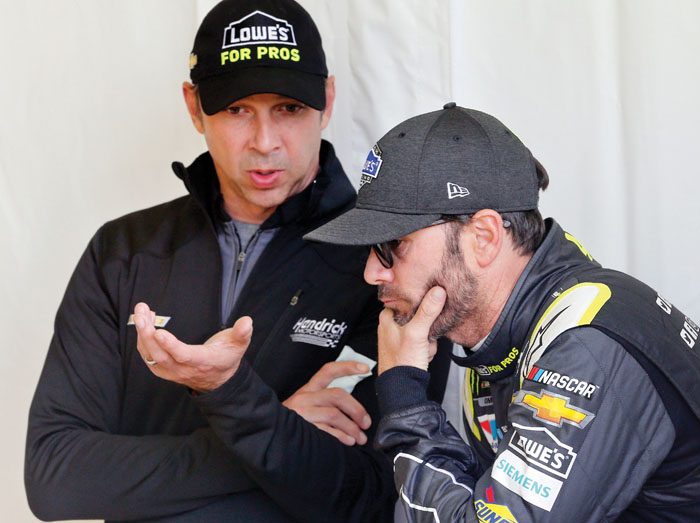 FILE - In this Friday, April 20, 2018, file photo, Jimmie Johnson, right, listens to crew chief Chad Knaus, as they wait for their car to get through inspection prior to qualifying for the NASCAR Cup Series auto race at Richmond Raceway in Richmond, Va. There will be no eighth NASCAR title for Johnson and Knaus. Hendrick Motorsports will split the driver and crew chief at the end of this season, the team announced Wednesday, Oct. 10, 2018. (AP Photo/Steve Helber, FIle)

CHARLOTTE (AP) — There will not be an eighth NASCAR title for Jimmie Johnson and Chad Knaus.

Hendrick Motorsports will split the driver and crew chief — the longest pairing in NASCAR — at the end of a disappointing season. Johnson has not won a race in 17 months and was knocked out of the playoffs in the first round. Johnson and Knaus won their record-tying seventh championship in 2016 but have slumped in the two years since.

“It’s no secret that Chad and Jimmie have experienced their ups and downs over the years,” owner Rick Hendrick said. “They’re fierce competitors, great friends and have immense respect for one another. They also fight like brothers. All three of us agree it’s finally time for new challenges and that a change will benefit them and the organization.”

Johnson and Knaus were partnered in 2002 when Knaus built the No. 48 team as part of a Hendrick expansion. They won a record-tying seven titles and made the playoffs in all 15 years of its existence.

There has sometimes been tension between the two, and Hendrick more than once considered splitting them for the good of the organization.   The time finally came Wednesday in a personnel shakeup announced by the rebuilding organization.

“Chad and Jimmie will go down as one of the greatest combinations in sports history,” Hendrick said. “They defied the odds by performing at a championship level for longer than anyone could’ve possibly imagined. What they’ve accomplished together has been absolutely remarkable and will be celebrated for generations. This has been an incredible, storybook run.”

The changes Hendrick will implement next season brings back former employee Kevin Meendering to the organization to partner with Johnson. Meendering spent 16 years with Hendrick beginning with a high-school internship in the chassis department.  His last three seasons have been at JR Motorsports, a Hendrick affiliate, as crew chief for Elliott Sadler.

Hendrick called Meendering one of the “most sought-after talents in the garage” and said he’ll be ready to take over the No. 48 team on his first day.

“He’s a respected, forward-thinking crew chief,” Hendrick said. “He’s the right fit for Jimmie at the right time. With an established No. 48 team behind them, I believe they will perform at a winning level next season and chase that eighth championship.”

Knaus, meanwhile, will crew chief William Byron and the No. 24 team next season.

Darian Grubb will be moved from Byron’s crew chief to a technical director role that supports Hendrick Motorsports’ engineering and vehicle development resources.

Hendrick Motorsports is in a rebuilding mode following the retirements of Gordon and Dale Earnhardt Jr. and the firing of Kasey Kahne. Johnson is the veteran, surrounded by rookie Byron, and promising youngsters Chase Elliott and Alex Bowman.

Elliott is the only Hendrick driver to win a race this season and locked himself into the third round of the playoffs with a victory last weekend at Dover.

“We believe these decisions will provide us with a tremendous opportunity for success in the future,” Hendrick said.  “As an organization, we are here to win races and compete for championships. Everything we do comes down to putting our people in the best possible positions to further that objective. Winning is what it’s all about.”