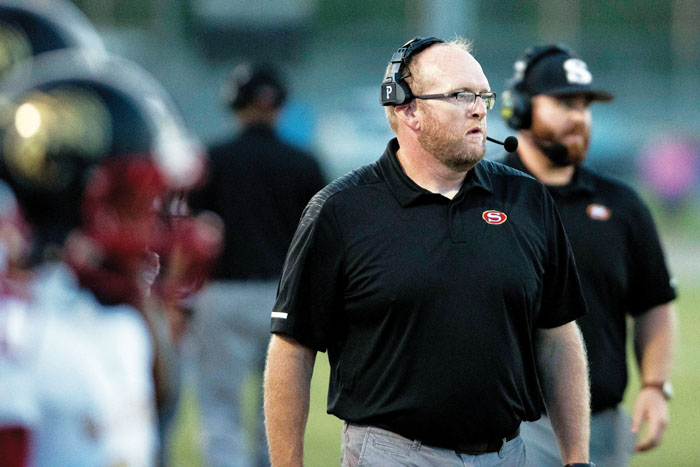 Salisbury (4-2, 4-0) was unable to play its scheduled Central Carolina Conference game last week due to the outbreak of a contagious bacterial skin infection at Oak Grove.

“It was disappointing because we’d won four in a row and had some momentum going,” Salisbury head coach Brian Hinson said. “We’d just started playing well on offense the last few weeks.”

The Oak Grove game has been rescheduled for Nov. 9. The playoffs have been moved back to Nov. 16.

The positive of the unexpected week off was getting players healthier. Two of Salisbury’s better athletes, Raheim Walker (ankle) and Jahbreel Russell (shoulder), would have been questionable, at best, last week, but both backs are probable for Friday’s key game with Ledford.

With Salisbury’s homecoming pushed back from last week to this Friday, Ledford  (6-1, 5-0)  becomes a less than ideal homecoming opponent. The Panthers figure to be the best team Salisbury has faced.

Inside linebacker Robert Little is the reigning CCC Defensive Player of the Year, and Hinson had high praise for both of Ledford’s interior defensive linemen. Ledford safety Coleman Reich is a UNC commit. Ledford has allowed a total of 40 points in seven games and has shut out four straight opponents.

Rain forced the Hornets to prepare for Ledford indoors on Wednesday.

“The kids did well,” Hinson  said. “This is a young football team and because of that we’re still getting a little better every day. The reps make us better and the competition we’ve seen has made us better. And the game is starting to slow down for our sophomore quarterback (Mike McLean).”

To put that number in perspective, the most carries Rowan County’s all-time leading rusher K.P. Parks ever had in a game was 40, and Parks only reached 40 carries twice in his amazing, four-year varsity career for West.

Pinckney piled up 228 rushing yards behind some strong offensive line play. East had an enormous rushing advantage in the game (328-75), but the Falcons still won with a big plays in the passing game and a kickoff return TD by Jalen Houston.

Pinckney also rushed for more than 100 yards in East’s loss to unbeaten Northwest Cabarrus, and in the win against South Rowan.

East takes on rival Carson on the road in a North Piedmont Conference game on Friday.

“East has a lot of really good players,” Carson coach Joe Pinyan said. “That’s a scary team. Sam Wall is a big threat. Pinckney is really good. Christian Bennett is one of the best defensive players in the county.”

Linebacker Nautica Patterson is averaging double-figure tackles per game and had another big night in North Rowan’s 40-7 homecoming victory against Albemarle on Friday.

North QB Willis Mitchell has thrown five touchdown passes the past three weeks, while tossing one interception. He also rushed for nearly 100 yards against Albemarle.

Albemarle scored a rushing touchdown early against North — becoming the first team to score against the sixth-ranked Cavaliers since Aug. 24. North has only allowed 34 points all season. Twenty were in the loss to West Rowan.

The key to the defense?

“We’ve got a lot of no-name guys on the defensive line who are doing a great job,” head coach Ben Hampton said. “They’re keeping offensive lines off our linebackers, and our linebackers are making a  lot of tackles.”

There’s a remodel taking place in North’s field house. The latest addition is a humongous table that would make King Arthur jealous.

Coaches found the table, along with six chairs that can seat an extra-large coach comfortably, on Craig’s List for a modest price.

Assistant coach Patrick Hampton sanded the table and burnished “Cavaliers” into it.

North travels to Chatham Central Friday, and it’s scary thinking what back Malcolm Wilson might to against a team that allowed 84 points last week. Wilson got two more touchdowns on Friday and has 12 for the season.

The aerial combo of Payne Stolsworth and Jalen Houston keeps getting it done.

It was Stolsworth’s second four-TD game of the season. He has at least one TD pass in every game and 14 for the season.

Stolsworth has 62 career TD passes in three years. The school record is B.J. Sherrill’s 66. The county record is 74 by East’s Samuel Wyrick.

Houston has nine TD catches this season. The county record for a season is 19 by West’s Kortez Weeks in 2016.

West kicker Federico Cruz was a factor on Friday, going 5-for-5 on PATS and putting two kickoffs in the end zone for touchbacks.

Suddarth is West’s leading tackler this season. He was the primary tackler 11 times against East, with nine assists. He has eight tackles for loss.

Lark was credited with nine tackles, plus one assist against the Mustangs.

Brush made six tackles and got his first interception of the season.

Michael Sloop, who has taken over as the Raiders’ primary running back the last three games, enjoyed a 100-yard night in the 48-28  home win against West Davidson.

South (2-5, 2-3) entered the Central Carolina Conference game averaging less than 10 points, but put up 33 in the first half.

“West Davidson was a big, very physical team, but our offensive line had a great night,” South head coach Daniel Yow said. “All five of those guys.”

DB Bryson Bebber had his second and third picks of the season for the Raiders, and inside linebackers Jarrid Nelson and Corey Hartsell led the defensive charge.

“West Davidson got some pretty good stats, but we stopped them when we needed to,” Yow said. “We also came up with five turnovers, and it was nice to be on the positive side of the turnover battle.”

South plays at Thomasville’s Cushwa Stadium on Friday. The Raiders beat Thomasville for the first time ever in 2017. The Bulldogs lead the series, 13-1.

Even during the throes of a four-game losing streak that started in August and lasted into October, Pinyan never doubted his team was getting better.

“We played well enough that we could’ve won at Davie, and our guys played a good second half at A.L. Brown,” Pinyan said. “I think our guys kept the right approach. They kept getting better and the schedule we played prepared us for conference.”

The win was the 28th for Pinyan at Carson. He and Carson’s first head coach, Mark Woody, have evenly split the school’s 56 football victories.

Career-wise the win was the 128th for Pinyan, who won an even 100 at Salisbury. He’s one behind Hall of Famer Bill Ludwig for third place on the county’s all-time list.

The right side of Carson’s line — tackle Nick Moore and guard Robert Barringer — had great games against North Iredell — as the Cougars churned for a school-record 442 rushing yards.

“We ran it behind those two guys a lot,” Pinyan said.”Nick Klein also played very well up front.”

Eric Turnbull went 7-for-7 on PATs.

“He had a strong game,” Pinyan said. “He executed on a really important onside kick to start the second half and he did a good job on his pooch kickoffs, putting the ball right where we wanted it.”

As far as pass defense, Carson remains a work in progress, but the Cougars did pile up sacks against North Iredell.

“Pass defense and cutting down penalties,” Pinyan said. “We’ve got to get better in those areas to have a chance.”

“He’s getting positive yards every time he carries it,” Pinyan said.

Safety Josiah Cauthen was in on 12 stops.

A dozen different players have scored touchdowns for the Wonders (4-3, 0-1).

The Wonders are preparing for another tough SPC game on Friday.

They are 5-0 all-time against Cox Mill, but this might be the best team the Chargers have had.

A.L. Brown will be glad to be playing this one at home. The Wonders are 4-0 at home, but 0-3 away from Kannapolis Memorial Stadium.

In Friday’s 28-10 loss to R.J. Reynolds to start Central Piedmont Conference play, Davie (3-4, 0-1) ran into all sorts of  unexpected trouble.  Davie had won eight in a row against the Demons.

Davie scored first for the seventh game in a row, taking a 3-0 lead when Skyler Schoppe converted a field goal after a Matt Hill fumble recovery.

Davie lost sophomore quarterback Nate Hampton to an injury in the first half . That led to the Friday debut of jayvee sensation Alex Summers.

It gets no easier for Davie on Friday. The War Eagles celebrate homecoming against a strong West Forsyth team that holds a 22-14 lead in the all-time series with Davie.