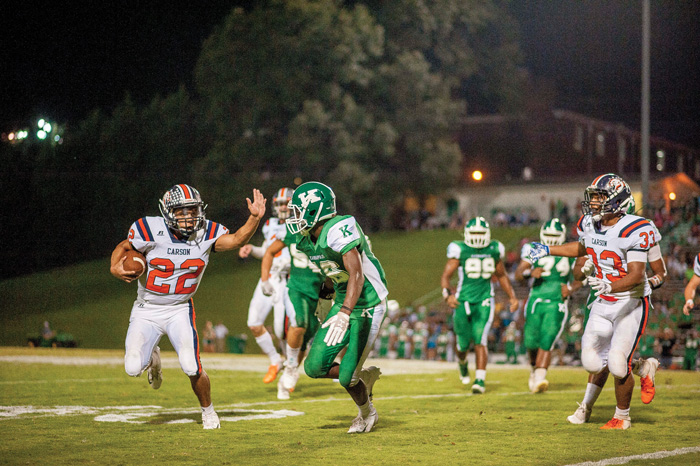 “You see the cuts you should’ve made,” Cipres said. “I can see now that I should’ve done this or done that.”

Cipres made all the right cuts, all the right moves in Friday’s 57-30 North Piedmont Conference win against North Iredell, in which Carson broke school records for points and rushing yards (442).

Cipres — pronounced Cypress — rushed for 200 yards on only 11 carries. He put the ball in the end zone four times to tie the school record. Shaun Warren produced three four-TD games for the Cougars in 2010, while Jacorian Brown had one. Darren Isom accomplished the feat twice during the 2014 season.

Cipres had all four touchdowns in the books by the middle of the third quarter. He scored on runs of 7, 59, 8 and 51 yards. He had another long TD jaunt called back by penalty.

“I guess the second touchdown, the long one, was the one I remember best,” Cipres said. “Just great blocking, our guys pushing the North Iredell guys to the outside. I was headed outside, but I saw the lane and bent the run back.”

Almost always a run-first program, Carson has had feature backs in the past, athletes such as Warren, Brandon Sloop and Isom. Right now it’s a committee, with three guys — Cipres, Michael Gonsalves and Hunter Courtney — sharing the two halfback spots, and CP Pyle operating at fullback in the full-house backfield, with support from Evan Johnston.

“Gonsalves runs with a lot of brute force, Johnson is a guy who can get us 4 or 5 yards, and Pyle and Courtney have quickness,” Carson head coach Joe Pinyan. “Cipres gives us a little of everything. He’s got a little bit of quickness, and he can break tackles.”

Cipres had a career-high 13 carries last season against Salisbury. The 11 carries he got Friday were a season high. Usually he gets seven or eight touches. He’d had two previous 100-yard efforts, but Friday’s performance was a career outing by a lot.

“My brother (former Carson DB Luis Cipres) said after the game, ‘Isn’t North Iredell the same team you had a big game against last year?’ I told him it was, but this time I doubled the yardage. I couldn’t believe it myself, but things just happened for me. That’s a lot of  yards.”

Last season at North Iredell, Carson snapped a five-game losing skid by winning, 26-13. Cipres had 11 carries for 105 yards and a touchdown and was honored by an Iredell insurance agency as the offensive player of the game.

Last season, Cipres was operating at fullback, the bread-and-butter position in Pinyan’s offense, and the guy who usually gets the most carries. Now he’s a halfback, but he’s making the most of every opportunity. He has 441 rushing yards for the season. He had 373 all last year.

“He’s our only senior running back and he’s been a good leader,” Pinyan said. “He’s not a rah-rah guy, but he’ll lead by example and the younger guys look up to him. He’s blocked so well this year and he’s given us a complete effort every game. He’s a do-your-job kind of guy.”

Patience is key for running backs. Cipres used to dart toward the first potential crease he saw, but now he’s waiting longer. He’s giving everyone a chance to make their blocks, he’s reading those blocks, and he’s seeing the field more clearly. The result has been more big plays and an impressive 8 yards per carry.

Cipres played at about 160 pounds last year, but he’s a sturdy 180 now. Part of that is normal maturation and part of it  is the school’s weightlifting program.  Cipres has also put in extra work. He and cornerback Thairell Parks are headed to the Marines after graduation. They’ve been preparing physically for military service.

“Thairell introduced me to the Marine workout he does, and it’s made me stronger and faster,” Cipres said.

Carson survived the most challenging part of its schedule — a four-game, non-conference losing streak to A.L. Brown, Davie County, North Rowan and Central Cabarrus — but the Cougars knew it was coming. They went through the same grind last year. Now they’ve reached the NPC part of the schedule, they’ve started 1-0, and the league appears to be wide open.

“Playing those tough teams definitely made us better and now we’re ready for what’s ahead of us,” Cipres said.

High school volleyball: Carson gets even, ties West for…