Column: NASCAR must push its newest winners into superstars 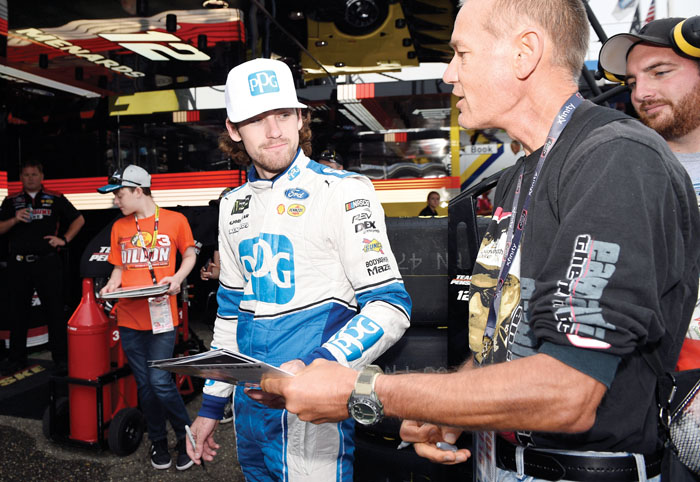 CHARLOTTE (AP) — A race car driver can have all the personality in the world but skills not much better than an old moonshine runner. Or a driver might be the second coming of Richard Petty himself, then fail to transfer any of that on-track energy into a sponsor appearance.

Sometimes a driver is the perfect mix of talent and marketability, yet get stuck in mediocre equipment or a team on a slide. It’s hard to build a fan base with a car that can’t compete.

NASCAR got a true gift when Chase Elliott and Ryan Blaney — YOUNG GUNS! — put together back-to-back playoff victories. The two are part of the next generation of NASCAR superstars, but marketing that becomes difficult when the drivers don’t win.

The hard part temporarily over, NASCAR must now go to work on making America care about these fresh faces.

The task isn’t too hard with Elliott, the 22-year-old son of Hall of Famer Bill Elliott. Ol’ “Awesome Bill” won NASCAR’s most popular driver award 16 times before he removed his name from balloting. All those fans flocked to Dale Earnhardt Jr., but he’s retired now so Chase Elliott automatically got his Daddy’s fans.

Still, Chase Elliott is never going to be the next Jeff Gordon, a pop culture icon and crossover in sports, media and entertainment. Elliott doesn’t have the personality for it — remember, he’s Bill Elliott’s kid and Bill Elliott was hardly the most verbose driver of his time. The appeal of the younger Elliott is largely for fans who already enjoy NASCAR.

Blaney is a third-generation racer and North Carolina native who does have the personality to draw new fans. When Hollywood sends a young starlet to the race track to promote a project, NASCAR does its best to get a meet-and-greet with Blaney because he’s current and capable of engaging in a topical conversation.

NASCAR has a slew of Blaneys and Elliotts — there is Daytona 500 winner Austin Dillon, his younger brother, Ty, Kyle Larson, and Bubba Wallace, the only black driver at NASCAR’s top level. Consecutive wins the last two weeks from two of them has simply underscored the pressure the series has to make these drivers relevant.

Some of the drivers, including Blaney, have made a point recently to pick a child from the stands as the recipient of the checkered flag. When Blaney won two races ago at Charlotte, he gave the flag to a little boy in Kyle Busch gear. The next day, the father brought his son to the Team Penske shop, where the boy not only got a T-shirt of his new favorite driver but but they got to meet Blaney and pose for pictures, too.

The day before Blaney’s victory, 17-year-old Hailie Deegan became the first woman to win a NASCAR K&N West Series race with a bump-and-run move on her own teammate. She earned a bright yellow trophy in the shape of a water tower that weighed about 50 pounds and it immediately became her most prized possession.

The trophy went with her the day after her victory — on a pair of commercial flights, shoved under the seats in front of her. Her victory celebration was a long day of travel to get to North Carolina to promote the win.

Deegan was feted all over the NASCAR community and wrapped up her time with a stop in the studio at Fox Sports 1. As she was leaving the studio in her rental car, she captured for her social media followers a helicopter landing with another NASCAR driver arriving for his studio appearance. With a laugh, Deegan praised her Toyota Camry rental car.

Fans can’t relate to the many NASCAR stars because they stopped being blue collar as soon as they bought million-dollar motorhomes to give them a haven away from the public at the tracks. Then they got private planes to get out of the track as soon as possible.

NASCAR needs to reshape the image of a successful race car driver and make the fans care about them once again. The first step is turning them loose for the public with the expectation that the drivers start working a little bit harder to sell themselves as the future of the sport.