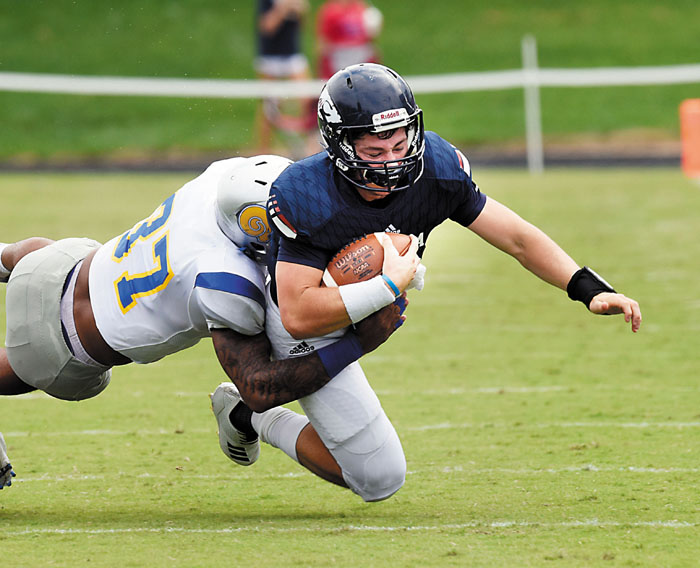 That basically means that Carlton is going to be out for a while, but the Indians expect/hope to have him back at some point this season.

Catawba (1-4, 0-2) moves forward into Saturday’s South Atlantic Conference night game at Wingate with nothing to lose, everything to gain, and with redshirt freshman Ken Avent III at the controls of the offense.

“Ken is our starting quarterback now,” Walker said. “We’re excited about what he can do with his arm and his legs. We’re confident he’ll give us a chance to win.”

When Avent III was recruited by the Indians in 2016, it was with significant fanfare. Growing up in the small eastern North Carolina town of Faison, he had an intriguing career at James Kenan High. He was the backup quarterback as a freshman on the 1AA state champs. As a sophomore and junior, he threw 50-plus touchdown passes and piled up major rushing yards for strong teams that reached the fourth round of the state playoffs. The team wasn’t as good his senior year, but he was a late addition to the Shrine Bowl roster. His father, Ken Avent Jr., was on the N.C. coaching staff.

Avent III was coached in high school by his father, who had thrown 33 touchdown passes for Catawba from 1990-93 and was the 1993 SAC Offensive Player of the Year. One of Avent Jr.’s  Catawba teammates was linebacker Curtis Walker, who now pilots the program. So there were all sort of connections and family ties.  His signing was a big deal.

“Knowing my dad had some success at Catawba definitely was a factor in recruiting,” Avent III said. “He and Coach Walker are friends, and Catawba has always been a comfortable place for me.”

Avent  is an exceptional athlete with a sharp mind. He was a fine baseball player (shortstop/pitcher) and a decent basketball player in high school and was recruited with the expectation that he’d be the starting quarterback  for the Indians at some point. He was exceptional running the scout team in 2017 as a redshirt.

He and Carlton waged a competition for the starting QB job last spring and in preseason camp that was close, Walker said, although the Indians opted to go with the bigger, more experienced Carlton.

“Reid is a great guy and we’ve always pushed each other on the field and in the weight room,” Avent III said. “You always want to be the guy, but coming into this season as the No. 2, I just tried to take that role and run with it the best that I could.”

When Carlton experienced tough sledding against a rugged West Georgia team in the 2018 opener, Catawba made a change at QB, hoping to get a spark from Avent III. It didn’t happen that day, as Avent was 3-for-16 for 21 yards and tossed his first college interception.

“They were really good, and I was a little nervous,” Avent III said.

When injuries kept Carlton on the sideline last Saturday against Albany State, Avent received his second chance and performed well enough to earn the confidence of his teammates and the coaching staff. He was close to flawless in the first half (10-for-12) and finished  19-for-32 for 239 yards with one interception and two passing TDs in a 35-21 loss. He also was Catawba’s leading rusher with 10 carries that netted 56 yards.

“It was the first time I’ve started a game in two years, and I had a few costly plays that hurt our cause,” Avent said. “I lost a fumble on a run and threw an interception late in the game.”

It was still a positive day for Avent (6-1, 210). Catawba lost key offensive weapons during the game, including tight end Jourdan Osinskie and running back Demonte Good. That didn’t help him.

“Ken made some plays with his feet as well as his arm and he understood the importance of taking care of the ball,” Walker said. “We’d prepared a package for him that worked very well in the first half. After Albany State made some adjustments at halftime, we ran into things we hadn’t prepared him as well for.”

This will be a big week of film study and practice for the 20-year-old Avent, as the team looks to him for leadership against Wingate, one of the Indians’ bigger rivals.

His dad has offered some advice.

“He’s really a pretty quiet guy,” Avent III said. “He reminds me to have fun. He said to stay calm and play my game.”

NOTES: Walker sounded more concerned about Catawba’s defense than the injury-depleted offense. “We’ve got to stop giving up those 70-yard runs,” Walker said. “We’ll play well for a while, but a guy misses  a tackle and  we give up that explosive play. That’s what’s killing us.” … Catawba’s players of the week were running back Kenyatta Greene, who scored Saturday on the ground and through the air; defensive lineman Jordan Hemingway (7  tackles, one sack, one forced fumble) and kicker Lee Brackman, who had three touchbacks. Other standouts were defensive lineman Omar Staley (two sacks, forced fumble) and safety Mike Miller (interception, 9 tackles). … Wingate’s redshirt freshman QB Crocker Shaw was the SAC Offensive Player of the Week, so he’ll challenge Catawba’s defense… Catawba leads the all-time series, 20-14, but has lost eight of its last 10 games against Wingate, many of them in agonizing fashion. … Cornerback Caleb Allen said the Indians “will come together and be on the same page this week defensively.” Safety Chris Thompson vowed the Indians “will be locked in and focused at Wingate.”