Byron York: What should happen to Rosenstein now? 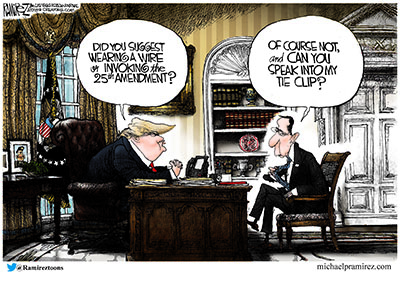 They told Baker what Rosenstein said, according to Baker’s recent testimony to House investigators. And Baker took the news very seriously.

After Rosenstein’s comments were reported in The New York Times last month, Rosenstein sent out word through intermediaries that he hadn’t really meant it, that he was speaking sarcastically. But that is not how top FBI officials took it at the time.

“McCabe, Page and Baker were talking about (secretly recording the president) as a real thing, and discussing it as a serious issue,” said another source close to the investigation.

The Times reported that in a meeting held in the spring of 2017, amid the uproar over Trump’s firing of FBI Director James Comey, Rosenstein “raised the idea of wearing a recording device, or ‘wire,’ as he put it, to secretly tape the president when he visited the White House.”

According to the Times, “One participant asked whether Mr. Rosenstein was serious, and he replied animatedly that he was.”

The Times said Rosenstein also suggested that in addition to him recording the president, other officials could, too. The paper said Rosenstein noted that White House officials did not make him give up his cellphone when visiting, “implying it would be easy to secretly record Mr. Trump.”

There has been some speculation among Hill Republicans that McCabe was behind the story, that he was trying to set Rosenstein up for a fall. Investigators wondered whether McCabe and Page were telling Baker the truth. But at the very least, Baker’s interview shows that Rosenstein’s suggestion was taken seriously.

The Times also reported that Rosenstein “discussed recruiting Cabinet members to invoke the 25th Amendment to remove Mr. Trump from office for being unfit.” One of the sources familiar with the investigation said that Baker, in his House interview, “did indicate that there was strong belief that Rosenstein was coordinating with two people within the administration who were contemplating invoking the 25th.”

The Rosenstein revelations intensified a long-running debate over the possibility that Trump might fire the deputy attorney general. The debate focused not so much on what should or should not happen to Rosenstein but on what effect a firing would have on the work of Trump-Russia special counsel Robert Mueller. With Attorney General Jeff Sessions recused from the Russia investigation, Rosenstein oversees Mueller’s office.

Democrats, and some Republicans, warned Trump against firing Rosenstein. “This story must not be used as a pretext for the corrupt purpose of firing Deputy Attorney General Rosenstein in order to install an official who will allow the president to interfere with the special counsel’s investigation,” said Senate Minority Leader Chuck Schumer shortly after the Times story appeared.

No firing seems imminent. Rosenstein flew with President Trump on Air Force One to Florida Monday. The two men held a 45-minute discussion. After the trip, Trump was asked whether he plans to fire Rosenstein. “No, I don’t,” the president answered.

Trump’s handling of Rosenstein has baffled some Republicans. Here is a top administration official who was at the very least musing about the possibility of bugging the president and attempting a never-used strategy to remove him from office. Some might assume that Trump would fire such an official, effective immediately, and have him escorted from the building.

But there are reasons Trump has not acted, starting with next month’s elections. “One, it’s strategic timing of the midterms,” said a third source close to the investigation. “And two, there are people in the administration who are telling the president that Rosenstein is a good guy and part of the team. These are people that Trump talks to regularly.”

As for Baker, he left the FBI amid controversy in May. And, of course, McCabe and Page left the bureau amid controversy, too. They are just now beginning to tell their stories to Congress. And in the case of Rosenstein and the wearing-a-wire discussion, much more remains to be learned.