Baby Braves bow out in playoffs, but the future looks bright 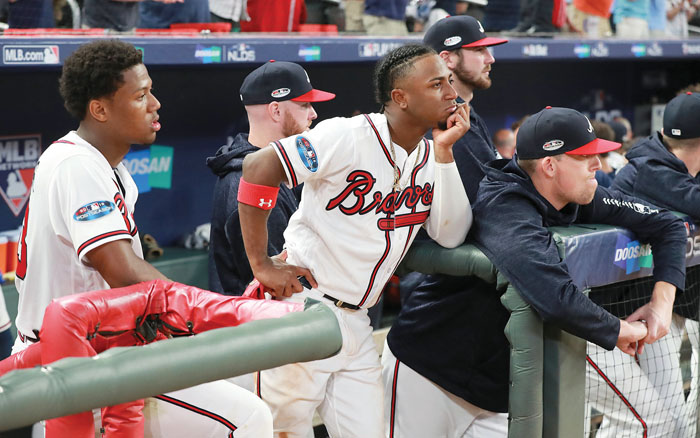 By PAUL NEWBERRY, AP Sports Writer
ATLANTA (AP) — Brian Snitker endured a restless night after the final game of the season.
He was poring over what went wrong for the Atlanta Braves in the playoffs.
He might’ve been thinking about his own future, as well.
“I laid awake all night staring at the ceiling,” the Braves manager said. “I couldn’t sleep.”
After assembling some of baseball’s finest young talent and making a surprising return to the playoffs for the first time since 2013, Atlanta went down quietly in the postseason. The Baby Braves were shut out twice in Los Angeles before the high-powered Dodgers finished off the best-of-five series with a 6-2 victory in Game 4 on Monday.
The brief playoff appearance exposed a team that still has some glaring weaknesses . The pitching lacks a dominant starter, the lineup needs more power, and the bench wasn’t much help at all.
When Snitker looked over at the Dodgers, a star-filled team that earned its third straight trip to the NL Championship Series, he saw what the Braves must strive to become.
“We’re going to get there,” Snitker said, “but we’re not there yet.”
First up: The Braves must decide if their manager will be part of journey.
Snitker is not yet under contract for 2019, though there’s nothing to indicate he won’t return for his third full year at the helm — especially after a season that makes him one of the leading candidates for NL manager of the year.
The decision rests with general manager Alex Anthopoulos, who held meetings Tuesday with Snitker and the coaching staff but wasn’t available to the media.
“Until something gets done … I understand that you’re never guaranteed tomorrow,” said Snitker, who turns 63 next week. “I don’t know. I know I’d like to (return). I enjoyed it. I love that group in there. I like being around ’em. That group in there is awesome. I’ve got a few more years in me.”
The manager expects a quick decision from Anthopoulos.
“He’s not going to string anything out,” Snitker said. “I think by the end of the week I will know something.”
Freddie Freeman gave Snitker a robust endorsement.
“I’d love to have him back,” the slugging first baseman said. “He did a remarkable job. It’s really hard to handle 25 to 35 personalities, and he’s one of the best at it.”
After a massive rebuilding job and three straight 90-loss seasons, the Braves suddenly returned to prominence in large part because of a bountiful farm system led by Ronald Acuna Jr., Ozzie Albies and a seemingly endless supply of dynamic young pitchers.
The 20-year-old Acuna quickly stamped himself as a franchise player after coming up from the minors early in the season, flourishing in the leadoff spot while hitting .293 with 26 homers, 64 RBIs and 16 stolen bases. Only 21, Albies tailed off badly in the second half but still batted .261 with 24 homers and 72 RBIs in his first full season in the big leagues. The lineup also included 23-year-old Johan Camargo, who had 19 homers and 76 RBIs, and 24-year-old Dansby Swanson (who missed the playoffs because of a late-season injury).
Among the 20-something pitchers, Mike Foltynewicz went 13-10 with a 2.85 ERA and made the All-Star Game for the first time. Sean Newcomb was a 12-game winner. Touki Toussaint, Max Fried and Mike Soroka showed plenty of potential in their limited opportunities. Top prospects Kolby Allard and Kyle Wright could be close to breaking through, as well.
Freeman (.309, 23 HRs, 98 RBIs) anchored the middle of the batting order along with another veteran, right fielder Nick Markakis (.297, 14, 93). Center fielder Ender Inciarte and catcher Kurt Suzuki also made key contributions.
“It wasn’t one guy one night and the same guy the next night,” Foltynewicz said. “It was really a team thing the whole year. It was really fun to watch.”
Markakis, who turns 35 next month, is set to become a free agent and may have played his last game for the Braves. Anthopoulos will likely be seeking a player who can bring more power to the middle of the lineup — a shortfall that was really exposed in the series against the Dodgers.
Los Angeles outscored the Braves 20-8, with eight homers producing for 14 of those runs. Atlanta was held to a pair of long balls, including Acuna’s grand slam in Game 3 that accounted for half of his team’s run production.
“We’re not a finished product by any stretch,” Snitker said.
Despite losing its ninth straight postseason series — a streak that dates back to 2001 and is eclipsed only by the Chicago Cubs dropping 10 in a row — just making the playoffs was a big accomplishment for such a youthful team. When Freeman struck out for the final out of the year, the crowd at SunTrust Park gave the Braves a standing ovation.
“It was an incredible experience,” Acuna said. “I definitely had a lot of fun.”
It looks like the fun is only beginning.
___
Follow Paul Newberry on Twitter at www.twitter.com/pnewberry1963 . His work can be found at https://apnews.com/search/paul%20newberry
___
For more AP baseball coverage: https://apnews.com/tag/MLBbaseball